Totally trashed: How Music Midtown generates its own waste 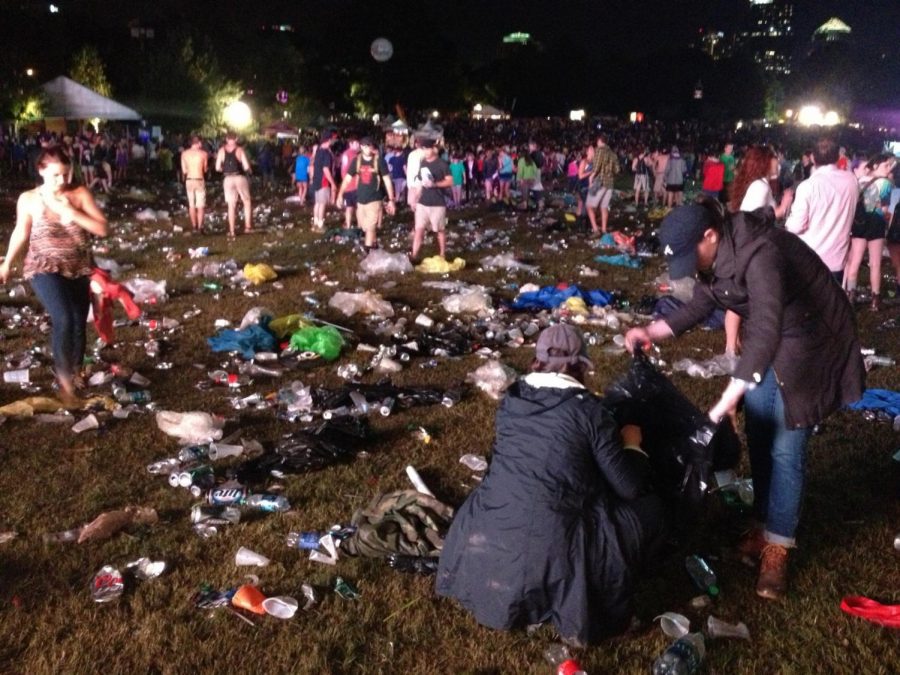 A large amount of the trash in Piedmont Park from Music Midtown comes from plastic bottles.

At the end of the first night of Music Midtown, as the festival goers were stumbling away, I looked out across the expanse of the Piedmont Park meadow. A sea of trash stretched before me. I spotted food wrappers, beer cans, cigarette butts, and, most notably, plastic bottles.
As a cross country runner who appreciates the beauty of the park every afternoon, I was disgusted by the sight of the endless liter. Unfortunately, the organization of Music Midtown seems to almost encourage this volume of littering, especially with plastic bottles.
The problem begins when entering the festival and facing the unnecessarily stringent regulations on permitted items. The only water container allowed, for instance, is a sealed plastic water bottle or an unfilled reusable water bottle.
With only four water stations supplying thousands of people, waiting to refill a water bottle takes at least half an hour?not to mention the excruciatingly slow rate the water is dispensed. Waiting behind people with Camelbaks is particularly painful. Bringing a plastic water bottle thus seems to be the better option.
And when this water is gone, what’s a person to do, if they’re in a rush to see the artist they love? They buy another plastic water bottle. For the shortage of water stations, there are plenty of vendors hawking cold water bottles for $5 each.
When the bottles empty, there are suspiciously few trash cans to dispose of them in, let alone recycle bins. The meadow of Piedmont Park is ringed with trash cans, yet almost all of them lie outside the fence. The few that are accessible quickly overflow. When a person is crammed in with thousands of other bodies, no trash can in sight, the ground becomes the best option.
This issue is not exclusive to bottles either. Music Midtown refuses to allow even small snacks past their otherwise shoddy security, encouraging festival goers to purchase overpriced festival food in disposable containers that are likely to be left on the ground.
Music Midtown attendees may not consider waste disposal to be their first priority, to say the least, but  the large quantity could at least somewhat be decreased if the organizers took into account their role in generating it.