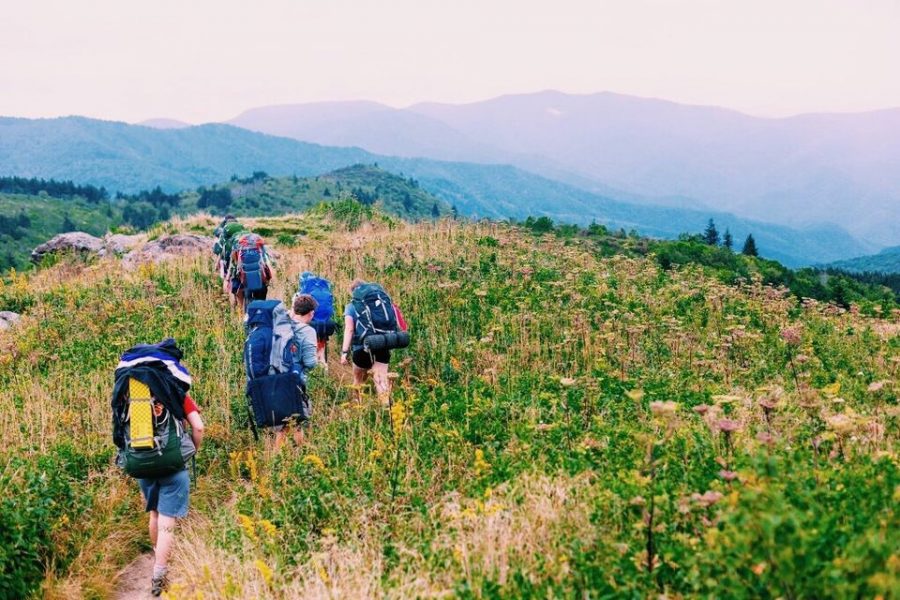 Students at The Outdoor Academy go on three treks throughout the semester.

Imagine going without your phone for an entire semester.
Many teens would avoid this scenario by whatever means possible, but for Grady senior Grace Schneider, going without technology was insignificant compared with the benefits of attending the semester school, Outdoor Academy.
“[Outdoor Academy] was one of the most powerful, life-changing experiences I’ve ever had,” Schneider said. “It was incredible.”
Grady is one of 241 schools sending students to Outdoor Academy, a branch of the Eagle’s Nest Foundation, or ENF, which is located outside of Brevard, NC. Executive Director Noni Waite-Kucera describes the goal of ENF as “helping young people starting as early as age 6 to connect to the natural world and connect to the community and be their best self.” ENF also has a summer camp, Camp Eagle’s Nest. Camp Eagle’s Nest was started in 1927, and Outdoor Academy began in 1994.
“We saw the immense growth that was occurring for young people in the summer camp environment, and we said to ourselves, ‘Wouldn’t it be amazing if we could also go to school here in this environment and be able to immerse into a program like this, where your community is really small and really strong and where people can really commit themselves and discover who they are’,” Waite-Kucera said. “So that’s why we started the school, to provide that little place in the woods that can be a center for that.”
Outdoor Academy connects with this goal as it aims to educate students with a mix of academics and outdoor activities. While there, students take part in activities such as backpacking, hiking, and canoeing alongside regular academics, and most classes are outside. The campus has 180 acres, much of which is forest.
“Although I like going outdoors I don’t have a lot of skills because I haven’t done that much like backpacking or camping with my family, so I definitely want to gain skills about survival and backpacking in general,” said sophomore Mia Prausnitz-Weinbaum, who is attending the spring semester at Outdoor Academy.
Students choose to attend either the fall or spring semester. While Prausnitz-Weinbaum chose the spring semester for a variety of reasons, the lacrosse season in the spring caused Schneider to choose the fall semester. Both have their pros and cons.
“For me picking spring [semester] was a pretty easy decision because it seems like it would be really hard to come back spring semester having missed everything from fall semester,” Prausnitz-Weinbaum said. “Also, I’m missing things like standardized tests which are not fun.”
Waite-Kucera and Schneider both agree that the people in the Eagle’s Nest community greatly build on the experiences there. Schneider says that she still communicates with some of the people she met every day, and Waite-Kucera enjoys the company of her coworkers. However, everyone who goes is different.
“I’m always surprised by the people who come,” Waite-Kucera said. “If anything it’s people who have a strong quest for trying new things, but we get people who are really outdoorsy, who have grown up backpacking and canoeing and climbing their whole lives, and we get people who have never even gone camping. So it can go from A to Z when you’re looking at the outdoors part of it.”
Though there are no personal electronic devices allowed in order to better fulfill the purpose of Outdoor Academy, students can communicate with friends and family through letters and the communal phone on campus.
“I kept in contact with friends through letters and using the landline,” Schneider said.
The overall experience provides lasting effects on attendees, according to Schneider, and reaches ENF’s goal of building character in teenagers.
“[Outdoor Academy] has made me a much more authentic and self-reliant person,” Schneider said. “I learned how to be present and be open minded in any situation.”