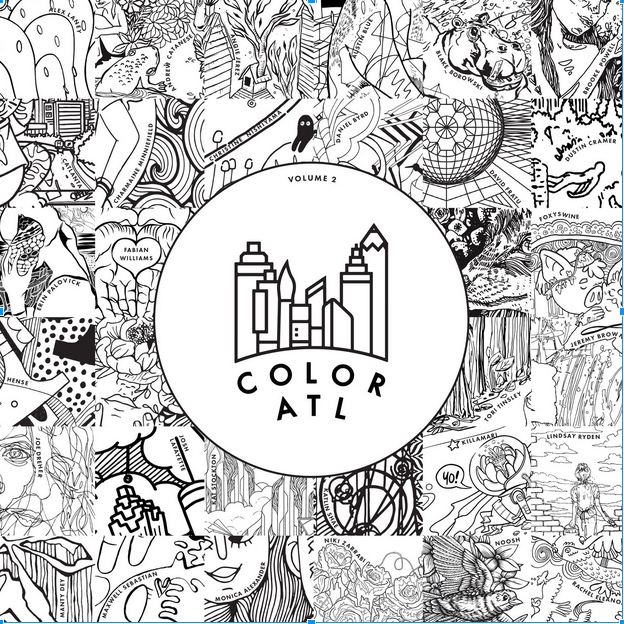 The cover for ColorATL Volume 2 previews the works of artists inside. (Image courtesy of ColorATL)

Until recently, coloring books were thought to only be for children. Then, the adult coloring book craze swept the nation, as adult coloring books were proven to relieve stress. Artist William Massey noticed the trend and decided to create his own coloring book, ColorATL.
But this was no ordinary coloring book. Massey decided to use his coloring book for a specific purpose, and with the help of over 40 artists and co-founder, Amber Guinn, Volume 1 of ColorATL was released in 2016.
“It took me about a year to actually believe that I could do it, with the help of others,” Massey said.
ColorATL has many objectives. Primarily, it aims to help people in difficult situations by giving them a chance to create and a way to better connect Atlantans with their local artists. Massey got the idea to form ColorATL in part from his background in art therapy, when he worked in places like nursing homes, homeless shelters, and hospitals.
“I saw how really powerful art can be when people are in a hard situation in life,” Massey said. “When they can create and they’re stuck in a hospital bed and they’re just in physical pain, making art can help them feel free.”
ColorATL and adult coloring books in general also introduce people to art.
“I am a true supporter of their goals,” portrait artist and art teacher Tiffany Charesse, who contributed, said. “I believe that coloring is indeed a stress reliever and creative outlet to many. I also love how ColorATL is cultivating a family of creatives through the project.” Charesse met one of ColorATL’s cofounders at an art show she had exhibited at.
Volume 1’s release was a success. In fact, artists requested to be included in a second version before it even launched. This prompted Massey and Guinn to continue with their project, and the launch party for Volume 2 was on Oct. 25, 2017 at Ponce City Market. They collaborated with 42 Atlanta-based artists for the final product.
“ColorATL posted a Call for Artists on their Instagram/Facebook pages, and I decided to apply, and they accepted me,” illustrator Christine Nishiyama said. “I’m proud to be included in an organization like ColorATL.”
ColorATL helps the community with a 1:1 system in which for every book someone buys, another book goes to one of their partner organizations, which includes Piedmont Hospital, Scottish Rite, and Children’s Miracle Network. In this way, it is able to better reach those who are struggling.
The process of creating the book took around six months. After contacting artists and explaining the idea, the artists created different works and designed them in such a way that they would be sufficiently relaxing to color in.
“I actually ended up making something else entirely first, but William pushed me to keep going and refine the piece more, which I’m so thankful for,” Nishiyama said. “After a few rounds of revisions, it’s much stronger and much more me than that first attempt.”
Then, the ColorATL team had to design the layout of the pages so that they would look more cohesive. Each page also had an author’s bio and description of the work opposite it. Finally, the pages were sent to the printer.
The result of all this hard work is a cross-section of Atlanta’s art scene. All artists have different styles and different approaches: Nishiyama produced an illustration inspired by fungi, Charesse produced a portrait an abstract portrait of two of her students, and artist Nikki Zarrabi produced a drawing of roses melting down the page.
“There’s as many different styles in the book as there are artists,” Massey said. “Flipping through, we have graphic designers and street artists and fine artists and novelists and illustrators and sculptors, so there’s every style you can think of in there. It’s our mission to show the vast creative landscape of Atlanta.”
Despite these differences, though, all artists have the commonality of a love for art, which lends to passion for the project.
“It can be therapeutic and helps me understand my place in the world,” Zarrabi said. “It can allow people to really think more freely and make more discoveries.”