the Southerner Online • May 31, 2021 • https://thesoutherneronline.com/82229/comment/decision-to-reorganize-school-schedules-unthought-out/

School day schedules should not be changed 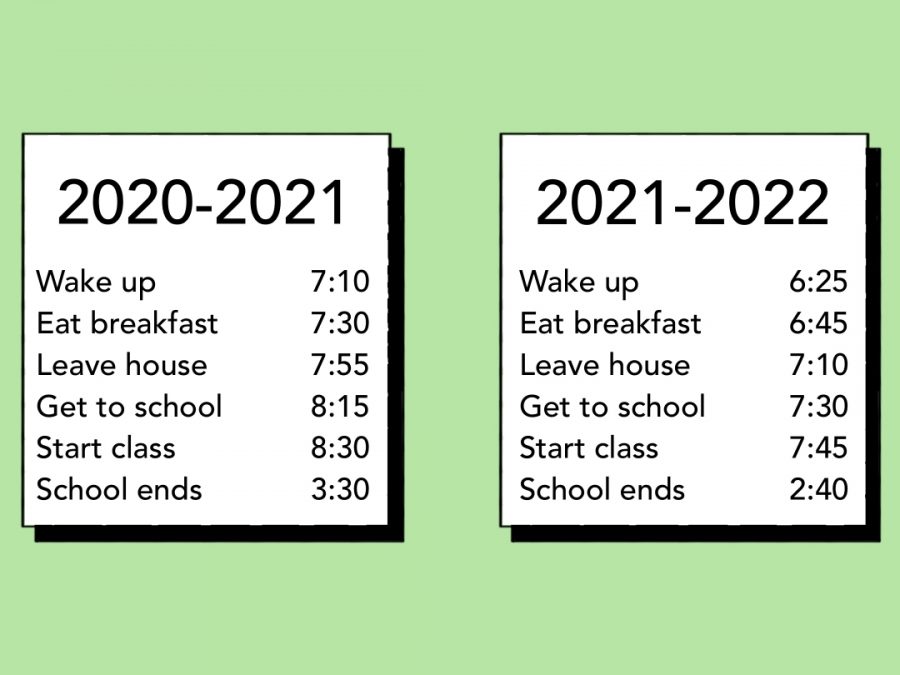 Due to the new schedule for next year, students will have to use a new morning routine.

Atlanta Public Schools released a memorandum in early May stating the district had decided to change the start and end times for elementary and high schools for the 2021-2022 school year. However, this announcement generated a lot of pushback from the community and since then, APS has released a survey asking for input. Changing the high school start time to 7:45 a.m. as opposed to 8:30 a.m. and making the elementary start time later would not be beneficial for APS students.

Waking up an hour earlier than normal is not something high schoolers will enjoy and it is not healthy. According to the CDC, 73% of high school students are not getting enough sleep as it is, and moving the school start time up will only worsen this sleep deprivation.

If there was a shift, parents would likely have to work around their already hectic schedules to secure pickups and drop-offs at the new times for their children. Especially for elementary level children who naturally wake up early and are less self-sufficient, parents will be left having to navigate taxing logistics.

This added stress would disproportionately affect working and single-parent households. Elementary-aged children who eat breakfast at school would have to wait an hour later than normal for their meal. The burden doesn’t stop there. Parents who have to work early in the morning would have to hire child care for the time they aren’t there, causing a financial burden.

Another group of parents who would be impacted by this change is APS teachers with young children. In previous years, teachers would be able to drop their elementary-age children off at school before going to work at middle and high schools. Now, with high school starting earlier than elementary school, some teachers will not be able to do this and must find other ways to get their children to school.

This potential decision could disrupt the entire system’s schools, there was not adequate community input before the initial announcement. The school board did not ask for the opinions of students, parents or teachers, making the radical announcement all the more shocking. They buried the announcement in a Friday afternoon news dump. In response to parents, students and staff stating they would like a greater say in what the school board decides, the district opened up the survey. Stakeholders in the possible schedule change should take advantage o this opportunity to ensure their voices are heard.

APS’s reasoning for the potential schedule change is supposedly due to a transportation issue regarding the extra 30 minutes added into elementary school days to make up for loss of learning. Virtual schooling has taken a toll on learning, so adding additional time to the day might help recoup learning losses. However, studies show that adding to the school day will not improve academic performance.

Additionally, during the 2017-2018 school year, 30 minutes was added to all grade levels days in APS to make up for lost learning time due to the impact of weather closures that year. As we saw then, the added time did not make a major difference in student learning and just caused for more scheduling stress.

Atlanta Public Schools is also integrating a ‘Three-Year Academic Recovery Plan’ next year to help students get back on track after the pandemic. The plan proposes to add 90 minutes for high school, four days a week to strengthen students’ reading, writing and math skills.

While this will help some students regain the knowledge they lost over the past year, the district doesn’t give schools much flexibility to decide how this will be implemented. At a school like Grady, where students are in math classes ranging from Algebra 1 to AP Calculus BC, it’ll be hard to implement this remediation without causing major inconveniences to students, who are all at different learning points, and teachers, who would have to compose a way to teach students at different learning points. After the district-mandated block schedule (which was thought by many to be a failure), the district should look to options for remediation that avoid the looming scheduling headache of the current plan.

The community is rightfully calling the district out for these seemingly unthought-out decisions. A petition was also created shortly after the announcement of the new schedule asking to reverse the start-time change and already has over 2,800 signatures. The petition cites the CDC’s research on adolescent sleep to strengthen its valid argument. In an online signable letter written to APS Superintendent, Dr. Lisa Herring, parents, students, teachers and community members vocalized flaws and discrepancies in the academic recovery and the schedule change plans. The letter respectfully asks for the plans to be reevaluated and changed to ones that better fit the school district’s goals. While the district should have talked with the community from the beginning, the current survey is a good opportunity for parents, students, teachers and staff to provide feedback.  It is critical the district listens to the very people impacted by its decisions.