the Southerner Online • May 29, 2021 • https://thesoutherneronline.com/82222/news/modified-bell-schedule-prompts-mixed-reactions/ 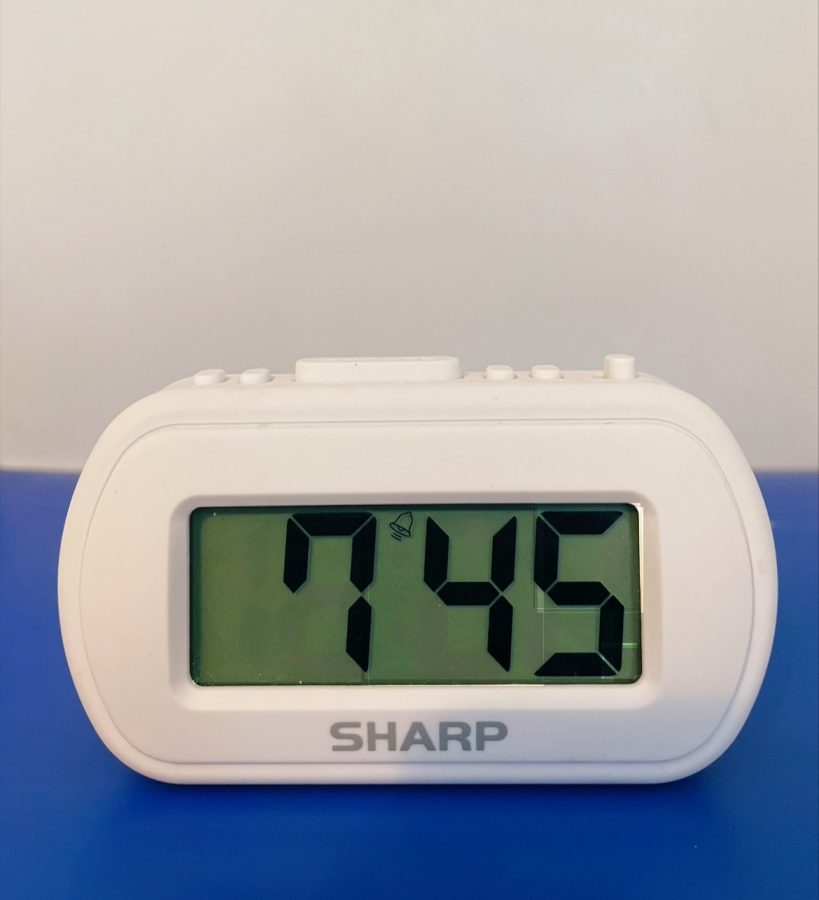 Under the new bell schedule, district high schools would start class at 7:45 am and end at 2:40 pm. The proposed schedule would remain until at least May 2024.

In order to accommodate an additional 30 minutes of class time to make up for pandemic induced learning loss for elementary schools, district schools will have modified bell schedules beginning in the 2021-2022 school year.

Junior Maggie Opsahl was caught off guard by the schedule change announcement.

“It feels like this change is really sudden,” Opsahl said. “I think it would have been nice to see if the Grady community all agreed, instead of this seemingly coming out of nowhere.”

Math teacher Tamela Cosby was also surprised by the announcement of the schedule change.

“My first thought was out of my 26 years teaching Atlanta Public Schools, I have to get up much earlier to teach next year,” Cosby said.

After her surprise faded, Cosby determined that the new schedule could potentially benefit her classes.

“I think what it will do is allow me to have more time after school, so instead of me trying to run away after hours from tutorial I will come and stay a little bit longer,” Cosby said. “I could also probably go to my personal appointments and not miss work or have to get off early. I see all of that as an advantage.”

According to the Parent Memo, the bell schedule was reviewed and changed to “accommodate the needs of [APS] tiered transportation schedule.” Melanie Levs, a parent with three children in APS, was disappointed in the way that message was conveyed.

“The way that Dr. Herring’s letter was written was, ‘This is what we’re doing to accommodate the bus,’” Levs said. “So my friends and I were thinking, what about accommodating the students?”

Levs was particularly upset due to her feeling that APS ignored “obvious and important research.” The research Levs and others are referring to is data that says early start times can have negative effects on student’s physical and mental health as well as their academic performance.

“All you have to do is Google high school sleep or teenagers sleep, then you’ll see all these studies about how they need more [sleep],” Levs said. “That’s really why we were very frustrated and angry because that is just so against research.”

Freshman Brigitte McNulty worries she will have a hard time paying attention in her morning classes due to the new high school start time.

“I have a hard time waking up in the morning and since we have the same first classes every day, I would be zoned out every single time I’m in those classes,” McNulty said. “I feel like that would happen for a lot of people too because most teenagers are not morning people.”

Unlike McNulty, Opsahl said she is already an early riser and that she enjoys having enough time with the current schedule to settle into the day before classes begin.

“I don’t really mind waking up super early, but I like having a lot of time in the morning,” Opsahl said. “I don’t want to be in a rush to get out the door and have to be in school focused at seven in the morning.”

Cosby is not concerned about the ability of her students to stay awake or focused during class.

“If the kids have to drink coffee, cocoa, or something to keep them awake I am fine with that,” Cosby said. “I don’t have too many kids sleeping in the morning anyways and I don’t think that will change much.”

Not all members of the community share Cosby’s positive view. Instead feelings of frustration among parents, students, and others are prominent. Less than 24 hours after the memo was sent out, a petition titled “Reverse the APS Decision to Make High School Start at 7:45 AM” was started and posted on Facebook. It has 2,806 signatures at the time of publishing.

“I have seen the petition, I have signed [it], and I have shared it,” said parent Meredith Bass. “I would recommend that all students who don’t agree with this [change] sign it. Student voices need to be heard by the administration.”

Like Opsahl and Levs, Bass was unhappy with how the schedule change was shared with the community, but she remains hopeful that the petition will reach the APS administration.

“I’m being positive and optimistic,” Bass said. “I hope that the Superintendent and the Board of Education will listen to the students, listen to the teachers, the administrators and the parents, and science.”

In response to concern from the community, APS hosted an “Engagement Session” through Facebook Live on May 20 to discuss the Academic Recovery Plan, a key part of which is the changed bell schedule.

Superintendent Dr. Lisa Herringpoke at the session, where she referenced a study performed by McKinsey and Company as the guiding force behind the creation of the Academic Recovery Plan. No information or studies were provided to parents concerned about the schedule change’s effect on teenager’s sleep schedules.

When pressed on the decision making process that went into the bell schedule change, Herring mentioned recent reviews of APS transportation.

“The complexity of the bell schedule, and looking at how we identify what is most ideal is managed within our operations and transportation department,” Herring said. “We look at our bus weeks and we look at what is ideal through a tiered approach as well as our capacity to ensure that our students arrive at school on time.”

Throughout the meeting Herring expressed a desire to stay engaged with the APS community. She provided links to a survey with two possible bell schedule scenarios to gain a better understanding of parents, staff, students and other community members’ position on the schedule change.

“The challenge for all of us as we come out of the pandemic when thinking first about how we take care of our children, is the ability to find common ground on how to do that well,” Herring said. “As superintendent, what I want to encourage and also take ownership of is the chance for us to have more conversations.”