the Southerner Online • May 25, 2021 • https://thesoutherneronline.com/82192/news/grady-mock-trial-places-fourth-at-national-tournament/ 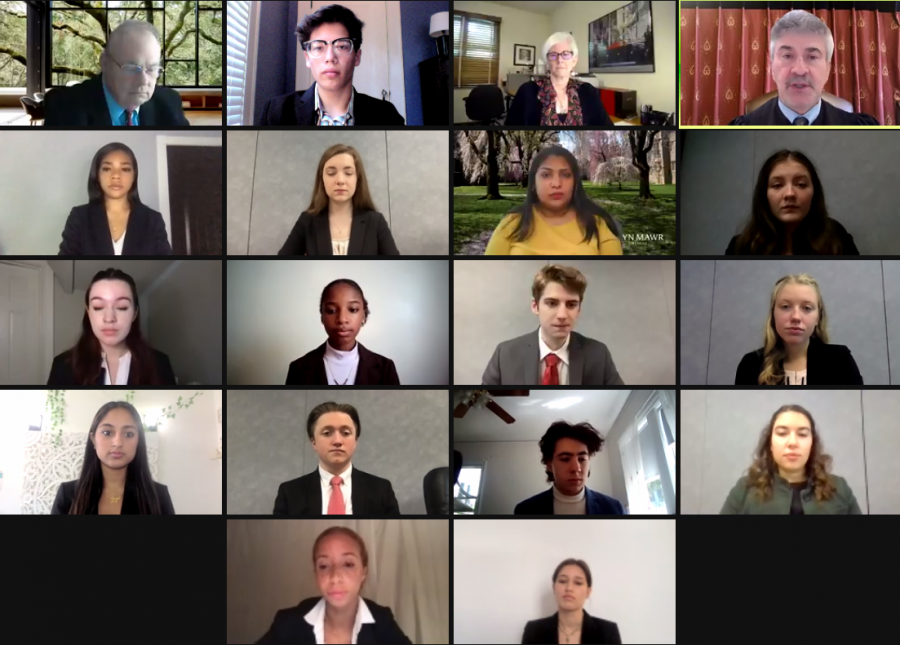 The team competes virtually during the fourth round at the National High School Mock Trial Championship.

Following their win at the Georgia State Championship, the team competed at the National Championship for the 8th time from May 13 through May 15 and was excited to see this year’s hard work pay off.  The team won three of their four rounds, losing only to the eventual national champions.

“I felt amazing,” said senior and four-year mock trial competitor Andre Myette. “It was really satisfying to work so hard over the past four years and then finally make it, not only as Georgia state champions, but then go to nationals and get a top-ten finish and a top-five finish.”

“We felt like we’re going to win state this year,” junior Aaliyah Rapping said. “It was the whole team. We kept saying it, and I think we just had this shared drive to win a state championship, so every time we walked into our courtrooms, we just came ready to win.”

At nationals, Rapping was recognized as an Outstanding Attorney, a distinction given to the ten best attorneys at the tournament. Rapping was the first-ever Grady attorney to win an individual award.

“Seeing that my abilities and what I presented was recognized by the judges to be one of the top people in the nation when it comes to being an attorney, seeing that made me feel really good about myself [and] feel good about the work I’ve done,” Rapping said. “It was really nice to know my name can go down in Grady history to be the first attorney to win an Outstanding Attorney at nationals.”

Senior Kamryn Harty was recognized as an Outstanding Witness at the tournament. This is also the first time Grady students have received both awards at the national level.

“I knew I could be a top witness at Nationals,” Harty said. “Going into the national tournament I was like ‘I really, really, really want to be a top ten witness in the nation,’ and I just tried really hard to master my characters and witnesses and be solid on cross [examination] and I was just so, so, so excited my senior year to finally have that solidified.”

The timeframe of the national tournament gave the team far less time to prepare than other tournaments. Before the state tournament earlier this year, the team also had 11 rounds at other levels to practice. For nationals, however, the team only had a few scrimmages to prepare.

“We got this case [on] April 1st,” Harty said. “With the Georgia case, we have five months to develop it and then we present it over a weekend to compete for state, but this nationals case we literally only had since April 1st so we put a lot of time into prepping this because we only had a little more than a month to put this all together,” Harty said.

Despite numerous challenges caused by the coronavirus pandemic, including virtual practices and competition rounds, Grady mock trial alumna, Elizabeth McGlamry, said she was impressed by the team’s flexibility

“In person. . . [mock trial rounds are] very performative because you’re in front of a crowd and you’re trying to perform to various people,” McGlamry said. “I think that’s a lot harder virtually. . . I came later in their nationals prep and I don’t know what I was expecting but I wasn’t expecting it to be so smooth and fluid, and I think they adapted really well.”

Mock trial coach, Carl Gebo, who is also a practicing government contract attorney said the win was “thrilling”. Senior Zoya Charania, who has been a member of the team for four years, said  Gebo’s influence is a major reason for the team’s success.

“[Gebo] is the reason we made it to nationals,” Charania said. “He has his own [law] practice and a bunch of other businesses as well but he still comes to every practice of ours for hours and hours. We would be on Zoom until 10, 11 o’clock at night and he just coaches us through everything, works with us to figure out our theories, how to get around certain objections and kind of work with our case, and then hear us practice our stuff and improve it as well.”

Team members also attribute their success to the seniors, who have proven themselves as  leaders.

“The past two years, we haven’t had much senior leadership,” Rapping said. “This year we had… a large group of seniors. They’ve been on the team for four years. They’ve been working hard and they’ve struggled to make it to win a state championship, so it was not only the drive from them but also the experience in leadership we had on the team this year.”

Despite the fact many impactful team members will graduate this year, Coach Carl Gebo,  is confident in the team’s future success.

“I am of course aware that we will graduate 8 tremendously talented, dedicated, and experienced mock trial attorneys and witnesses, and they will leave massive shoes to fill for our rising seniors, juniors, and sophomores,” Gebo said. “My prediction: [the team will be] working hard and staying focused so that the heights we hit this season will be our floor next season.”