the Southerner Online • May 25, 2021 • https://thesoutherneronline.com/82144/news/aps-surveillance-testing-reduces-spread-of-covid-19/ 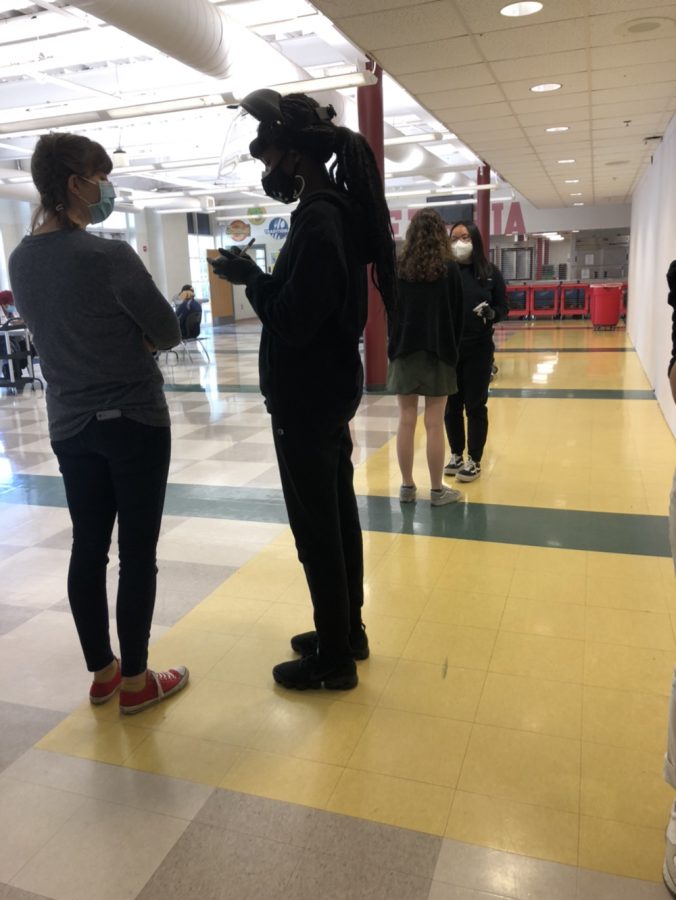 Students participate in weekly surveillance testing at Grady. The program has reduced the spread of COVID-19 in APS schools.

Atlanta Public Schools has partnered with Atlanta-based Covid-19 testing program Viral Solutions for a surveillance testing program to be implemented at district schools.

The program’s goal is to limit the spread of the novel coronavirus within APS schools returned for in-person school by testing students and staff with rapid antigen tests to detect the presence of Covid-19 in individuals regardless of whether they are symptomatic. APS Assistant Superintendent for Student Services, Dr. Katika Lovett, says that the program has been effective at slowing transmission.

“I think it’s been very successful,” Lovett said. “Through the program, we’re able to find people who are in an active infected state and remove them from the greater population so they’re not spreading Covid throughout our school community and the district offices”

“We’re constantly looking for ways to make it faster and efficient,” Lovett said. “The rapid-antigen test that we use now is called a BinaxNow test and it is a much more efficient test. It’s quick and it takes 15 minutes at the most to get a result one way or the other.”

APS is the only school district in Atlanta participating in surveillance testing? According to Dr. Benjamin Lefkove, Viral Solutions co-founder and CEO,  smaller schools are likely doing some level of testing, but no large districts have done so.

“No one in Atlanta, probably no one in the Southeast, to my knowledge is doing this, at least not in a school system of this size,” Lefkove said.

According to school nurse Wanda Taylor, of those who returned to in-person school, only around 80-100 students and staff at Grady o opted into the surveillance testing program. The others have chosen not to get tested for various reasons.

“By federal law, everybody’s information is protected but especially in the setting of COVID-19,” Lefkove said. “There is a lot of stigma associated with it. There’s a lot of fear, there’s the potential for panic. . . we recognize the importance of being sensitive to that in the way that we conduct ourselves with this testing program.”

Testing numbers are low throughout APS. According to Lefkove, only around 35 percent of people returning to school use the testing. APS has attempted to increase testing numbers and prevent misinformation about testing through community outreach.

Lovett says the district has protocols in place should false results occur.PCR tests can be used to check results allowing personnel to make decisions.

“If for instance, you take a surveillance testing, within 48 hours of that test, if you take a PCR test . . . then we can make that determination about whether that triggers quarantine,” Lovett said.

Traci Switzer, Grady’s Healthcare teacher, and a registered nurse said that this protocol wasn’t followed for her test.

“I was informed by the school nurse that I had tested positive,” Switzer said. “I was very skeptical that I was actually positive given the fact that I am vaccinated so I got a PCR [test] on my way home [and tested negative], but I was still told not to return to school for two weeks.”

Switzer says that being told to stay home impacted her ability to teach her students.

“It’s not easy to teach from home,” Switzer said. “I have lots of people working from home in my house so it did affect my ability because I was in a tiny little corner of a room in my house. Everyone else has space and I should have had a classroom space.”

Switzer says that although her students were informed of her positive test, they were not told that she had tested negative with a PCR test until she informed them herself.

While Switzer did receive a false positive test, this is a rare occurrence.

The district is looking to continue the surveillance testing program in the fall.

“Right now we are planning for all things fall 2021 and as a part of that referral, we are looking at continuing the surveillance testing progress,” Lovett said.