the Southerner Online • May 24, 2021 • https://thesoutherneronline.com/82135/sports/tennis-seniors-end-season-on-high-note/ 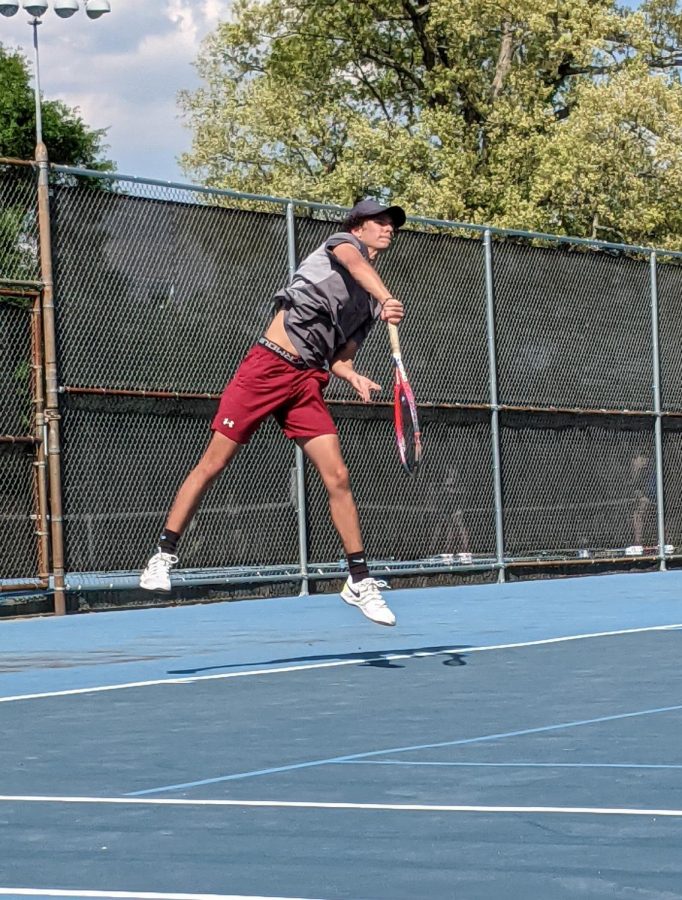 Co-captain, Henry Edmeades shows his dedication to his teams success by practicing to always improve his abilities.

Saturday, May 8 marked the ending of a long journey for the boys tennis team.

The team advanced to the state finals for the second time in three seasons, where they faced Woodward Academy in Rome after a hard-fought season. After a lengthy battle on the courts, Grady lost the match, winning two out of five of the sets. However, the team still returned home triumphantly, as the second-ranked squad in the state in Class 5A.

“I feel great,” Taylor said. “We came this close; next year, we’re going to get them, but it was a great season.”

For the seniors, this accomplishment was the culmination of years of hard work and dedication.

Senior Elliott Willner has played tennis since his sophomore year.

“I initially joined the team because I loved tennis but didn’t have a way to compete all the time,” Willner said. “I also had friends who played tennis, and I wanted to play alongside them.”

Since tennis is largely an individual sport, the team’s success can rely on individual players. However, in events like doubles, more teamwork is required. Willner said Grady is particularly strong in doubles matches, and individual talent is consistent across the board.

“It took lots of time and hard work to develop a hard serve and smart doubles strategy,” Willner said. “Our five doubles players are so close in skill that our two lines actually go back and forth on beating each other in practice. This makes our team super deep and has contributed greatly to our success this season.”

The doubles team’s dominance was evident, as both doubles lines were set to win their matches.

“I think we would have (won) since our doubles lines have been very resilient this season,” Willner said. “Even when down, or having to go to a tiebreak, our players have stayed fighting and won the match.”

The development of all players individually has been crucial this season as the competition for singles was expected to be tough.

“Teamwork and consistency have been really emphasized this season,” Stanley said. “You have to be consistent to play at a high level.”

The singles players struggled against their opponents from Woodward. However, the first and third line singles starters, Ethan Bass and Cooper Cavalier, are both sophomores.

“I actually see a lot of potential,” Stanley said. “The guys playing next year have the drive to do it again … There are supposedly some good incoming freshmen. I think there are some great players.”

Taylor is determined to push her team next year towards this goal, but with a greater outcome.

“Next year, we’re going to be number one,” Taylor said. “So get ready Woodward; we’re coming after you.”

However, for the seniors, state was their last time on the court wearing a high school jersey. The feeling after the matches was bittersweet.

For Stanley, the idea of leaving that coveted position is especially hard.

“It meant the world to me,” Stanley said. “It was a position I really wanted because I wanted to fill that leadership role and to be able to do that and help lead this team meant so much; it’s been my world for two years.”

Senior co-captain Henry Edmeades hopes to leave his team with a final message of encouragement.

“I would tell them that they are all very talented players and that if they put their minds to it, with even more practice they have what it takes to win the state finals next year,” Edmeades said.