the Southerner Online • May 7, 2021 • https://thesoutherneronline.com/81912/sports/girls-soccer-advances-to-state-semifinals/ 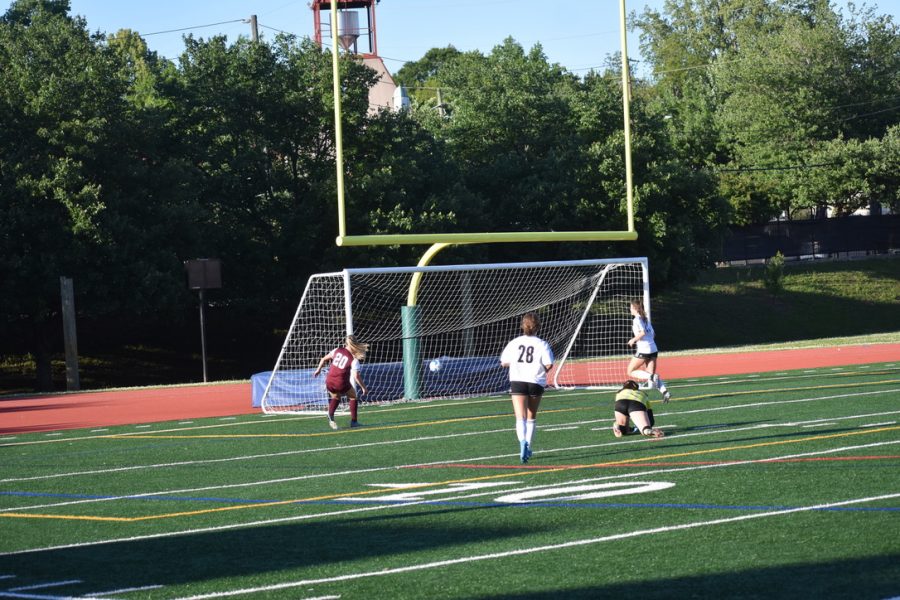 Sophomore forward Maddie Shaw scores off of a bad backward pass by a Starr's Mill defender.

The girls varsity soccer team advanced to the GHSA State Semifinal in a dominating fashion in Thursday’s quarterfinal match against Starr’s Mill. The Knights won 3-1, with goals from three different players.

The game began with a lot of back-and-forth playing between the competitors, and neither team started strong. Possessions switched constantly. However, eleven minutes in, sophomore forward Maddie Shaw stole a weak backward pass by a Starr’s Mill defender to their goalie and scored, putting the first score on the board for the Knights.

As the second half began, the Knights continued to control the possession and eventually capitalized when junior defender Callan Cucchi scored a long goal into the right top corner of the net, putting the Knights up 2-0 with only 30 minutes of playtime remaining.

Shortly after, with 25 minutes left in the half, sophomore forward/midfielder Archer Streelman put the final nail in the coffin for Starr’s Mill with an impressive goal to give the Knights a 3-0 lead. Streelman narrowly missed another shot-on-goal just a few minutes later, but this time the Starr’s Mill goalie was able to prevent the ball from slipping past her into the goal, and saving it just before it rolled across the line.

The game, which had been somewhat chippy the whole time, grew even more so in these remaining minutes as the Starr’s Mill offense became desperate. Their desperation paid off with 14 minutes remaining, and they countered Grady’s 3 goals with one of their own. However, their effort was in vain, as they failed to score any more before the final horn blew to signal the end of the game, leaving the Knights victorious by a score of 3-1.

“I’m a little bit nervous,” Streelman, one of the scorers in Thursday’s game, said. “The goal will just be to do the best we can, though, and hope for a great game whether it’s our last or not.”

The stakes will inevitably be high in next Monday’s contest, and the competition equally difficult.

“I’m happy we had a good game today,” junior forward Grace Porges said. “[Blessed Trinity] has beat teams that we’ve tied or lost too though, so that makes me a little scared about them. I think we’ll have a fighting chance, though, and I’m excited about it.”