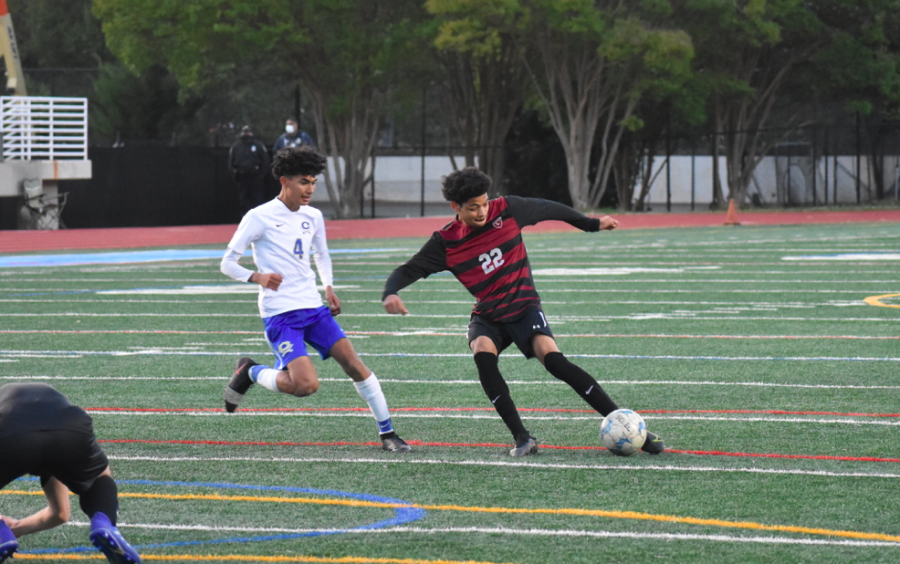 Junior Chase Palmer fires a shot at goal against Cass in the first round of the state playoffs. The Knights ended up losing 3-2.

The boys soccer team finished the season 6-6-2 in all competitions and ultimately lost to Cass in the first round of the state playoffs.

The Knights came out strong and fast,scoring two quick goals and led 2-0 going into halftime. In the second half, however, the tables shifted in favor of Cass, who slotted home three goals to put the Knights away.

“I think we came out strong,” head coach Jaime Bendetti said. “We got two goals early on, and we jumped on that team. I think we could’ve done better with that lead, but it is what it is.”

According to Bendetti, the red card senior captain Gavin Duckett received in the second half was the turning point in the match. Following that red card, Cass went on its scoring streak.

“He’s one of our best players, a captain, a senior and getting him red carded left a huge hole in our backline,” Bendetti said.

Although there were some players that stepped up, it wasn’t the team’s best game, according to Bendetti.

“Thomas Dalzell came off the bench and really provided a spark,” Bendetti said. “Rylan and Griffin on the outside both had solid games, but as a team, it wasn’t our night.”

“We lost a lot of crucial seniors last season, so a lot of people had to step up and they really did,” Anderson said. “We’ve been working together a lot more as a team, whereas last year, we were just relying on certain players to get us to win.”

Likewise, Bendetti said the Knights’ depth of talent gave them a major advantage this season.

“It makes you harder to play,” Bendetti said. “If you’ve just got one or two players that make the team, the other team can just kind of mark them and really dampen the team. But for us, we don’t have a predominant player, so it allows for others to step up.”

Anderson said Bendetti has had a noticeable impact on the team.

“He’s really serious,” Anderson said. “He doesn’t base playing time on a personal level; he bases it on whether you show up to practice or not. He really emphasized the small things that make the team better,”

“[Duckett] brings communication,” Anderson said. “A lot of the time, he’s stopping the players from attacking; he’s a crucial player.”

Bendetti encouraged the team to play aggressive, which is unique in comparison to what the other teams the Knights faced this year did.

“We try to play good soccer,” Bendetti said. “We try to win but also try to play in a manner that is fun to watch and enjoyable. Our game is attacking. We don’t try to park the bus; we go for as many goals as possible.”

Despite a frustrating end to the season, Bendetti is still proud of the team and their accomplishments.

“I’m proud of them,” Bendetti said. “We’re a very competitive bunch and weren’t happy going out in the first round of the playoffs. But if you look at this group, you’ve got seniors who beat Decatur for the first time and made the playoffs [for the first time]. So, while I think we could’ve done better, there were still a lot of milestones we achieved that we can build on.”