Grady class of 2021 to attend their first prom 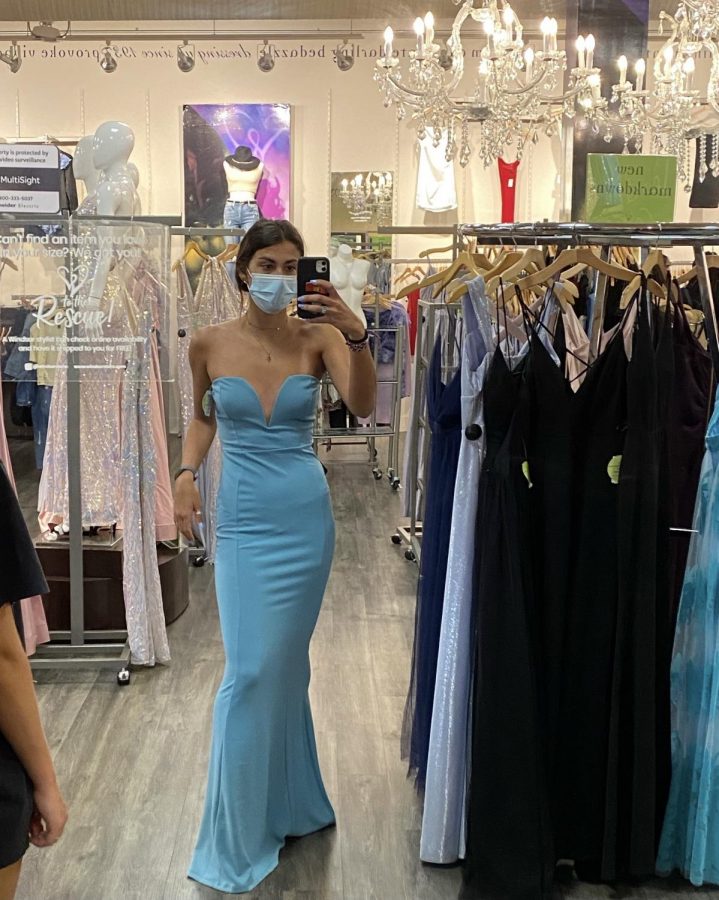 Senior Sophie Ille tries on dresses for the upcoming senior-only prom. The event is on April 24 at the World Congress Center.

After over a year of canceled events and abandoned traditions, the senior class will enjoy a final high school tradition: prom.

The event will be this Saturday, April 24, hosted at the World Congress Center.

“I’m actually really excited because [my friends and I] planned stuff, so we all got our dresses, we’re doing pictures, we have a party bus, and we’re having an after-party and those kinds of things,” senior Sophie Ille said. “I think we’ve been really big on trying to have normal Grady traditions even though nothing’s in person.”

Grady was not planning on having a traditional prom up until the last day of March, when the district announced that high schools in APS are required to offer proms this year.

“I’m kind of still in shock,” Ille said. “I think it was actually really nice that they were able to plan this for us and I’m excited to see what they do with it. Obviously, we’re not expecting much, but I think it’s still nice that they’re doing the gesture.”

Before plans were announced, many seniors had already accepted the fact that they wouldn’t attend a high school prom. Prom was the last thing on senior Lydia Graham’s mind.

“In the beginning, I was a little upset about missing out on a traditional high school prom, but once I started my college process, nothing else mattered,” Graham said. “It consumed most of my days, but I am happy that APS was able to figure out a way to have us all together.”

Graham says attending prom will give her a chance to spend time with classmates that she hasn’t been able to see this past year.

“Last year, a small group of my friends and I put together a ‘prom’ in our backyard for the experience, and we really enjoyed that,” Graham said. “I’m excited to see everyone because our class decided on treating this event as a prom and dressing up in ‘prom’ attire, so I can’t wait!”

Other APS high schools, like North Atlanta, are having traditional proms that include juniors alongside the seniors. Grady’s prom is only open to seniors, and no guests from other schools are allowed to attend.

“I totally agree with the rules set in place by APS/Grady for our prom,” Graham said. “We have to follow CDC guidelines, including wearing our masks, and we also have to show a negative COVID test result which makes sense because we’re going to be in an enclosed space. My friends and I were already going to get tested before going anyways so I’m glad APS made that a rule.”

Students aren’t sure what to expect out of this year’s event, as many have never attended a prom before, and it’s taking place during a pandemic.

“For me, it’s just not something [where] I know what I’m looking forward to,” Ille said. “Yes, I’ve heard about prom, but because I’ve never been to one, I feel like I’m not really holding it to a certain standard. It wasn’t really something I felt like I was missing out on.”

Although juniors won’t be able to attend Grady’s prom this year, they will get their opportunity in 2022.

“I see that the district may have to prioritize the seniors while not risking a COVID outbreak due to a crowded school event,” junior Jack Kast said.

Before APS mandated the prom, the administration, along with Grady prom director Elizabeth Yale, had an idea to plan a senior event.

“It was not going to be along the same lines as a traditional prom, something much more casual and likely outside was already in the works,” Yale said. “The district rented the World Congress Center for each school [in APS], and the district was calling it a prom, so we kind of shifted gears.”

Yale said she typically spends five or six months planning a prom. This year, she has had to do it in just over three weeks, only adding to her workload of teaching full time and coaching lacrosse.

“You have to sign contracts with [event planning] far in advance because there’s so much money involved, and then to come up with floor plans, catering, find a DJ, ordering of supplies, ordering decorations, ordering favor, making tickets available for sale to students, coming up with a price structure, advertising, all of those little moving parts,” Yale said. “All that stuff takes so much time.”

According to Yale, navigating prom this year has been very complicated, especially because she didn’t get to pick the date for the event. Some students felt they didn’t have enough time to prepare for such a big occasion.

“Students are grieving that we lost a member of the Grady senior class the same week that this was decided,” Yale said. “Is it equitable to put these demands, logistics, time, financial on families with three weeks notice, and to a community of students who are mourning the loss of one of their peers? Is that equity? Is that really what our community needed at that time?”

Yale says it’s important that students have positive school experiences, up to and including a prom that they feel is accessible to them.

“Some kids are really afraid of prom, or they feel like prom is not for them based on their school experience, or where they feel like they fit in in the school community,” Yale said. “I wish that I could find a way to tell every student that this is for you. You don’t have to have a date, it’s not about what you’re wearing. It’s about coming and being with people to celebrate the end of this huge part of your life and to get ready for the next step.”