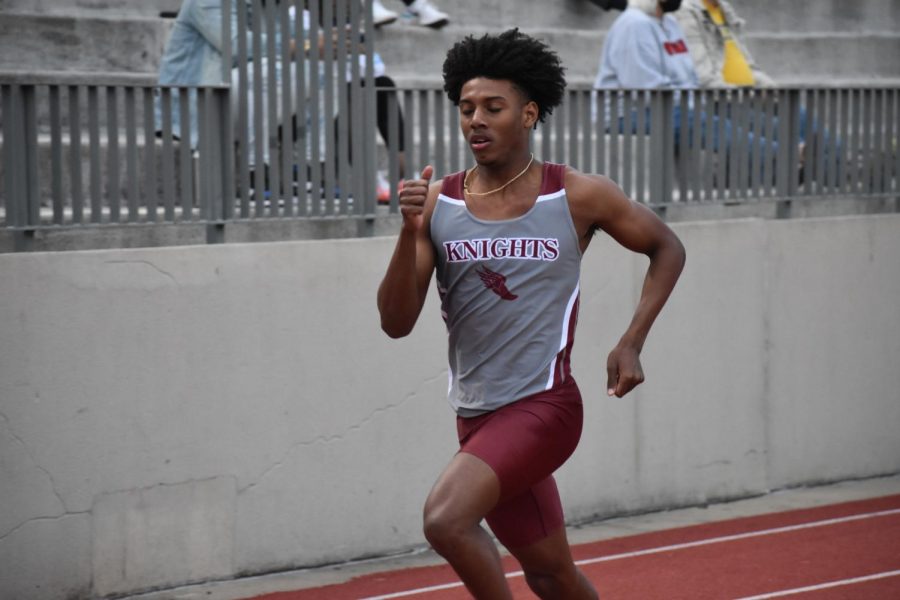 Senior Fred Hamilton runs the 200 meter sprint on March 23th. In this race, Hamilton achieved his PR. Hamilton has also found success in both the 300 and 400 meters as he's ranked highly in both.

The boys track team has found early-season success, currently ranked No. 5 in the state, largely due to seniors Fred Hamilton and Jackson Sexton.

Hamilton has recently found success as a sprinter. He hit his 200 meter PR with a 22.47 in the Rivalries Tune-Up Invitational, hosted by Grady on March 23 and is also ranked third in Class 5A in the 300 hurdles, ninth in the 400 and 6th in the country in the 400 meter hurdles.

“I’ve definitely improved over the last few meets,” Hamilton said. “Hitting a PR in a sprint race is definitely a different feeling than hitting it on a long-distance race. It’s an adrenaline rush.”

Sexton believes Hamilton has not only improved as a runner but as a leader as well.

“Fred has gotten better and with the fact he’s become more of a leader. It allows us to improve the level of talent through the rest of the team,” Sexton said.

Earlier in his Grady track career, Hamilton ran longer races;however, head coach Delbert Ellerton switched him into shorter events. Ellerton believed he had more potential in the shorter but much faster events.

“Fred started as an 800 meter runner,” Ellerton said. “He was moved into the hurdles at the end of his sophomore year when something clicked into my mind: he was in the wrong event.”

Like Hamilton, Sexton has also found success during his senior year, but it has not been without tribulation.

“Freshman year, I was one meet away from making the state track meet but hurt myself,” Sexton said. “My sophomore year, I wanted to come back really strong, but that didn’t go as planned. That did provide a lot of motivation to get continuously better, and I think that molded me into the runner I am today.”

Hamilton notices the impact Sexton has on the team.

“[Being nationally-ranked] was really an honor,” Sexton said. “It was crazy to think that my name was at the top in the country. It was just pretty impressive.”

As individual success continues to roll in for both runners, Ellerton heavily relies on the duo for the success of the team.

“The biggest thing with them is that they’ve improved to the point where how the team does is highly dependent on how they do,” Ellerton said. “The bulk of the points where we could really score come from the events they’re in.”

Ellerton also counts on the pair to keep pushing themselves and to be prepared for big races and events later in the season.

“They’re a very important part of what we’re trying to do this year,” Ellerton said. “ When we get to the end, being mentally prepared to try to do the things we expect seniors to do to carry your team.”

As seniors, Hamilton and Sexton are responsible for setting an example for everyone else.

“[I try] to constantly motivate people,” Sexton said. “It’s not an individual thing. You have to make sure everybody is in the same mindset. I try to make them reach a competitive level I know the whole team can achieve.”

Junior long-distance runner Everett Schroeder said Sexton and Hamilton are vital to the team, both as leaders and competitors.

“Fred and Jackson mean a lot to the team,” Schroeder said. “They are leaders for everyone on the team due to their abilities and their experience. They help push me and everyone else on the team to be the best we can be.”

Because the two have run together their entire Grady careers and partially through middle school, Sexton said their relationship as teammates has strengthened.

“Honestly, he’s like a brother to me,” Sexton said. “I mean, we’ve run together since seventh grade, and I think we’ve grown a serious bond. I don’t know where you can really find that match.”

Outside of Grady, the two have found success on the track.

“Summer of 10th grade, we competed in the Junior Olympics,” Sexton said. “We competed in the 400 meter hurdles and were on the same relay team. We placed fifth, which was really impressive, and I think that’s only strengthened the bond we have.”

While the two are close friends, competition fuels their relationship.