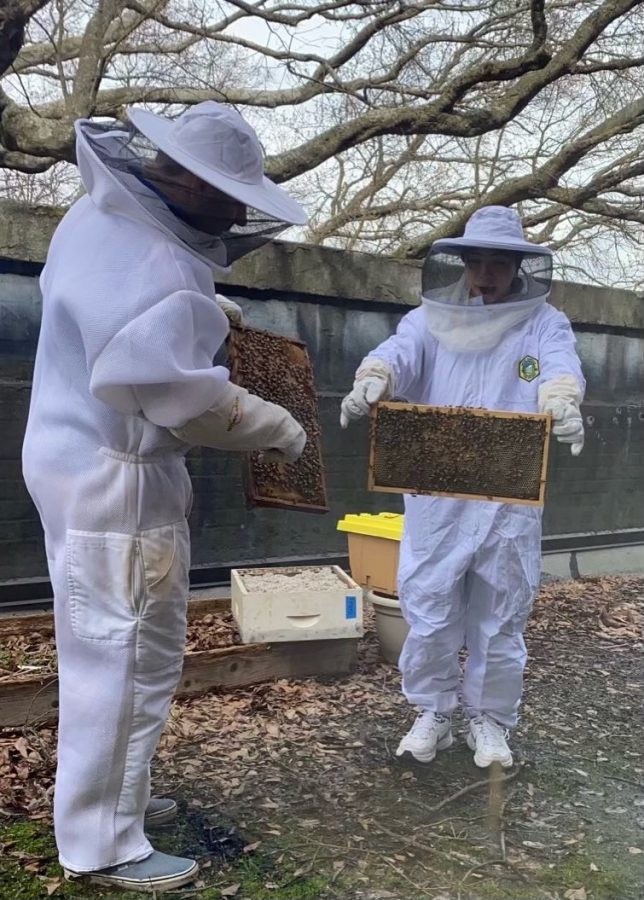 Grady apiculture club member Neisha Ball stands with Ben Sellers last year at a club meeting as they prepare to spin honey. Due to Covid, this widely-enjoyed, hands-on club hasn't met since the 2019-2020 school year.

On Thursday afternoons of past years, some students would make their way to room C-404, which housed science teacher Ben Seller’s classroom and Apiculture Club.

Apiculture Club, commonly known as “Bee Club,” is usually a fun time for student interaction with bees outside the classroom, but this year things look very different as the club hasn’t met since March of 2020.

“I miss Bee Club a lot; it’s my favorite club,” Ben Sellers, club sponsor said. “I created Bee Club because I’ve been keeping bees for 10 years, and I just think it’s super cool. There’s a lot involved with beekeeping in terms of the jarring of honey and the spinning of the honey. Last year, we had several people at meetings just painting bee boxes. It incorporates so many different things that [are] just fun.”

Former Bee Club president, Will Meyer, was involved in Grady’s Bee Club for two years before he graduated in 2020.

“I for sure miss Bee Club,” Meyer said. “It’s a nostalgic time in my life to remember. I go to UT Chattanooga now, and unfortunately, there is no apiary. If there were, I would definitely get involved. I miss beekeeping, and as soon as I have a place to keep some bees, I will definitely invest.”

The club has revolved around the hive system on the rooftop adjacent Sellers’s classroom. Last summer, the beehives were moved to the Virginia Highland home of Megan McCloskey, who teaches environmental science at Springdale Park Elementary.

Honey was extracted from the hive at McCloskey’s house until hive beetles and their larvae invaded and began eating the honey in the comb. The beetles’ hard shells didn’t allow bees to sting and get rid of them. Conditions on the Grady rooftop weren’t desirable, so the bees absconded, leaving Sellers without any bees.

It would be difficult to gather a bee club with Covid-19 restrictions.

“[It is] not a year for bee-keeping club, unfortunately,” Sellers said. “It’s very hands-on, a ‘get out there and do it’ kind of club. I don’t think we’d be able to meet, even if I had bees, honestly.”

Georgia Institute of Technology is a little over a mile from Grady and also houses an apiculture program, focusing more on the big picture of bees and their environmental aspect than Grady. Sellers isn’t aware of any other high schools with a Bee Club, describing Grady’s program as “unique.”

“The main reason we keep bees is because they are fascinating creatures,” Jennifer Leavey, Director of the Georgia Tech Urban Honey Bee Project, said. “They act as sensors for environmental conditions because they forage across several square miles and bring back nectar, pollen, propolis, and water, which reflect the diversity of plant life and climatic conditions. But you can’t discount the sweet and delicious bonus of harvesting honey.”

“We were just starting a large experiment when campus shut down, and we are repeating it this spring because we couldn’t finish in 2020,” Leavey said. “Also, we have paused our volunteer program down because of the risk of Covid exposure. We have offered a few online beekeeping classes, but it is not the same. Unfortunately, it is hard to keep a six-foot distance around a beehive with very many people, and it is very hot to wear a beekeeping suit and a mask.”

Honey produced before the Grady bees left, as well as the beeswax lip balms produced from the hive, were sold at the Grady Parent Teacher Student Organization (PTSO) virtual auction in late February. Springdale Park has been supportive of Grady’s Bee Club, and this year, Sellers is splitting profits with them.

“We’re going to get enough money from the auction to buy two new hives of bees and some materials for lip balm in the future,” Sellers said. “I would say we’re making less this year, but it doesn’t really matter. Bee Club doesn’t need a lot of money.”

Sales management of bee products has been simplified this year as well.

“Previous years, I sold it to the front office to the PTSO, but this year, I actually just kind of gave all the honey and the lip balm to Meghan McCloskey and she got it over to the table for the auction,” Sellers said. “So, as far as the money goes, it’s really pretty easy for me this year.”

This year, profit from the bee-related products will total about $500. In better conditions, Bee Club could have made closer to $2,500, but this is not an issue for Sellers.

“Bee Club is not business club,” Sellers said. “I’m not in it to make money; we’re in it to have bees and help people get local honey, local lip balm and just support a fun activity. I want to make enough money to buy jars and lip balm materials, things like that; so, profits are never a major concern for me. [It’s] just more about having fun with bees.”

Next year, Sellers’s classroom will be in the new building and he will have bees. He hopes that club members can meet in August after construction.

Sophomore Cat Sands is disappointed Bee Club has not been active this year, but she understands the rationale.

“While I do wish we could have had Bee Club this year, it is also really important to stay safe and socially distant, so I understand why we didn’t,” Sands said. “I am really not sure when the club will start up again, but when it does I definitely want to go.”