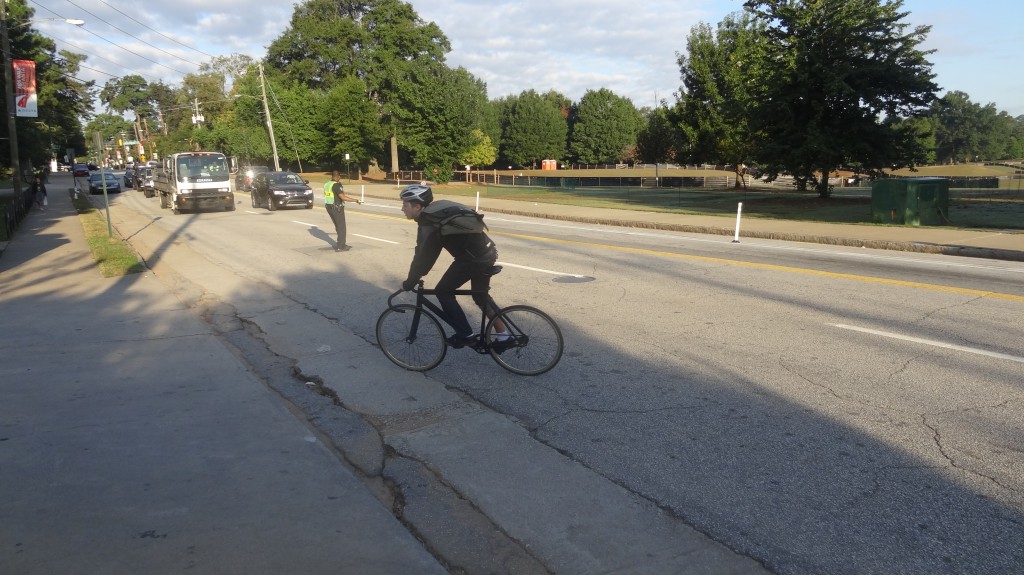 Each morning when he bikes to school on 10th Street, sophomore Conor Downey hopes that he doesn’t get hit by a car. He waits until a car is turning and sneaks across just behind it in order to enter the school. One morning,however, Downey didn’t make it.

While attempting to turn into Grady, Downey was hit by a passing car. Downey’s back tire was hit and bent beyond repair and he skidded out of control into the Grady student lot.

Even though no serious injuries were inflicted upon Downey, this accident may have been avoided if the City of Atlanta had not created the bike lane of 10th Street. The addition of this specialized bike lane has created gridlock and compromised the safety of students trying to bike or walk into the school entrance each day.

“I definitely think that the addition of the bike lane creates a bad environment for both bikers and car riders, mainly because of the dangers merging in and out of the bike lane, and trying to cross into Grady,” Downey said.

Given the volume of pedestrian traffic on 10th Street without a crosswalk, signage or traffic signals, some concerned parents fear another accident is imminent and that the next pedestrian hit might not be as lucky as Downey.

“I think [the safety of bikers] is a serious issue that we need to address,” Grady parent Jodi Mansbach said. “As you know, people arrive at Grady in a number of ways: bus, car, bike and walking. We need to make sure everyone arrives, and leaves, safely.”

Mansbach is working closely with the Atlanta Bicycle Coalition on this project to determine how to best serve cyclists who will be coming and going on the cycle track.

“As you know, we are very concerned about the potential for serious accidents given the challenging conditions that already exist on the new cycle track,” Mansbach said.

“As a parent, I am concerned about biking and walking safety around the school,” Schmitz said. “Right now, Grady students have no official crosswalk coming out of the Grady entrance on 10th, and many don’t walk all the way to Monroe or to the Piedmont Park entrance to cross at a light.”

On the morning of Aug. 29, Nancy Habif brought together a group of these concerned parents to meet with the cycle track city planner, Josh Mello, with the purpose of observing the traffic patterns around Grady. Based on what they saw at 8:15 that morning, the City of Atlanta Department of Planning is now working on a Phase II of the cycle track improvements, which could possibly include a refuge island for pedestrians, a crosswalk with lights in front of Grady, and the creation of a turn-only lane in the middle of 10th Street.

Along with these plans for the future, the ABC also wants to educate Grady students and the broader community on how to use the new cycle track. Mansbach stressed that all parties—pedestrians, cyclists, and drivers—must learn to coexist on the roads.

“I think we are at a critical moment in Atlanta’s development of a city where we all need to learn how to make this work,” Mansbach said. “It’s going to take some time to get used to.”

Josh Mello, along with the ABC, proposes that a pedestrian path be put into place across 10th Street. It is a work in progress, but Mello plans to meet again in the future with other city planners to work on this issue and discuss other solutions.

“Getting into the parking lot is probably the most dangerous part of my commute,” sophomore Bailey Kish said. “I don’t think there is a perfect solution without making it harder for everyone to get to school.”

Jett Marks, Grady parent and co-chair of the ABC’s marketing and outreach committee couldn’t agree more. He is eager to get involved in this initiative and will be helping to organize the upcoming Grady cycle safety campaign.

“This effort is exactly the sort of thing we’re trying to encourage—neighborhood involvement in making cycling safer and more attractive—all in support of the mayor’s goal to make Atlanta a top 10 cycling city by 2016,” Marks said.

Alex Wan, city councilman for Grady’s district, is also advocating on the school’s behalf. Janet Kishbaugh, another Grady parent on the safety committee, is pleased to announce Wan had a productive meeting on Oct. 1 with Mello on the proposed design for Grady’s 10th Street entrance.

“The city is planning to incorporate all the pieces we talked about into their plan,” Kishbaugh said. “This is great news.”

Leslie Caceda, the program manager for the ABC, believes the safety of the city’s residents and visitors should always be prioritized over how quickly cars can get through the city.