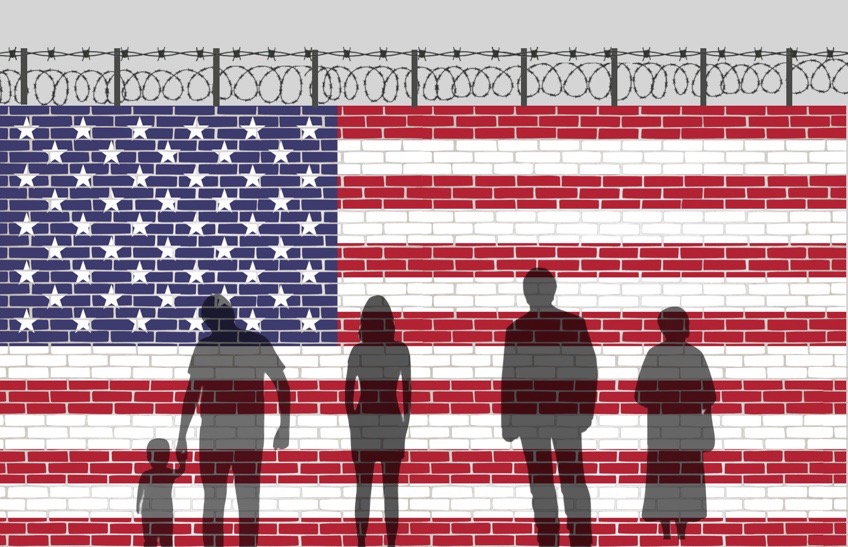 The path to American citizenship is often tough and certain individuals and groups may be excluded entirely (Original image courtesy of Skypixel via Dreamstime).

A 17-year-old girl from Iran, a teacher from Venezuela, a Mercer University student from Egypt, an immigration and criminal defense attorney from Colombia —all drawn to America with the prospect of opportunity.

However, in the United States, a country that markets itself as the promised land for immigrants, citizenship remains anything but straightforward.

Seven years ago, junior Shaya Moghim-Larestani immigrated to the U.S. from Iran. She is still not a U.S citizen and is unsure when or if she will obtain citizenship.

“Right now, we’re still living here under my mom’s work visa,” Moghim-Larestain said. “We had a court hearing for the green card application two years ago when I was in ninth grade. We’ve just basically been waiting to hear from them.”

Moghim-Larestani is not alone in her experience. According to the Cato Institute, an all time high of 1.2 million green card requests in 2020 resulted in severe backlogs and lengthy stand-by periods.

The long wait has caused Moghim-Larestani to question her identity.

“I just kind of feel stuck,” Moghim-Larestani said. “I’ve gotten used to it. Two or three years ago, I was kind of confused on how to feel about either being an Iranian citizen or American citizen. I’m not even sure if I can go by American-Iranian, or just Iranian at this point. It’s a bit of an identity crisis.”

“I grew up in Egypt; so, I’m very tied to there,” Attia said. “I’m happy to be a U.S. citizen, too, but I’m still pretty tied with my heritage. It feels great because now I can vote and do a bunch of things. I can vote and participate in political things; so, maybe it’s just accessibility.”

For Attia, the primary draw of citizenship was the benefits it provides for immigrants living in the United States, such as more accessibility to their home countries and easier international travel.

However, because flexible travel is a benefit to being a citizen, non-citizens, like Moghim-Larestani and her family, are prevented from returning home.

“I haven’t seen my family and my grandparents in seven years; so, that’s annoying,” Moghim-Larestani said.

Another benefit for naturalized citizens is the ability to vote in United States elections. Although Attia was not old enough to vote during the 2020 election, he says he will vote in the future and thinks citizenship should be made more available so that others can also participate.

“It took six years until we [Attia’s family] got to; so, I definitely think it should take a little less time,” Attia said. “It’s just very useful to have. It allows you to vote and voting helps determine your life here.”

HELP ON THE JOURNEY

Spanish teacher Aquiles Loero is from Venezuela and became an American citizen this past summer. He is trying to make citizenship process easier for other immigrants. Before the Covid-19 pandemic began, Loero spent his weekends teaching citizenship and naturalization classes at the Latin American Association of Atlanta.

“I was there teaching languages; I do Spanish and ESL [English as a Second Language] as well, for the newcomers,” Loero said. “I remember that I went to the office, and they were talking about the citizenship classes at that moment, and it just happened. They asked me if I wanted to teach them.”

Teaching classes at the Latin American Association helped Loero master the information he needed in order to successfully complete his own naturalization process.

“Teaching the classes was at the beginning a challenge,” Loero said. “I had to absorb so much new information, but it definitely pushed me to learn what I needed to learn.”

One of Loero’s responsibilities is teaching immigrants how to file Form N-400, the form used to apply for United States citizenship through the naturalization process.

“The form, it’s all about you, everything related to your personal life, your marriage, children,” Loero said. “There are hundreds of questions and information you have to fill out.”

The second step of the naturalization process is an interview which covers the information on the form. Before the interview, immigrants take ESL classes, many of which are taught by Loero.

“I had a student about two years ago who was asked what her spouse’s name is, which she already filled out on the form,” Loero said. “She didn’t understand the word ‘spouse,’ so she couldn’t answer the question. She didn’t pass just because of a lack of English knowledge. The interview was over in less than five minutes.”

“Typically, people take very basic private classes where they learn everything they need to know for the civics test,” Loero said. “The Latin American Association wanted to give more background and context; so, we actually offer civic classes. It is important that the new citizens of this country are not just repeating something, without having any sense of what those questions and answers mean.”

While this process can help many become American citizens, it takes years and isn’t always accessible to everyone. Many non-citizens, especially undocumented immigrants, face significant difficulties while living in the United States.

When Lizeth Gomez was 7 years old, she moved from Colombia to the United States as an undocumented immigrant. She now works as a lawyer in immigration and criminal defense. She also teaches at Freedom University, a school in Atlanta that teaches undocumented students and helps them go to college.

“I grew up as an undocumented student myself here in Georgia,” Gomez said. “I had the opportunity to go to college and then I went to law school, and I’m a lawyer. I’m fighting not only to educate the new generation of undocumented students that are coming up behind me but to make a change in these laws.”

“Georgia is one of the worst states to be undocumented in,” Gomez said. “I’ve heard anecdotally, [of] many students who simply drop out, even though they’re very, very bright. They have great grades, and they would make excellent college students. They simply dropped out of high school because they don’t see a path to college for themselves.”

POLICIES OF THE PAST

Immigration policies in America have had a long and complicated history that has lasted through the administrations of many presidents. Though each administration brings new policies, the fundamental principles of citizenship and naturalization have stayed the same since the writing of the U.S. Constitution.

“The United States immigration laws originally come from English jurisprudence, [or legal theory],” said social studies teacher James Sullivan, who is a former attorney. “Those laws have been followed for a very long time and influenced citizenship throughout U.S. history.

“It is again this tortured history of trying to expand the idea of ‘We the People’ and the idea of citizenship to various people,” Sullivan said. “Yet, we discovered along the way the people we had left out from the citizenship rights promised by our Constitution.”

“The 14th amendment was extremely influential, and is the most important thing that has happened to citizenship in the U.S.,” Sullivan said. “The 14th Amendment states that anyone who is born in the United States is automatically a citizen.”

Recently, the 14th Amendment has been controversial in the United States government because of “anchor babies.”

“Anchor babies are the children of mothers who are non-citizens of the U.S. but come here to give birth to their babies,” Sullivan said. “Due to the 14th Amendment, these kids are citizens of the U.S., having been born here. I can’t imagine that this is a problem because there aren’t many people who choose that option when you think of the difficulties.”

Often, immigration has been used as a political tactic, such as President Donald Trump’s campaign promise to build a U.S.-Mexico border wall.

“Immigration is often pulled out as a boogeyman to scare white people towards voting whenever there is something changing in our country,” Sullivan said. “There is always a backlash along the lines of trying to restrict citizenship or restrict immigration.”

Over the past few years, despite an increase in the number of naturalized citizens, some believe the political climate makes it more difficult for people to come to the United States and become citizens.

However, Gomez believes the new administration could reverse some of these policies and change perceptions across the country.

“That previous administration was really terrible,” Gomez said. “Not only did it have concrete things, concrete policies and laws that made everything very difficult for our students, but the culture of xenophobia becomes internalized. And, you start to fear everything, and you start to question yourself. I think your self-esteem falls. But in this new administration, it’s kind of like having been dunked underwater and you’re finally able to breathe again.”

Despite the hardships, Gomez believes the future is bright for undocumented immigrants and those seeking citizenship in the United States, especially for students.

“Policies have been changing on a national scale and attitudes have been changing on a national scale,” Gomez said. “That’s not just because congresspeople woke up one day and decided to change their minds. It’s because community groups have been pressuring so long to make changes … I believe that this generation of undocumented students, when they get together and unite and they push, they’re going to change everything.”

Sullivan believes that over time, the United States will become more inclusive and equitable.

“As I start off in U.S.history every year, the course in U.S. history is really the story of how ‘We the People’ becomes a larger and larger group over time, more inclusive over time,” Sullivan said.