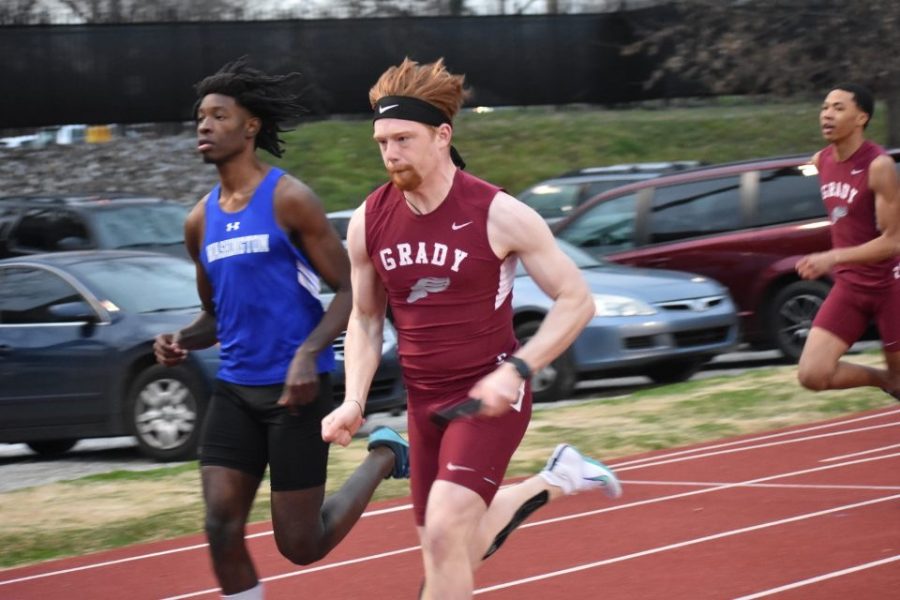 Senior Jackson Sexton strides to close out the last 100 in the 4x100 meter relay.

With winter sports ending and the spring months coming up, the boys track season has begun. Preseason rankings suggest the boys will have a strong season as it ranked No. 7 in Class 5A MileSplit preseason power rankings.

While the region meet is not until late April, the team, bearing a roster full of returning runners who can score, expects to do well.

“I expect us to go far,” senior sprinter and hurdler Jackson Sexton said. “We have a good amount of returning seniors, and some new incoming freshman coming in, too. We have a pretty good chance of making it past sectionals and into the state meet with the level of returning talent out here.”

Region 6-AAAAA is newly aligned this year and the team can expect competition from schools such as Chapel Hill, North Springs, Maynard Jackson, Villa Rica New Manchester and Lithia Springs.

“We are in a new region this year with Chapel Hill,” Ellerton said. “We anticipate Chapel Hill to be really really strong [based off the preseason ranking]. It seems like they have athletes across all events. We have strong athletes, but they will provide some competition for the region.”

The team will participate in meets throughout the season, but they remain primarily focused on the region meet and their end goal of qualifying as many runners as possible to compete at state.

“We are constantly playing a chess game and puzzle to put it together by the end,” Ellerton said. “We build up to this one meet, which is the region championship.” Since Covid-19 abruptly ended last year’s season by cutting it short after four meets, some athletes began training on their own.

“Me and my teammates have been doing a lot to get ready for this season, [including] staying in the weight room, keeping hydrated and eating right,” senior thrower Amari Little said. “[I’ve] been putting that work in on my off days, preparing.”

The team does have some concerns, however. The number of athletes is down, mainly stemming from Covid-19 related issues.

“Covid has affected us in that our kids aren’t at school,” Ellerton said. “The team’s numbers are down. We don’t have as many kids as we normally would have; typically going into the first meet, on our roster, we would have 25-30 kids. This year, I think we have 20 with 17 or so participating. Participation numbers are definitely off this year.”

Despite fewer new runners and a large roster, the team’s hopes remain.