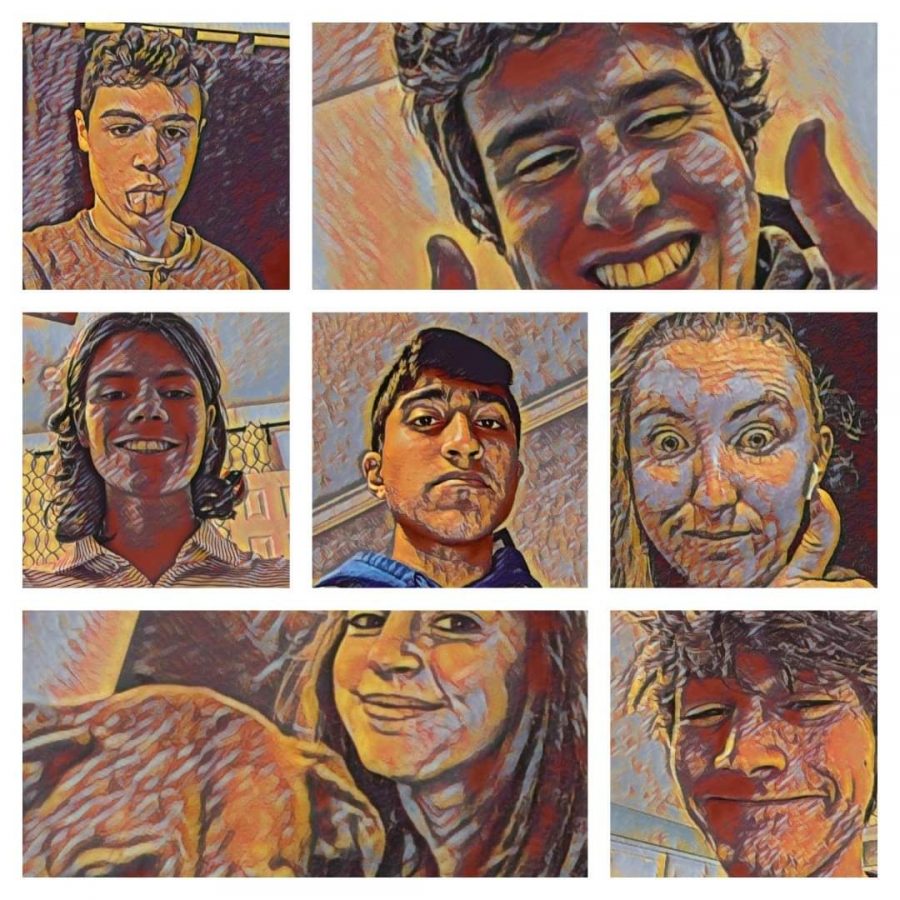 Members of the debate team pose for a photo. Sophomore Zach Spangler (bottom right) was the champion in Novice Public Forum debate along with his partner sophomore Jamie Marlowe.

Being a first-time debater can be scary, especially when the first time in competition is on Zoom. Despite challenges presented by a new competition format, the Grady Jesters Speech and Debate Team novices are making major contributions to the team.

On a team that is now the 12-time state champion, the pressure to do well in state competition for first and second year debaters was on.

“The returning varsity students on the team are amazing with helping the younger ones,” Herrera said. “I cannot say enough good things about them. They are approachable, they like laughing and encouraging the younger kids. In a nutshell, one of the reasons the novice members did so well at state  is because of our varsity members’ support.”

The Jesters sent fifteen novice members to the state competition on Feb. 5 and 6, and more than half placed in the top three in their event. Three novices were named state champions.

“This may be one of the best years we have had for first-year competitors at state, and it was virtual,” Herrera said. “They are great kids that are making it work. The nervous energy is very different in a virtual world because there is not the support like there is in a face to face world.”

Freshman Augie Werthman, a novice on the Public Forum (PF) Debate Team, was introduced to Grady debate by his sister, Class of 2019 alum Ellie Werthman, who also competed in PF. Augie and his debate partner Delia Schroeder were semi finalists at state, and he believes their and the team’s success was because of the sense of friendship on the team.

“The coaches and varsity members made it easy to adapt to a new team,” Werthman said. “Coach Mario [Herrera] especially was very fun to talk to and made learning about the topics very interesting, which encouraged me to keep coming back to practices. Also, having a reliable team I could always ask questions to and rely on for evidence and editing really benefited me.”

Varsity members play a significant role in getting novice members ready and confident for competition. Senior Elena Hubert, co-captain and a varsity member of PF, enjoyed helping first years and teaching them the in’s and out’s of PF debate.

“The role of the varsity members and mainly the captains on the team is to basically teach the novices how to debate,” Hubert said. “When they come in, they have little to no knowledge of what’s going on, so it’s really on us for them to succeed and do well. We spend the majority of the beginning of the season just teaching them about the basics of debate.”

When varsity members work with novices, it results in better competition performance and a growth in relationships between younger and older teammates. However, the recent transition to online competition due to the Covid-19 pandemic has changed these relationships.

“It’s a leap of faith for these novices,” Herrera said. “They look up to the varsity members to match what they’re doing and ask questions, and the varsity members can encourage them. That component is gone virtually. The way we are connecting is different.”

With all competitions and practices moving to virtual, many novices are having to adapt to the new circumstances of debate. For novice partners and the 2021 state champions in PF debate, sophomores Zach Spangler and Jamie Marlowe, these challenges added to the existing nervousness of competition.

“I think I speak for the both of us [Marlowe and Spangler] when I say that we were both nervous for pretty much all of the tournaments, whether or not they would have been on Zoom.” said Spangler.

Even with different conditions, the novice members this season succeeded beyond imaginable.

“The novices this year are really amazing,” Hubert said. “We went into this season not really thinking we were going to have any novices because it’s online. But these novices are very driven, and I can really tell they have a passion for debate.”