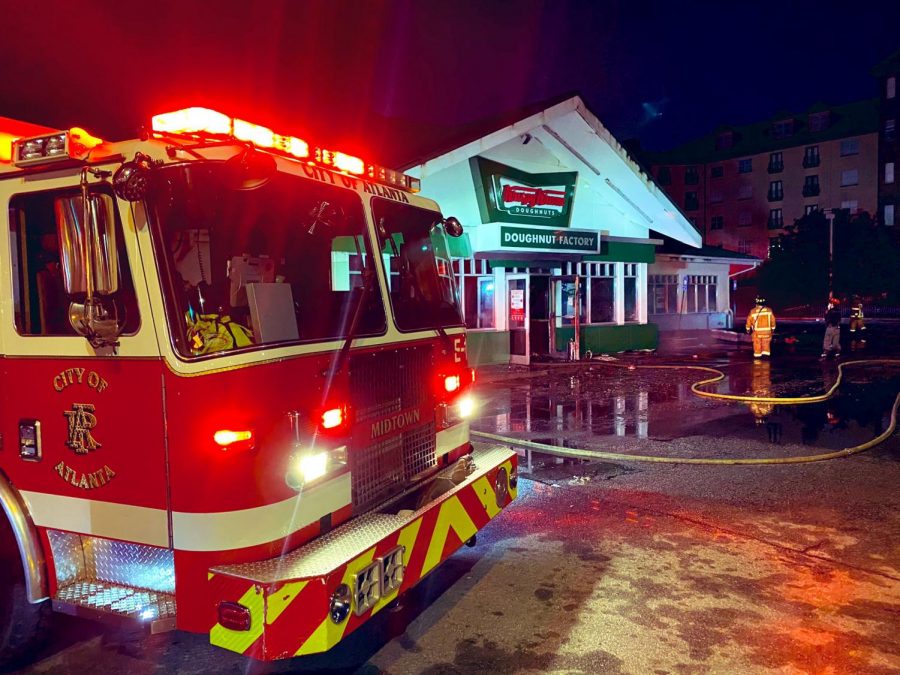 On Feb. 10, the historic Ponce De Leon Krispy Kreme was gutted by a fire, leaving behind a trail of grieving Atlantans. No one was injured in the fire, and investigators ruled the cause of the fire as arson.

Early in the morning on Wednesday Feb. 10, the Krispy Kreme shop was completely gutted by a fire, leaving behind a trail of grieving Atlantans. No one was injured in the fire. A little over a mile from Grady, the Ponce de Leon Krispy Kreme first opened in 1965 and quickly became an Atlanta landmark for its iconic vintage sign and its “hot n’ ready” glazed doughnuts.

While Krispy Kreme was an Atlanta staple, it was a Grady staple, too. English department chair Alex Wallace was a frequent visitor. He used to bring doughnuts for English team meetings and for students. When Wallace heard the news, he was “shocked” and “horrified.”

On Feb. 26, investigators ruled the cause of fire as arson, although there is currently no suspect. Krispy Kreme said on its official Instagram a reopening date is uncertain, but the location will open “as soon as possible.”

In the meantime, Wallace misses the location.

“I truly believe it was [a part of the Grady community], it really was,” Wallace said. “We as teachers would go there often, and I know [Principal] Dr. Bockman went there faithfully. She would have doughnuts for us every Friday in the office.”

“It’s just something that we have all kind of grown up around,” Hollingworth said. “Going to Krispy Kreme and Krispy Kreme being a staple, in a way, at events.”

Hollingworth has seen the first-hand effect that Krispy Kreme doughnuts have had on students. In his sophomore year, Hollingsworth helped run a fundraiser for the Mechanics Club selling doughnuts during lunch.

“We decided to get Krispy Kreme because it’s iconic,” Hollingworth said. “A lot of people love Krispy Kreme …we were just selling out instantly, each lunch period. It got to the point where we were like ‘Wow okay, we are onto something here.’”

“We were there the weekend before it burned down,” Strohl said. “I was really shocked because we were just there. It was just there, and then it was gone. I was like, ‘what the heck is happening?’”

Like Strohl, Mahony had Krispy Kreme doughnuts right before the fire destroyed the shop. Mahony had a tradition of visiting Krispy Kreme after the doctor’s appointments and to celebrate birthdays.

“I went to Krispy Kreme almost every time I had a doctor’s appointment,” Mahony said. “My siblings and I always wake up early and go there for our birthdays, regardless of whether we had school.”

While Strohl and Mahony will have to settle on Dunkin’ doughnuts or other Krispy Kreme locations for now, both await the location’s comeback.