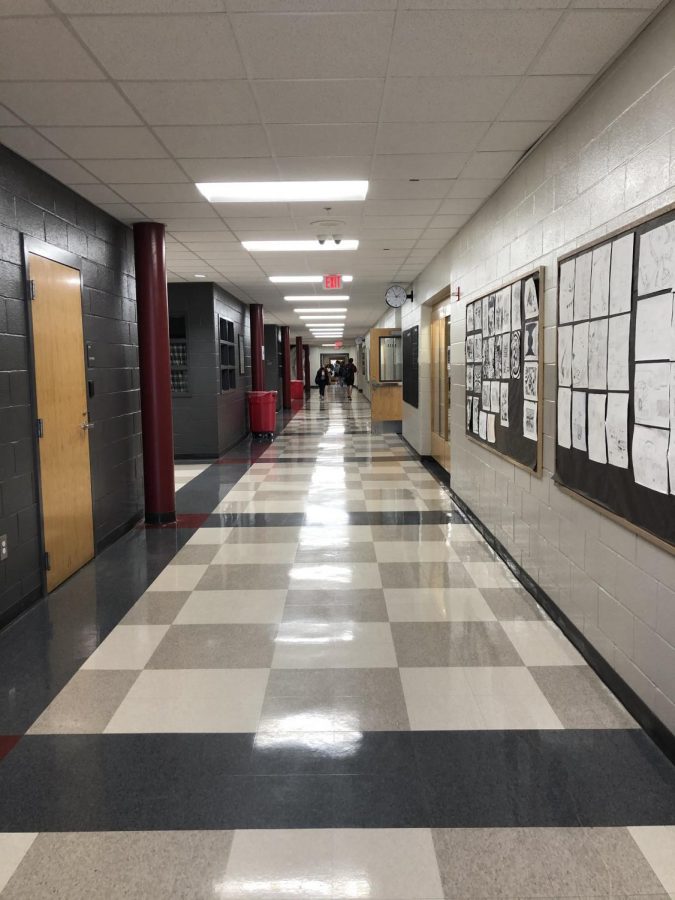 Students who opted to return to in-person learning entered the Grady building for the first time in almost 11 months, on Feb. 16. There they joined teachers who had been working in the building, preparing for students' return since early January.

For the past months, there has been much debate over whether or not APS should reopen its doors to students but as of Feb. 16, students who opted to return to in-person learning were back in the school building.

Some students, such as junior Laine Berg, who is currently taking multiple AP classes, returned because they felt taking classes in the building would help them perform better academically.

“I have three APs and French 4 this semester, so a pretty heavy class load,” Berg said. “I really wanted to be in-person so that I could be able to talk to a teacher if needed. It kind of also felt like not many people are going back, so it should be completely safe, so why not?”

Sophomore Tyler Hunter went back to school so his mom could go back to work. Hunter said he had some apprehension about returning, but that there have been academic benefits to returning. However, he along with other students who returned, commented that it was weird to re-enter the building for the first time since last March.

“The first time [I walked in], I was kind of awkward or nervous a little bit,” Hunter said. “It was the first time I’d seen a lot of people in a while.”

Sophomore Tristin Cruz-Tucker went back because he was “itching to get out of [his] room” but he didn’t expect to be learning simultaneously with his virtual peers on Zoom. He says while he knew there would be many fewer kids, being in person is “a lot different than last year.”

While a few teachers were approved to continue teleworking, most teachers had to return to the building. Math teacher Gina Robinson felt “a lot of anxiety” going into the first day of teaching students in person. However, she believes that the efforts of the other teachers, as well as the Grady administration, have made the school building a safe place to be.

“I felt safe yesterday (Feb. 16, her first day back),” Robinson said.  “The staff expressed a lot of concern to the administration about the lack of things provided as promised by the district, so the Grady High School administration, along with the PTSA and the Grady Foundation, really scrambled and worked hard to make sure that we had the appropriate PPE (Personal Protective Equipment) [and] that we had devices that would allow us to meet what the district mandates are for simultaneous learning.”

Math and Computer Science teacher Lakeisha Fuller agrees that the teachers have been provided with all the resources they need but thinks it will take a few more training sessions to learn how to use equipment such as document cameras and voice amplifiers.

Other students who returned also agree that the safety measures Grady has put in place, such as temperature checks, a mask mandate, plexiglass shields, digital hall passes and voluntary Covid-19 tests, have made the school building a safe environment.

Only about 15 percent of the student population returned to the building and many agree having fewer students returning to in-person learning has made the transition relatively smooth. For Fuller, she has only a few students, and her classroom is big enough to easily ensure that students are socially distant.

“I have a really large classroom so it’s easy for me to make sure that everybody is far enough away from each other,” Fuller said. “So I’m really comfortable. I don’t have any issues with it at all.”

Junior George Smalley said he also feels safe in class because of how few students are back and how spread apart they are.

“I only have three people in my class,” Smalley said. “Our classes are really small, and the rooms are kind of big and everyone is wearing masks. I’m like 30 feet apart from the closest person most of the time, so it feels fine.”

Some classes, such as those in the trailers are smaller in size, but Hunter says he still feels the students are adequately spread out.

“My biggest class would probably be my French class with 4 or 5 people,” Hunter said. “That’s probably the smallest, actual physical classroom and has the most people in it, but we are still spread out pretty well.”

For the freshmen who returned in-person, it was the first time many had stepped foot in the Grady building as Grady students. Robinson mostly works with freshmen and took special care to greet them by name and ensure that they felt comfortable in their new school.

“They looked like deer in headlights,” Robinson said. “That first day was like the first day all over again.”

The freshman class had the highest percentage of those who opted-in for face-to-face learning, and while other grades reported a maximum of three or four other students physically in their class, freshmen such as Sadie Smearman reported nine others in her class. Smearman said she is still getting used to the adjustment.

“I still don’t really know much of the building,” Smearman said. “I only know where my classrooms are. It’s different from how starting middle school was when there were more people to talk to you.”

Smearman originally decided to come back to school for more social interaction with her teachers and other students. However, she found her in-person opportunities for socializing limited.

“I’ve been able to talk to other people a little bit, but there’s definitely not a lot [of interaction],” Smearman said. “We’re all socially distanced, so it’s kind of hard to talk to people across the room.”

Hunter also finds the lack of socialization a major deviation from his previous years at Grady.

“I’m not [able to socialize] because I don’t have any classes with any of my friends,” Hunter said. “Usually, I would talk to them during lunch but now we have to stay in our third-period class… [so] part of that is taken away.”

Junior Madeline Moye feels that even the limited interaction has been a nice change from the relative isolation that came with learning virtually.

“Just interacting with the teachers in-person sort of adds a new aspect to it [that] I think I was missing out on [in] the past year that we’ve been virtual,” Moye said. “Even seeing those three to four kids in my class really helped…there’s just social-emotional interaction that you miss out on at home.”

Before returning, some students and staff were concerned about lunchtime, when students would take their masks off in their third-period class to eat. While many feel that this is safe due to the few people in their class, students also describe the hour-long period as “awkward” and “the weirdest part of my day.”

Teachers have had to adapt their teaching styles so they can still effectively teach both, what Robinson calls, the “zoomies” and the “roomies.” But students, such as Smalley, say there isn’t much difference in their learning.

Even though much is similar to the way students have been learning and teachers have been teaching for the past 11 months, going back to school has reminded students and teachers what they were missing.

“I realized I missed it,” Robinson said. “Just being around the energy of [students] and [their] enthusiasm, realizing that, if we weren’t there, you guys couldn’t do what you needed to do. It all kind of comes back, so even though I was very nervous and extremely anxious and scared, once the first student came in, it just started to feel more normal.”