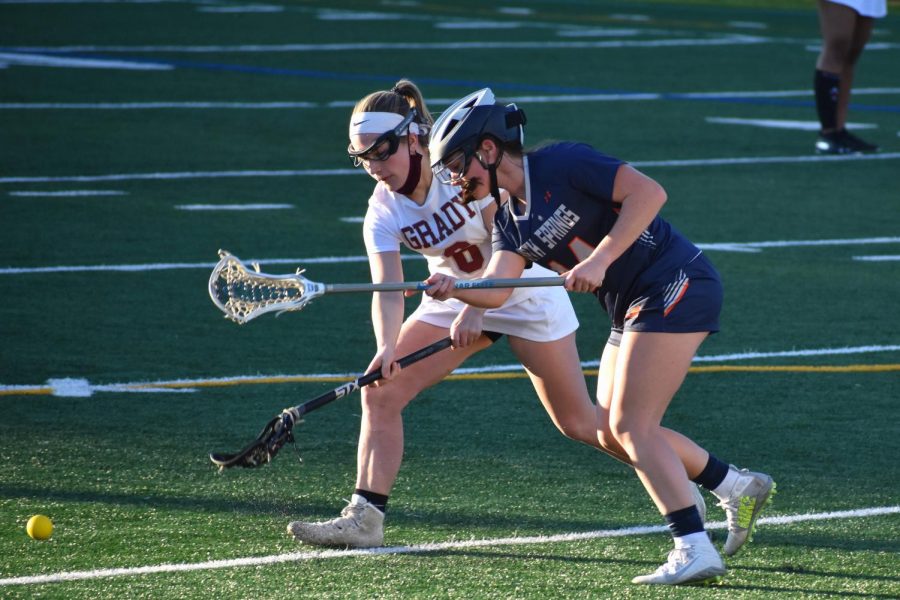 Adding some normalcy to student-athletes’ schedules, spring sports have started practicing and playing, including the girls lacrosse team.

After ending the 2020 season early with only four games under their belt and a 1-2-1 record, the girls are ready to get back to playing games.

“I’m excited to really just play some games,” senior Shawn Gillespy said. “We didn’t get a full season last year, and, obviously, junior year and senior year is when you’re most likely to get the most playing time, and it was really sucky that we ended with a brief season last year. I’m just excited to be playing games and scoring goals and all that type of stuff.”

“For our first game of the season, I thought that we did pretty well as a team,”  sophomore Mia Otaski said. “Over the course of our preseason, we bonded a lot, which I think helped in the chemistry of our team. It was a really tough loss, but we went out and gave it our all. We played a very hard team.”

The team wants to advance further in the playoffs than previous years, despite the challenges this year poses.

“I definitely think we have a really great chance of making the playoffs this year even though we have a smaller team,” head coach Lisa Liang said. “We have a great JV team;so, I’m really excited about creating that pipeline, creating stronger players so that we have a more full varsity team next year. I’m excited, and I think that we have a lot going on.”

Liang has coached at Grady for three seasons. Her main goal is to bring the team together.

“I think one of the big things we really work on is community and making sure that the girls feel a sense of commitment, not only to the team but to one another,” Liang said. “l am really for the belief that if the girls care and truly care and take compassion with one another;they play better as a team.”

The team is taking heavy precautions to slow the spread of Covid-19.

“Through every practice and game, we have decided as a team to all wear masks throughout the whole entire thing,” Gillespy said. “Pretty much the whole entire practice we wear our masks; we socially distance, all that type of stuff.”

The team has had to go through some changes from the previous years like fewer players.

“I definitely have had a lot of girls’ families who have made the decision that it wasn’t safe, or they were not comfortable playing,” Liang said. “Just from a player’s standpoint, not having as many girls has really affected it.

Despite the challenges, the team has become close, and the seniors are leading the way.

“Last year we only had two seniors, and this year we have four,” Gillespy said. “All the girls that are seniors have been playing all four years, and I feel like we are very dominant on the field compared to other years, which is really cool. Everyone’s already bonding and already getting close, and it doesn’t seem like there will be any problems, which is good.”