Boys basketball misses out on playoffs 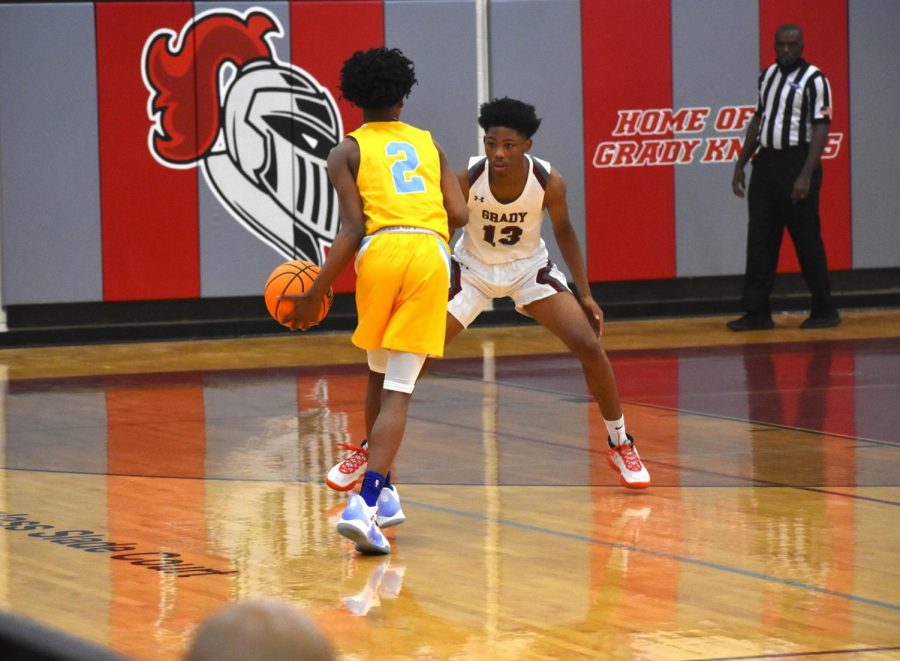 Junior Samari Barnwell defends a Mays High School guard in their scrimmage on Nov. 17. The Knights lost the scrimmage 48-47.

The varsity boys basketball team concluded the season 5-14 and 2-10 in Region 6-AAAAA.

This year the team has faced unprecedented challenges due to Covid-19.

“The season has been tough because games and practices are being canceled and games are hard to prepare for because of Covid-19,”  junior guard Khris Washington said before the season concluded.

“Hanson has really stepped up this season as our leader,”  Johnson said. “He’s playing well but doing all the right things to push our team in a positive direction, as well.”

Before the season ended, the Knights were hoping to win their last five games and qualify for the state playoffs. Five wins would have put the Knights in the top four seeds in the region, which did not have a tournament to determine playoff seeding.

“The last five games of the season we didn’t play that well enough to get wins,” junior Autrey Barnes said. “We still had room for improvement, but when we beat Maynard, we played together as a team, that was a highlight of the season, if we could’ve played like that, we could’ve won a few more games at the end.”

In order to make the state playoffs, the Knights needed to be in the top four seeds in their region, but the region tournament was canceled due to Covid concerns, which put the Knights in a hard spot.

“It’s frustrating because I felt like we had a chance to win some games in that tournament to get us to the state playoffs,” Barnes said.

“I’m nowhere near satisfied with our record, nor with how we have competed as a team,”  Scott said.  “[We] could’ve done a lot better, but this whole [season] was just unusual.”

“[There were]  no fans, and it [sucked] so bad because it’s senior night,” Scott said, “It’s not what I was looking towards, but I’m thankful for what it was, though.”

The Knights wanted to turn things around in the last five games and finish with at least a 9-10 record.

“I was disappointed and frustrated because we didn’t end on a good note; it’s not the season that we hoped for at all,” Barnes said. “I felt as though we really could have done better overall. Possibly made it to state, too.”