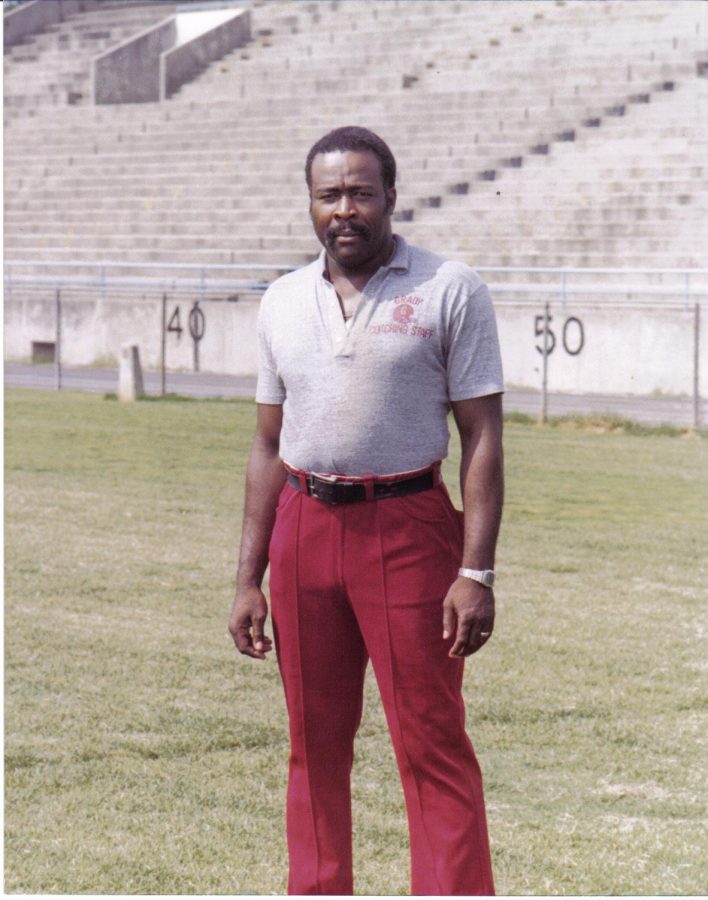 The APS Board voted to rename Grady Stadium to Eddie S. Henderson Stadium, after a previous Grady football coach, Archer principal and APS Athletic Director. Henderson was instrumental in making Grady and APS what they are today.

On Eddie S. Henderson’s first day coaching at Grady in 1970, his car was spray-painted and vandalized. But the next day, and every day for many years after that, he went back to work and loved it.

At its February meeting, the Atlanta school board unanimously approved changing the name of the Grady Stadium to Eddie S. Henderson Stadium.

Henderson was a graduate of Atlanta Public Schools, graduating from Archer High School and going on to become the head football coach and athletic director at Grady, assistant principal at Carver High School, principal at his alma mater, Archer, and APS’s Athletic Director. Henderson was also the first African American in Georgia to be certified as an athletic director. He passed in 2001.

The field at Grady Stadium was named after Henderson in 2012. But, after the board changed the name of Grady High School in December, Board Chair Jason Esteves appointed a committee to recommend a new name for the stadium as well.

“We just decided that based on all that he has done for the Grady community … he embodies everything that the Midtown (Grady) High School, as well as the Midtown community cluster, represents,” Jasper Jewell, the current APS athletic director and member of the renaming committee, said. “Everybody on the committee was on board.”

Henderson’s son, Eddie S. Henderson Jr., pushed for the field to be renamed after his father in 2012 and has been a major advocate for renaming the stadium in honor of his father as well.

“He worked, and he changed things,” Henderson Jr. said. “It wasn’t for him. His goal was to make, not just for Black kids, but for all the kids, the opportunity where kids can come to school and get a good education, but also expand their opportunities in life to education through sports.”

Henderson worked to ensure that there was equality between men’s and women’s sports in APS. For example, before Henderson, girls had to play softball on boys’ baseball fields, which caused safety concerns because softball doesn’t use a pitcher’s mound, and players would frequently trip over the mound during games. But, Henderson ensured that APS softball teams had their own fields with lights so they could continue to practice safely after dark. He also developed clinics for girls’ coaches, made sure girls’ sports teams had access to all the equipment they needed and introduced girls’ volleyball to the school system.

Fred Price worked as the APS Athletic Coordinator under Henderson and eventually replaced Henderson as APS Athletic Director. He, as well as others who knew Henderson, emphasized Henderson’s mission to unify the teams he coached as well as the schools under his jurisdiction across racial and socioeconomic divisions.

“One of the things he tried to do was bring about parity between the Atlanta Public Schools in the kind of upper echelon and those that were in the lower economic parts of Atlanta,” Price said.

Described as “an advocate for the student-athlete,” Henderson always put students first in athletics, as well as academics. The gate at the 10th Street entrance to Piedmont Park used to be open for cars to drive through, and Henderson would drive into the park during school hours to return kids who were skipping school. The day Piedmont Park locked the gates to cars, park officials gave Henderson a key.

“He loved the kids, and he represented them, and he fought for them,” Henderson Jr. said. “I know this because I rode with him many times, after hours, going into some dark places, looking for some students to save them, and I was afraid. But he didn’t care because if he saved one, he was good. But he was trying to save them all.”

Henderson was the second person Bobby Brewington met when he first arrived to coach at Grady in 1983. Brewington was the boys track coach, assistant basketball coach and part of Henderson’s football staff between 1983 and 1989.

“Coach Henderson, pretty much, for many of them, was a father figure, along with other coaches on the staff,” Brewington said.  “He would explain to us how sometimes as freshmen … they really didn’t know how to react to men because they hadn’t had a lot of men in their lives. He explained to us that we were role models and that we had to remember that as we went forward coaching every day.”

Bobby Dennis played football for Henderson from 1976 to 1980. He now runs a Facebook group with over 300 members representing Grady’s men’s sports teams from 1976 to the mid-1980s. Dennis says he still gets together with some of the guys he played high school football with, and they talk about how much of an inspiration Henderson was to all of them. Dennis, along with many others that played for Henderson, said Henderson was the “father figure” in their life, as well as in the lives of their teammates.

Dennis lived close enough to Grady that he could walk to and from school, but when he got injured during his junior year, he didn’t have a way home, so Henderson picked him up every morning and took him home every night after football practice. He said Henderson would help out his former players however he could, even after they went off to college.

“He was just a good person,” Dennis said. “First and foremost, he wanted to make sure we got that high school diploma back then … And if you did happen to go off to college and you needed help or whatever, he would provide whatever he could for you.”

Kenneth Booker was coached by Henderson when he played football at Grady between 1977 and 1981. Booker said Henderson’s “dedication and commitment” to the well-being of the students he coached, as well as the student body as a whole, was evident.

“He gave many lessons on being good human beings and taking care of your family,” Booker said. “That was Mr. Henderson.”

Ronnie Hull, who played football for Henderson from 1975 to 1979, said that as a coach, Henderson was a great mentor. Hull recounts a game where he made a bad play while subbing for Grady’s long snapper who had gotten hurt. He said instead of getting mad, Henderson was understanding.

“Most guys are dreading that long walk back to the sidelines, as I was, but when I got there he kind of made it all better,” Hull said.

Hull is now a football coach at Decatur High School, in part, he said, because of the impact Henderson had on him as a player.

W.T. Jackson played football for Henderson between 1979 and 1983. Henderson nicknamed Jackson “Baby Jack” because even though he was small, he “had heart” on and off the football field.

“He gave me that ‘no quit’ attitude,” Jackson said. “The one thing he said to me was that…the one thing I had was heart. That stuck with me…I think I’ve established myself in the world as a good hardworking person and I’m trying to pass that on to some of the young people that I know.”

Brewington says Henderson and then Principal Dr. Thomas Adger were a great team, and together they had a significant impact on Brewington’s life.

“They were role models for the rest of my career,” Brewington said. “I went on to coach many, many, many, many years and teach, and I was the athletic director myself. The basis of most everything I learned, I learned from [Dr.] Adger and coach Henderson … They taught me a lot, which is the foundation of my career.”

Douglas Slade, for whom the new gym’s basketball court is named after, worked alongside Henderson for 14 years and was Henderson’s successor as Grady’s athletic director. Slade says even after he became the athletic director, he could “always pick up the phone and he would give me some sound advice.”

“From the first day that I stepped foot on Grady’s campus, he has been a great mentor to me,” Slade said.

Paul Rivers played football for Henderson and was the quarterback in 1985. Even after he left Grady, he still relied on Henderson for advice.

“Once I went on to school, when I’d come back in town, I still would refer to my coach for any advice that I needed,” Rivers said. “I would come here, and he would direct me or give me advice on how he thought I should have handled a situation.”

Henderson valued discipline, of himself, other coaches and athletes. When Price became APS athletic director, he aimed to continue Henderson’s tradition of emphasizing discipline.

“He just tried to bring about parity between all the schools within the Atlanta Public Schools,” Price said. “He didn’t play favorites. He just insisted everybody be treated equally and fairly, coaches, as well kids.”

From the first day his athletes met him, they were told to answer him “yes, sir” and “no, sir.” But in addition to his discipline, Henderson was also known for his sense of humor. According to Brewington, during basketball games when the Grady girls’ team was beating the other team by double digits, Henderson would leave his post at the concession stand and would wave a white flag at the corner of the court.

“He would come to the corner of the court, right in front of concession stand by the wall, and he would pull out his handkerchief and raise [a] white flag, signaling to us, like, ‘Hey man, back off, don’t beat them so bad,’” Brewington said.  “It would be hilarious [while] we’re sitting there laughing on the bench. It was a good time; it was a fun time; it’s a time I’ll never forget and coach Henderson was definitely a part of it.”

While adjacent to Grady High School, what is now Henderson Stadium, is owned by APS and separate from the school. Slade emphasizes that that makes renaming the stadium after Henderson even more appropriate because his impact wasn’t limited to Grady and he says the board’s decision means Henderson’s name “will never die.”

“You can’t just focus on Grady High School,” Slade said. “Just think about what he did for the city. When he was the athletic director for [APS], he was an advocate for athletics and academics … Like I say, I could talk all day about him.”

Rivers says that for the people coached by Henderson, having the stadium renamed in his honor was the “best thing.”

“I knew that was the best thing for just all of the guys that went through Grady and played for coach Henderson,” Rivers said. “So that was just a great honor. We just felt like, if anyone deserved it, that he deserved it.”

Dennis believes Henderson is deserving of the recognition and that it “put tears through [his] body” when Henderson Jr. called and told him the stadium was renamed in Henderson’s memory.

“Coming out to some of the games, you go by the stadium, and you remember playing on that field and now they’re naming the [stadium] after someone that coached there, it means a lot,” Dennis said. “It really does.”

As the current APS Athletic Director, Jewell sees the legacy Henderson left in the department through his student-centered work and believes having the stadium named after him is significant.

The players who now play in Henderson Stadium never know Henderson personally, but Jackson says it’s important to recognize the history to show how strong Henderson was. Henderson Jr. said changing the stadium’s name marks an “exciting time” because it truly represents the community.

“I can’t verbalize [my initial reaction to the stadium being renamed],” Henderson Jr. said. “One feeling was gracious. And then, the other feeling was that it shouldn’t have been any other way. You owe him that. All that was, was a debt paid.”