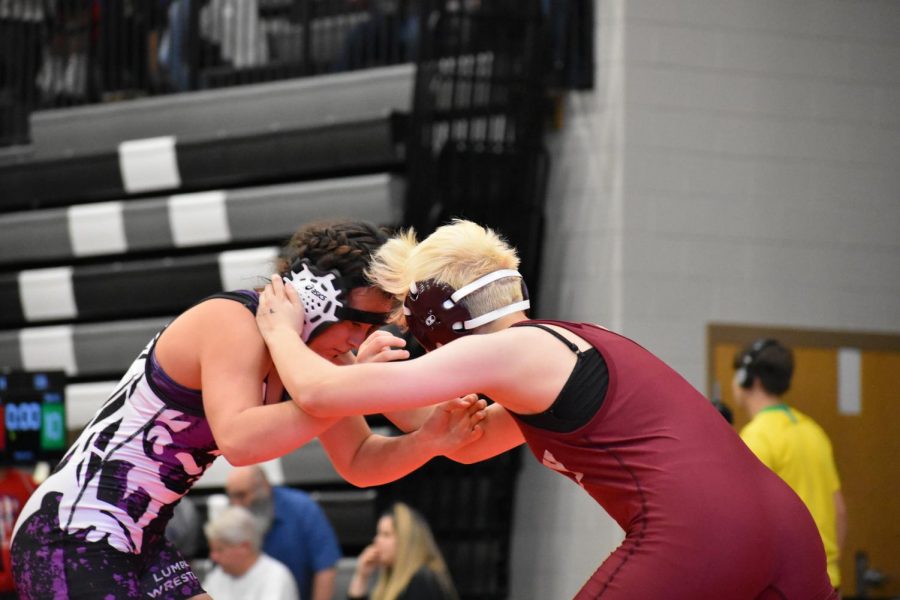 Senior Sophia Little wrestles against an opponent at the North Atlanta Warrior Classic back during the 2019-20 season.

After practice, most athletes are relieved and begin settling down. That does not apply to junior wrestling captain Jack Collins who piles on multiple layers of clothes and finishes with a two-mile run back to his house.

Wrestling challenges athletes and teaches them that — through hard work, determination and grit — anything is possible.

“Wrestling is just pushing yourself past what you think you can do,” Collins said. “You can be exhausted lying on the floor and just can’t even move, and you’re halfway through practice, and you just gotta get up and keep going. You’re pushing yourself until you’re uncomfortable, and when you’re uncomfortable, you work better; you learn better, and that’s where you get the most success.”

Tad Christian, who wrestled for Rossville Junior-Senior High School in Rossville, Kan., will go so far as to compare wrestling’s training to army boot camp.

“[Wrestling practice is] very similar because it’s about discipline; it’s about mind and body; it’s about making your body do something that you’re not used to doing,” Christian said. “You’ve gotta work on your strength, flexibility, conditioning. When wrestling practice started, you were moving, and you didn’t stop until you were done.”

Part of what makes wrestling so draining is the violent nature that accompanies the sport.

“The whole sport is just you against one other person,” Collins said. “There are no other interferences. It’s just you and another person in a ring, and getting into the mental state where you’re able to fight them and even just start to move on the mat is just so difficult.”

It is not always easy for athletes to adopt the aggressive, warrior mindset required for wrestling.

“I remember my first time wrestling in eighth grade,” Collins said. “I stepped on the mat and just had a miniature panic attack. It’s crazy just to be in a fight with someone even though it’s a very civil fight, of course.”

Collins believes that a wrestling match might be one of the toughest things that a high schooler can put themself through.

“A full six-minute standard match is the most exhausting thing I’ve ever done,” Collins said. “You feel like you can’t breathe, like air won’t enter your body. If you ever need to break a sweat, you’ll be drenched in sweat after a wrestling match. It’s only six minutes, but it is the most fulfilling six minutes you can do. I remember once after a match, I couldn’t breathe or talk really for, like, 30 minutes just because I was still catching my breath.”

What sets wrestling apart from other sports is not just the grueling practices and the tiring matches but also the commitment demanded off the mat, according to Collins.

“Wrestling is a lifestyle, and I don’t think you see that with any other sport,” Collins said. “Those few months when I’m on the team, my life is completely different. I’m super conscious about what I’m eating because wrestling is all based on weight, and as someone who’s had to diet a lot to move weight classes, you think about it day and night. It’s not just two hours a day; it’s 24/7. I’ve played a lot of sports, and I’ve never felt so affected by them to the point where I’ve made differences in my life.”

Wrestlers often rapidly transform their physiques to try to qualify for lighter weight classes and gain a competitive edge over who they see as weaker opponents.

Back in Christian’s day, the coaches had various forms of punishment to encourage the wrestlers to stay fit.

“If you were more than four pounds overweight, you would have to put plastics on that made you sweat a bunch, and then he had what they called a ‘meat grinder drill,’ and you had to wrestle the entire team, all the weight classes, from 98 pounds up to heavyweight, for 30 seconds,” Christian said. “It was brutal, but it was punishment for being overweight.”

Collins reflects on one of his most traumatic experiences with having to stay in shape for wrestling.

“I’ve dieted almost every year I’ve been on the team, but last year was definitely the most intense,” Collins said. “During the Christmas break, I took two weeks off, and when I came back, I was 10 pounds overweight; so, I basically had to wear a hoodie during practice so I would generate more sweat. I would run home from practice — it was a two-mile run back to my house — and I would do that in sweatpants, three layers of hoodies, beanie on, extra long socks. I think I wore a scarf at one point just to get that sweat going and really try to drop that weight.”

Likewise, when Christian wrestled, he went to extreme lengths to quickly cut significant amounts of weight.

“I absolutely starved myself,” Christian said. “When I was trying to make weight, I was eating celery and peanut butter and constantly abusing my body — not in a healthy way — to make sure I maintained weight.”

Wrestlers can drop ridiculous amounts of weight in record time by losing both water weight and real weight. As a physician, Stein figures that the latter is more harmful as it can be detrimental to wrestlers’ long-term health and development.

“Water weight is fine,” Stein said. “Your body is 60 percent water; so, getting dehydrated for a day or two right before a weigh-in is not a big deal. There’s also this other kind of cutting weight, which is just cutting back on your caloric intake, proteins and just kinda losing muscle mass. That is the medical definition of starvation. As a teenager, you’re really anabolic. You’re growing in height; you’re growing in width; your nervous tissue and brain tissue are maturing. You don’t want to deprive any of those tissues that are growing normally of either macronutrients or micronutrients. If you do, in theory, that could translate into growing to a shorter stature than you would otherwise, or it could mean that your brain tissue doesn’t mature like it would otherwise.”

Nevertheless, Collins thinks that wrestling has had a positive impact on his life.

“Honestly, it’s really improved my mental health,” Collins said. “The mat room is a small room; you’re only in there with your teammates, and it’s just really great. I’ve met my best friends in the wrestling room. It’s like having a normal team, of course, except that you’re so close with your teammates because of the nature of the sport. It’s just like being with your friends every day.”