My experience going back to school in-person 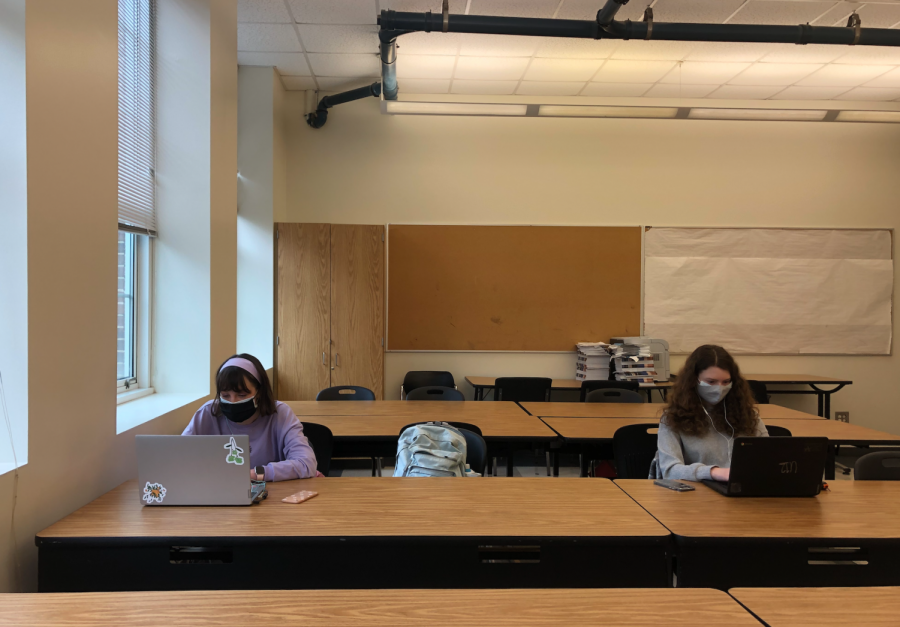 Students sit in the E200 Core Lab, where all the computers have been removed to allow for social distancing.

Three hundred forty days. That’s how much time has passed since I’ve been inside a classroom, seen my teachers in person and walked the halls of my school. On Feb. 16, that all changed, and I became one of the first Atlanta Public Schools high school students to return to in-person school.

I pulled into the 10th Street parking lot around 10:15 am. There were a couple of other parked cars, but I didn’t see any other students. It was a big contrast to what I was used to: parking somewhere on Vedado Way and running down the sidewalk towards the 8th Street entrance to make it to school in time.

As I walked up the stairs and into the courtyard, I saw a couple of lost-looking freshmen wandering around, wondering where to go. I made my way to the cafeteria doors, and they seemed to catch on to where to enter and trailed slowly behind me.

Once I was inside the cafeteria, I waited to get my temperature checked. When it was my turn, I walked up to the free-standing thermometer and stood on my tip-toes to get my forehead in line. I’m only 5’4, so it took a couple tries to get everything lined up, but eventually the light flashed green with my temperature: a healthy 97.8 degrees.

After my temperature check I went to go “check in,” which consisted of walking up to the school business manager, Mr. Barnes, telling him my last name and watching him check a square next to my name on the list of students returning to school.

After that was all taken care of, I made my way to my first period class and got a little turned around. Even though I’m a junior, it had been nine months since I was in the building. I walked down the E200 hallway until I noticed the class numbers were going up, not down, and I was going the wrong direction.

When I finally got to the right classroom, there was no one there to let me in. I knew that my teacher hadn’t returned to school for health reasons, but I was still expecting an open classroom. It took about five minutes for the hall monitors to realize something wasn’t right. Once they did, an energetic substitute showed up. Naturally, the students in my class did not match his enthusiasm.

First period was pretty much the same as it had been sitting at my desk at home (except this time with four other students). The desks were set up in a fan shape, with four in front of the room, and each row behind was a bit longer so that no desk was directly in front of another. The room I was in served as a space for two classes: my AP Language and Composition class and another class made up of two freshmen.

At the end of each class, an announcement blared over the intercom in place of a bell. Those at home couldn’t hear that announcement, so my teacher kept talking for three more minutes past the end of class. Normally, that wouldn’t be an issue, but because now I actually have to physically walk to my next class instead of just clicking on the Zoom link in my notes app, I was worried I would be late to my next period. I was about to come off mute to let my teacher know, but she ended the class just in time.

My second period class was in the C200 computer lab, where they removed the computers so there was plenty of room to spread out. My teacher welcomed me to her room with a huge smile on her face (not visible through the mask). We had a couple of technical issues, because there would be feedback whenever any of the in-person students spoke. But later on, we figured out that it stopped if our teacher went on mute or put in headphones.

All in-person students eat lunch in their third period class. The hour-long lunch break was nice until we got stuck figuring out how to use the newly-implemented virtual bathroom passes. They’re supposed to be used through an app, and students can go and request a pass on the site for whichever class they are in. The virtual passes are meant to ensure that only one person is in the bathroom at a time and are logged for contact tracing.

Even after watching many videos and spending a couple of minutes searching through the help links on the page, I was unsuccessful. Eventually, my teacher figured out how to issue me a pass through her side of the app, but that never showed up on my screen; I never figured out how to use it. Just like the feedback issue in my second period class, this is one of the little things that will still need to be ironed out over the next few days.

Fourth period was pretty much a repeat of my first period. My fourth-period teacher stayed at home for health reasons, and I ended up in the same room that I was in for first period with the same substitute. It was a pretty uneventful 50 minutes, until the announcement was made over the intercom at 3:25 signalling the end of the day when everyone got up to leave.

I was the last person to leave the room, even though I quickly threw my computer charger, AirPods and math notebook back into my bag. As I walked into the hallway, the substitute shut off the lights, told me to have a good day and shut the door behind me. I made my way across the hall and down to the steps outside the E200 hallway and watched as students slowly trickled out of the building. It looked like the complete opposite of our average dismissal. There were no unmoving students stuck in crowded hallways or large groups of people right outside the cafeteria doors. Instead, everyone walked briskly towards the parking lot, and no one stood around.

As I walked down steps, I was struck by how average my day felt. It didn’t feel like a big deal that I had just returned to school for the first time in almost a year. When I pulled into the parking lot that morning, I was nervous. I’d heard rumors that I would be the only person in all of my classes, that we would be punished for walking too close to someone in the hallway, that the bathroom doors would be locked. I found none of that to be true.

I was nervous about Covid-19 and what it would be like being inside for so long with other people. Once I settled into my first class, those nerves disappeared. We were all inside with no open windows or outdoor tent classes and took our masks off to eat lunch, but everyone was spread out and very conscious of our distance. I felt safe, and honestly, it felt like I’d just gone through a normal school day.