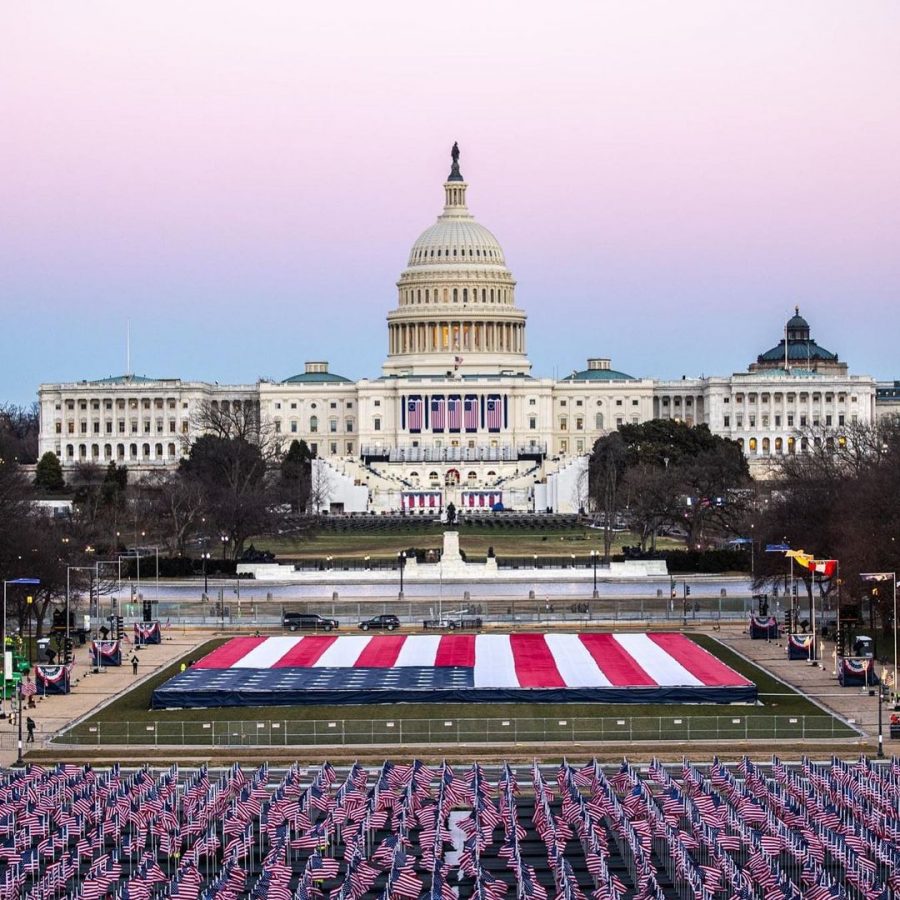 President Joe Biden was inaugurated on Jan. 20, 2021. Though the inauguration took place amid the coronavirus pandemic and security threats, it encouraged unity across the country.

After a contentious election season that divided the nation and increased partisanship, Joe Biden became the 46th President of the United States on Jan. 20, 2021.

Amid the coronavirus pandemic and potential security threats, President Biden and Vice President Kamala Harris both took their oaths of office in front of a small crowd of their families, other politicians, and guest performers. Although tensions are often high during presidential inaugurations, these events represent a keystone of the American democracy: the peaceful transition of power.

“What’s so remarkable about the American experiment is that this was… when our country began, an unheard-of thing: that someone who had power would willingly give it up,” Civics and U.S. History teacher James Sullivan said.

Maya Collins attended the inauguration of President Barack Obama, the first African American President, in 2008. At the time, she was a student at Benjamin E Mays High School, an APS school in southwest Atlanta.

Despite recent unrest in the nation, President Joe Biden’s inauguration showed the people that the American democratic process was still trustworthy. As Biden said in his speech, “At this hour my friends, democracy has prevailed.” Despite attempts to invalidate the election by Former President Donald Trump and some of his supporters, Biden’s inauguration reaffirmed the idea of the transition of power and leadership for many.

“With the exception of the 1860 and 1864 elections, this was the first time that that peaceful transition of power was potentially threatened,” Sullivan said. “[The inauguration] shows the American people and the world, with all the bumps, we have kept going.”

In response to the Capitol Riot that occurred on Jan. 6, just two weeks prior, this year’s inauguration intended to promote a message of unity among the turmoil. During the event, speakers repeatedly emphasized the importance of reaching across the aisle and working together on issues.

“I think that it was important that this inauguration was about unity,” English teacher and Public Forum debate coach Susan Ramsey said. “There seems to be a message, an invitation, to move forward united. There are so many people right now that are feeling betrayed, either by Trump, or by other people in the government, or by our electoral process.”

The ceremony was attended by leadership from both the Democratic and Republican parties including Former Vice President Pence and the majority and minority leaders of both chambers of Congress. Former President Trump was notably absent. His absence broke a long-standing custom of the outgoing president attending the inauguration of their successor, which Sullivan feels is an important part of the peaceful transition of power.

“[A president’s attendance] shows our country and it shows the world a peaceful transition of power,” Sullivan said. “We need to show that we are one nation; yes, with many different people in many different opinions and different political parties, but that the important thing is that the nation endures and the Constitution endures.”

The public was not allowed to attend the inauguration because of the coronavirus pandemic and security measures put in place after the events of Jan. 6. Instead, spectators tuned in virtually to view the event.

“I think that they did the best that they could have under the circumstances, but I think that it’s still very different than anybody would have wanted,” Collins said. “Part of the Inauguration was the public getting to celebrate who they selected and that was really muted yesterday.”

Others believe that the lack of a live audience actually improved the experience for people watching from home.

“There were points in the inauguration that I felt as though [the lack of people] improved the inauguration,” Ramsey said. “It made it feel more formal and the Capitol looked gorgeous because you were able to see so much of it. In other years, the number of people that are there sort of blocks out the beauty of the building.”

Although there was no public audience, the tradition of musical performances continued. Lady Gaga performed the National Anthem, Jennifer Lopez sang a mashup of “This Land is Your Land” and “America the Beautiful” and Garth Brooks sang “Amazing Grace”.

“I cried when I found out what J-Lo (Jennifer Lopez) was singing because it is such a protest song,” Ramsey said. “It was an anthem that he (Woody Guthrie) wrote for the American people to tell them why they needed to be proud of being an American…and then Garth Brooks was brilliant because we need to pull in the conservative, rural perspectives if we’re going to be unified.”

Although the inauguration looked different from previous years, it retained many of the ceremonial elements, proving consistency and unity during times of fear and division.