Leniency necessary for AP Exams: We’re still in a pandemic 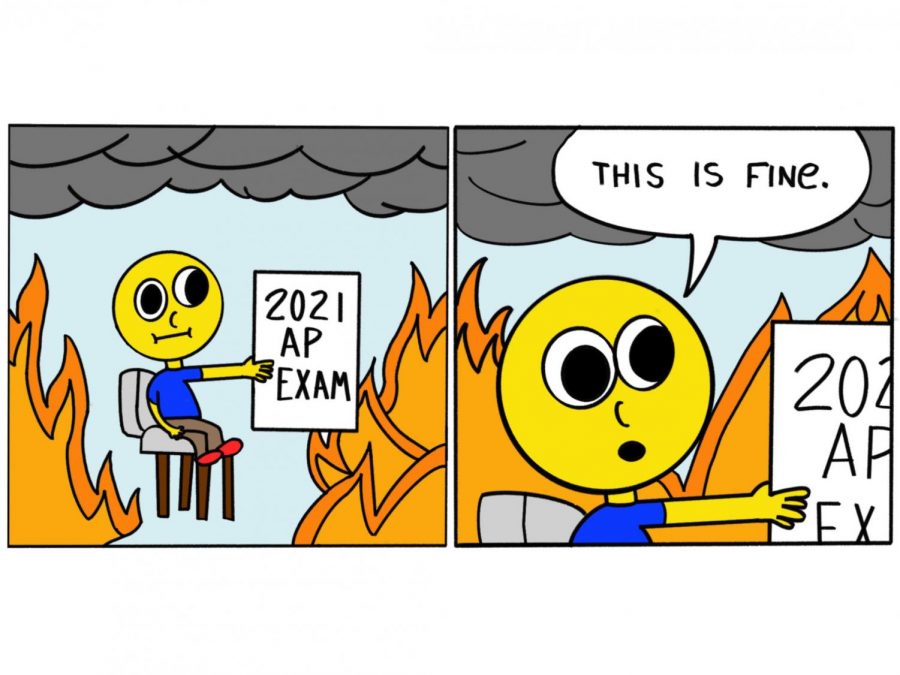 Collegeboard's determination to administer a full-length AP exam only heightens the anxiety and educational inequality of students nationwide. Original "This is fine" cartoon by KC Green.

While some have adjusted to living during a pandemic, for many students, parents and teachers, school during Covid-19 has been tumultuous and feels like it will never settle. Schools nationwide have been disrupted, and the stability that school used to provide for students has been stripped away.

To deny the impacts Covid-19 has had on schools is to ignore the millions of students struggling to gain access to technology, balance their home life with school and learn from a computer. School isn’t the same as it always is and the College Board needs to acknowledge that and adjust its tests accordingly.

Recently, the College Board has announced it will be offering full-length AP exams both in person and with an online contingency plan in case schools are still closed. Alongside this, will be additional backup testing dates with more information being released in February. While it’s kind of the College Board to offer additional materials and new testing dates, what would be kinder of is if it acknowledge the impact of the pandemic on students nationwide from different ethnic, socio-economic and geographic backgrounds. Instead of treating students to a three-hour AP exam with masks, the College Board should treat students with dignity and give them the leniency they were afforded the previous year (which included a shortened test, administered virtually).

While most schools nationwide were virtual during the early stages of the pandemic in March 2020, fall of 2020 brought different challenges, most of which manifested themselves in exacerbating student inequality. Schools nationwide have volleyed between completely virtual, in-person and hybrid classes, all of which have impacted students and have drastically impaired or created obstacles with their ability to learn.

A study by Columbia University found that although disadvantaged students are more likely to be in attendance at online school, less effective teaching skills and routines disrupt their ability to learn and will widen the achievement gap. This study goes on to further confirm that students of color were more likely to be enrolled at fully virtual schools than white students, potentially compromising aspects of their education.

The New York Times found  that the pandemic has resulted in deepening hardship and difficulties at home. The Times determined that job losses have disproportionately hit minorities and low-paid workers; child hunger is on the rise and poverty rates are growing. So, it’s understandable how some students may be more focused on feeding their siblings and trying to lighten their parents’ burdens than concentrating on studying for their three-hour long AP exam. Students who are carrying more weight at home should not have to sacrifice doing well on their exams because of outside factors that make it harder for them to succeed.

The New York Times also emphasized the Digital Divide, which has been a culprit of  massive changes and added struggles of remote learning. The Times found that rural districts of color were often left behind in the global race to get access to Chromebooks and that districts with deeper pockets often won the battle for access to technology. Not only are students likely struggling to manage their tumultuous home lifestyle and potential parental financial difficulties, but now some students don’t have access to the necessities of remote learning, compromising their access to the full AP curriculum.

While the College Board has uploaded review videos and offered extra testing dates, it’s not enough. The College Board needs to realize that like 2020, 2021 isn’t a normal year. People are still struggling, students are still juggling their lives and trying to figure out what’s going on, and people are still dying. Just because some have gotten used to life during the pandemic and have the resources to adjust normally doesn’t mean everyone else does. And to not acknowledge that is beyond foolish.

The College Board’s refusal to acknowledge the systemic inequalities in education that have existed long before the first case of coronavirus and have been exacerbated due to the pandemic is indicative of what they care about, both as an institution of fostering education and a corporation. And let’s make it clear, it’s not the students they care about.  The College Board needs to implement a shortened exam that can be distributed to all students, especially those who are disadvantaged nationwide. The pandemic has already been a rude awakening to the inequalities in the education system: the College Board shouldn’t add to them.