The Hawks struggle with injuries after hot start 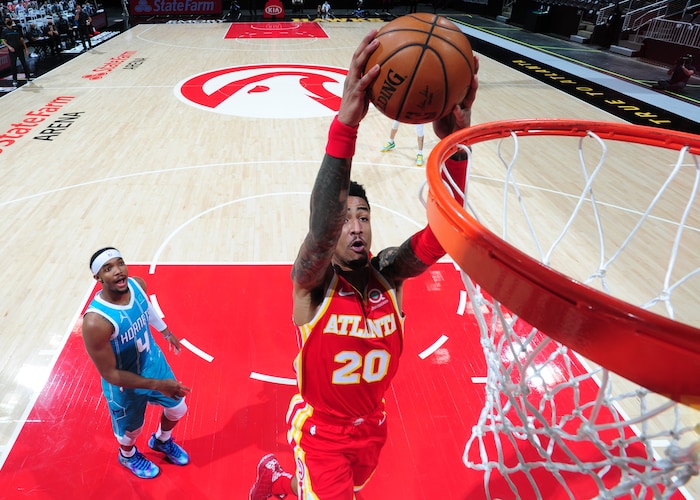 John Collin finishes with a slam in a loss against the Hornets on Jan. 9 Credit: nba.com

The Atlanta Hawks are coming off a year with very little success, but after several moves made in this year’s offseason, the team looks primed for a playoff push.

With a record of 20-47 in the shortened 2019-20 season, the team’s outlook looked quite grim, but with a combination of the development of young players and the signing of veteran players, the Hawks have a newfound buzz surrounding their organization.

Though they started the season hot with a record of 4-1, the 7-7 team has suffered through a slump that has come as a result of several injuries to key players.

The first move that the Hawks made to add players to their roster for a playoff push was center Clint Capela. Though the trade was made in 2019-20 season, Capela did not play a single game for them during that time, making his debut for the Hawks in the 2020-21 season. Capela has had a massive impact on the Hawks, averaging 14.2 points and 14.2 rebounds. In the past three games, Capela has averaged 25.0 points and 18.7 rebounds. The Hawks are 2-1 in those three games.

The first signing the Hawks made during free agency was 32-year-old Italian power forward Danilo Gallinari, who averaged 18.7 points and 5.2 rebounds last year with the Oklahoma City Thunder.

There were several questions around what this move meant for power forward John Collins, who didn’t reach an agreement with upper management regarding a  contract extension, but both general manager Travis Schlenk and Gallinari have made it clear that Gallinari would be coming off the bench. This move provides an important source of scoring when Young and Collins are resting.

Gallinari was unfortunately sidelined with an ankle injury, and is doubtful for the Jan. 22 game against the Timberwolves.

The second move the Hawks’ front office made was the acquisition of 26-year-old Chicago Bulls guard Kris Dunn, who averaged 7.3 points, 3.6 rebounds, 3.4 assists, and 2.0 steals.

Dunn was largely brought in for his defense, which is beneficial alongside Young, who in his first two years in the NBA has largely been looked at as a defensively weak player. Dunn will likely guard an on ball player, giving Young the ability to guard a less skilled player on the defensive side of the ball, making the team’s defense stronger.

Dunn has yet to play a single game for the Hawks, as he is dealing with a knee injury. He recently was allowed to remove his walking boot, and able to apply weight to his ankle in practices, but his return to games is seemingly weeks away.

Rondo brings a veteran leadership to the team, and can also serve as a mentor to Young, as the former all-star guard has heaps of playoff experience, enough to garner the nickname, “Playoff Rondo.” Rondo, who had a somewhat inconsequential regular season with Lakers last year, seemed to come alive in the playoffs, with a 2-point increase in points per game, and more than a 1-point increase in both assists and rebounds per game.

Along with an increase in offensive stats, Rondo effectively locked down several of the talented guards he faced, including players like Jamal Murray and Damian Lillard. If the Hawks make good on their promise of reaching the playoffs, “Playoff Rondo” could be very important to their ability to win games.

Rondo has only played 6 games for the Hawks so far, as he looks to strengthen his knee.

Though the Hawks made a few other acquisitions, including trading for Tony Snell and signing Solomon Hill, the last major player the Hawks struck a deal with was Sacramento Kings shooting guard Bogdan Bogdanovic.

Bogdanovic, who averaged 15.1 points last year, will has started for the Hawks and has provided a valuable source of scoring to take away attention from his backcourt partner Young. Bogdanovic is a talented scorer who is effective from the 3-point line as well as in the pick and roll. There were several teams in play for Bogdanovic, but the Hawks were able to sign him after the Kings declined to match the Hawks’ offer.

Bogdanovic suffered an avulsion fracture in a recent game against the Hornets, and will likely be out for a number of weeks.

The Hawks grabbed a valuable young center in the draft in Onyeka Okongwu, who adds more defensive help to the team, and has potential to eventually be a starting caliber center in the NBA before long. Okongwu has played a two games, as he was recovering from a foot injury to start the season.

Though many fans were excited going into the season, it has been a rough patch for the Hawks injurywise, with six of their seven main offseason acquisitions being sidelined. They will need better luck and good health for likely the rest of the season in order to be in playoff contention.