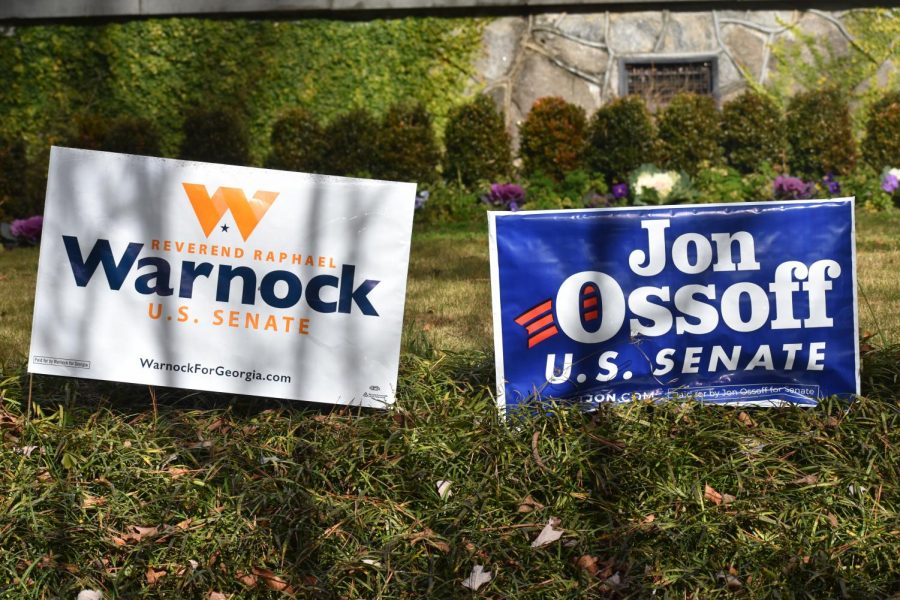 After winning two crucial Senate runoffs in Georgia on Jan. 5, the Democratic Party has secured 50 seats in the U.S. Senate, a majority after Jan. 20 with Vice-President Elect Kamala Harris acting as a tie-breaking vote. These two victories ensure a Democratic trifecta in the House, Senate and White House for the first two years of the Biden administration.

In the special Senate election, Democrat Rev. Raphael Warnock defeated Republican Senator Kelly Loeffler 50.60 percent to 49.4 percent, a victory outside of the .5 margin required for a recount. Loeffler was appointed to fill the seat in January 2020 by Gov. Brian Kemp after Senator Johnny Isakson resigned due to health concerns. Loeffler remains a Senator until Senator-Elect Warnock is sworn in, due to the nature of her term.

Warnock addressed supporters virtually at 12:23 a.m. on election night after a tabulation of DeKalb County votes put him ahead of  Loeffler. Media outlets called the race for Warnock just hours later.

During his address, Warnock echoed the sentiment of President-Elect Joe Biden, pledging to work for all Georgians, regardless of who they voted for. Additionally, Warnock, the first African-American senator from Georgia and the first African-American Democratic senator from a Southern state,  acknowledged the historical nature of his victory, citing his strong ties to the state through his parents and his own relationship with the “American Dream.”

“The other day, because this is America, the 82-year-old hands that used to pick somebody else’s cotton picked her youngest son to be a United States senator,” Warnock said. “Tonight, we proved with hope, hard work and the people by our side, anything is possible.”

Despite projections of Warnock’s victory, Loeffler has yet to concede. Speaking to supporters on election night, the senator remained vigilant, confidently stating that: “This is a game of inches. We’re going to win this election.”

After falling behind Warnock’s margin, Ossoff currently holds a 24,859 vote lead over Perdue, a margin expected to increase as outstanding ballots remain in the Democratic strongholds of Metro Atlanta.

Ossoff declared victory in a Livestream at 8:00 a.m. this morning, thanking supporters and citing his priorities for his Senate term.

Like Sen. Loeffler, Perdue has yet to concede. After Ossoff reclaimed a narrow lead early Wednesday morning, the Perdue campaign released a statement, pledging to “exhaust every available resource and every available legal resource to ensure that all legally cast ballots are properly counted. We believe in the end, Senator Perdue will be victorious.”

Both races received national attention following the Nov. 3 general election. According to an analysis of mid-December FEC Filings by the Center for Responsive Politics, over $900 million  had been spent between the two races. The Ossoff-Perdue contest became the most expensive Senate race in history, and the Warnock-Loeffler race followed close behind.

Running as an unofficial joint ticket, Democrats campaigned heavily on Covid economic relief and ending gridlock in Washington. On the other side, the GOP focused on painting their opponents as “radical liberals” and preserving a Republican majority in the Senate to offer a check on a Biden-Harris administration.

Throughout the runoff, the Republican messaging around checking a Biden presidency was continuously undermined by President Donald Trump’s repeated false claims of election fraud and a stolen election in Georgia.

On Jan. 3, just days before voters went to the polls, the Washington Post released a recorded phone call between Trump and Georgia Secretary of State Brad Raffensperger on which Trump urged Raffensperger to “find 11,780 votes,” which would amount to one more than Biden’s certified lead of 11,779. Following the release of the recording, both Loeffler and Perdue followed several other congressional republicans in announcing that they would object to the certification of the Electoral College on today.

Many see the president’s continuous disinformation about Georgia’s electoral process as a key reason why turnout yesterday was lower in Republican strongholds.

“When you say your vote doesn’t count … then you spark a civil war within a GOP that needed to be united in a tough fight like this in a state that has been trending … in the other direction for years now,” Georgia Elections Implementation Manager Gabriel Sterling said.

While turnout remained lower than the general election (roughly 88 percent of the Nov. 3 election), the nature of the turnout, proportionally lower in rural, Republican counties and proportionally higher in urban, Democratic counties, allowed both Ossoff and Warnock to claim victory.

Within the electorate, Democrats primarily relied on increased black and youth turnout to sustain the momentum gained after Biden’s narrow victory in the presidential contest. Part of this boost in turnout came because of the runoff’s timeline. Over 23,000 Georgians turned 18 between the general election and runoff, a demographic group that overwhelmingly favored Warnock and Ossoff.

In large part, the Democratic tickets shifted its message to encourage turnout among these key demographic groups, focusing heavily on issues from student debt forgiveness, climate change, criminal justice reform and even cannabis decriminalization as a means to boost turnout.

Royce Mann, the co-founder of the organization Students for Ossoff and Warnock, notes that victories in these races can shape the priorities of the U.S. Senate.

“If young people come out in record numbers and flip the Senate, we are going to assert ourselves as a really important voting block, especially young voters and voters of color,” Mann said.