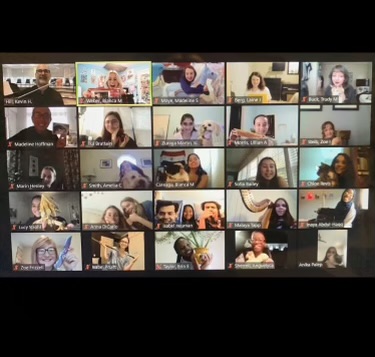 Wintertime always means Grady’s music concerts. Hosted in the Murray auditorium, these concerts are a staple for musicians, music directors, and an audience. This winter, Grady’s music department is still putting on a show, but this year’s concerts come with a unique online twist.

According to Atlanta Public Schools Fine and Performing Arts Coordinator, Dr. Sara Womack, as of Nov. 16, APS music and theater programs have had the option to rehearse in-person in groups of 10 or less. However, Grady’s music programs have not rehearsed in-person since the 2019-2020 school year due to worries concerning COVID.

“It’s definitely been hard not being able to attend in-person orchestra or chorus since those were some of my favorite things to do,” Junior orchestra and chorus member Jonathan Fuller said. “But to look on the bright side, this has given me a lot of time to do some individual practice which is always appreciated.”

However, while in-person rehearsals are permitted, APS in-person concerts are not. Like other virtual music concerts, Grady’s chorus has to sync students’ individual video submissions together to create a performance.

“We normally record on a video platform called FlipGrid,” Junior and Grady chorus member Audrey Isakov said. “Those submissions are then edited into one video which is then uploaded to YouTube. This is where our final concert performances can be viewed.”

The final product of the chorus concert can be viewed next week, on YouTube.

Grady’s orchestra class has been using the online platform Upbeat to submit concert videos. Upbeat allows individual students to submit videos for their teacher to then listen to each musician’s part, and finally sync the students’ videos.

“The actual working and tinkering with the different parts is actually fun,” orchestra director Krissi Davis said. “But it’s very time consuming and it can be stressful. If you miss something, trying to go back and find where the misstep is can be a little bit time-consuming.”

Each of the students’ video submissions have to blend perfectly, so putting together a virtual performance can be difficult.

“I would say virtual concerts are a lot harder to put together than in-person concerts because there’s no way to listen to each other while we make our recordings, which is a huge part of orchestra in general,” Fuller said. “So that really has an impact on the final product.”

Davis says she has learned that not all pieces are virtual-performance friendly. If at any point even one student was to get off rhythmically while recording their concert submission video, that would throw off the entire final compilation of the class’s videos. Because of rhythm complications, a couple of songs were taken off the orchestra’s winter concert lineup, including a song called Chimera.

“Say measures one through 10 were perfect, then you got off at measure number 11,” Davis said. “Measure 11 now affects the rest of the piece. That’s basically what happened with Chimera. Pre-COVID, Chimera was definitely within [their] ability level. [They] definitely would have performed that with no issues in a regular situation.”

Despite these challenges, the show will go on with the other songs the orchestra has prepared. Their concert will be live-streamed through YouTube on Thursday, Dec. 17.

“Despite my conflicting feelings about it, I still felt that it was important that we showed what we worked on this semester,” Davis said. “That was ultimately what led my decision to go forward with a virtual performance.”

While Grady’s orchestra and chorus are ending the semester with winter concerts, Grady’s band program has decided to wait until they can perform in-person. Band director Artis Staton thinks the input of the work, perfection and stress that go into putting together a concert outweigh the benefits of creating a virtual band concert.

“When you’re playing on that recording, it’s a lot of pressure,” Staton said. “You want everything perfect. I know when I’m submitting camera recordings for my kids, rather than just playing live to them, I do 20-30 takes to get something perfect so they can listen to me. That’s unnecessary for me as a teacher to put my kids through that, just to say ‘look at what we did.’”

It’s much easier to be critical of a concert through a recording due to the fact that each student is in the spotlight the whole time, and mistakes can be easily recognized.

“When I’m listening to these virtual concerts, I’m super critical because it’s a recording,” Staton said. “When I’m sitting there listening to a live performance, I’m just enjoying the evening,”

Staton believes that rather than stressing about a performance, students should use online schooling as practice time to strengthen themselves as individual musicians.

“When we play as a group, it’s a lot of ensemble skills,” Staton said. “What I learned in the first few weeks was that we were really missing a good amount of individual skills.”

Staton wants others to know that his decision to not hold a band concert does not reflect his opinions of other teachers’ decisions to put on virtual concerts.

“I don’t want anyone to think that I think anything less of my colleagues for [having online performances],” Staton said. “I actually thought long and hard about it, as somebody who likes to go above and beyond and I really like to show off my kids. I felt that it was going to be more for a show and tell, rather than educational value.”

Whether they are performing virtual concerts or not, Grady’s chorus, orchestra, and band all agree that an in-person concert is preferable. However, given the circumstances, that is simply not possible at this moment.

“Obviously the virtual concerts aren’t as fulfilling as in-person concerts, but it’s definitely the best we can do right now,” Fuller said. “I’m looking forward to when orchestras can meet in person again.”