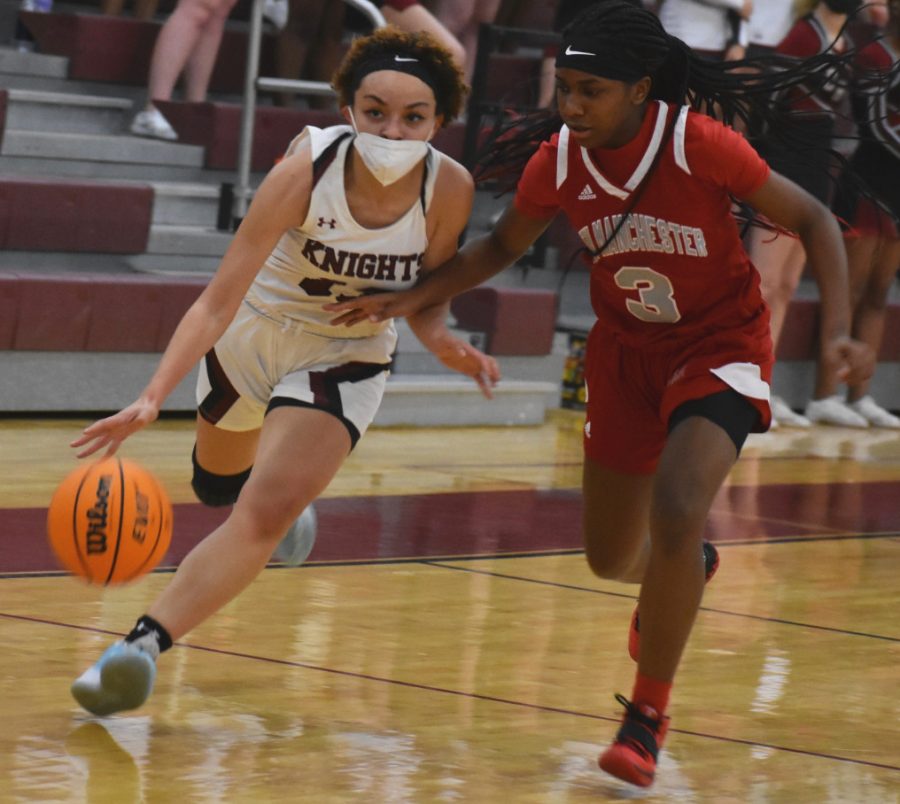 Senior Trinity Lewis drives the ball to the basket in a home game against New Manchester on Dec. 11.

In their eighth matchup of the season, the Knights fell to No. 10-ranked New Manchester 66-35 in a one-sided game on Dec. 11.

“I expected them to do a lot better because, in practice, they’ve executed extremely well; their intensity has allowed them to play at a high level,” head girls basketball coach Dana Smith said.

Going into the region game, the Knights had a set of objectives that they hoped to accomplish.

“We always have three goals, which are to be consistent, to communicate with one another, and to have confidence,” Smith said.

“The energy was OK in the first half,” Smith said. “We always have a slow start, which is why we rely on our bench. Not having the fans contributes to this. At the end of the day, we just couldn’t get any shots to fall, which was tough in the first half.”

To start the second half, junior Lillian Wilson made a huge block, which hyped up the Knights’ bench. Unfortunately, the Knights failed to capitalize as they turned the ball over shortly after. The Jaguars were on top 58-26 at the end of the third quarter.

Similar to the rest of the game, the fourth quarter was lopsided in favor of the Jaguars.

The Knights’ next game is against North Atlanta on Dec. 12. Moving forward, the team hopes to develop its own tempo, along with more chemistry and confidence.

“Some of the things that we agreed to work on include being able to trust each other, play our own game, communicate on defense, and control the pace of the game,” Smith said. “We don’t ever want to come out and play the opponent’s game. We want to play at our own pace and our own speed.”