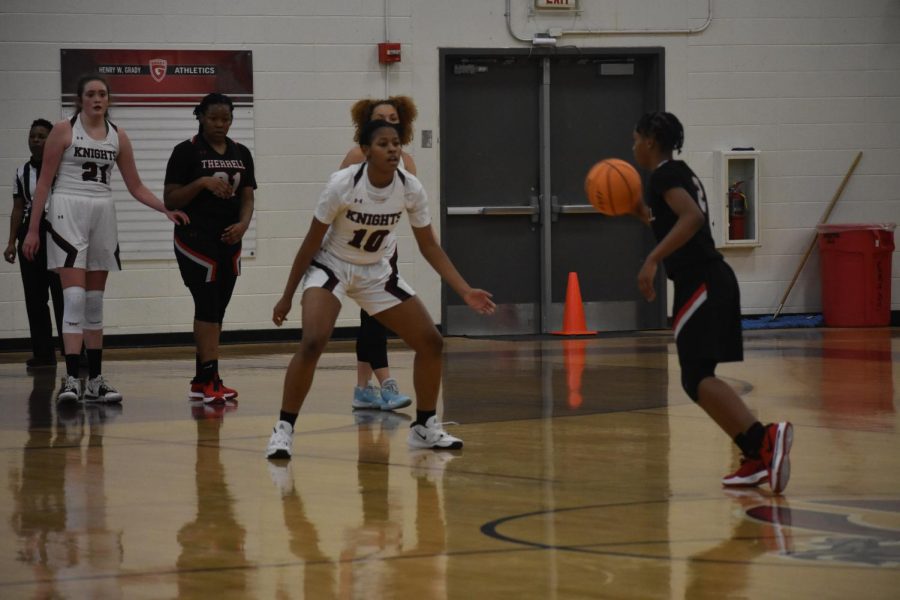 Grady's defense prepares as Therrell's point guard dribbles the ball up the court.

Led by new head coach Dana Smith, the girls basketball team is off to a 1-2 start and will face off against Mundy’s Mill High School today.

The team, coming off a 56-10 win over Therrell over the Thanksgiving break, is responding to Smith’s early season leadership.

“I’ve liked the season a lot so far,” junior captain Jade Lewis said. “[Coach Smith] is a lot more organized, which is something we are really not accustomed to. All of our equipment was here in the first week of practice; we have notebooks to jot plays and things down in, and it’s just been really organized and really good for the team.”

Having reached the playoffs last season and found success with a 16-12 record, Smith wants to develop her student-athletes as people and teammates, in addition to their abilities on the court.

“I know one thing that I’ve instilled is relationship value,” Smith said. “I’ve been reaching out to the kids and finding out who they are on a personal level, and finding out what their strengths are, what their weaknesses are, and what their goals are, so I can gain a better understanding of how I can support them, on and off the court.”

The coach’s support and attention has helped foster a team of players who trust one another and are looking out for one another during games, practices and off the court.

“We’ve been working on our chemistry, and moving the ball around, too,” Lewis said.  “So, we’re not just standing around there on the court. I expect the team to have better chemistry this year, and I expect us to move a lot better because of that.”

That trust also plays into better communication and energy on the team which has become evident during practices thus far.

The team has had no issues related to Covid-19, thus far.

“Playing sports during this time does come with some risk; so, we are doing everything we can within the season to make it as safe as possible,” athletic director Patrick Johnson said. “Our coaches, athletes and families have been doing a great job since the summer working together to make everything as safe as possible, and so far, we haven’t had any major problems.”

The pandemic has caused no disruptions in the team’s preparation.

With the pandemic, a new coach and five freshmen on the roster, the team could have been in a rebuild. Smith sees a season of possibilities.

“I’m just really excited for the opportunity to be able to come in and develop a system that will help younger players and returners to come together and play hard,” Smith said. “We’ve got a new staff, and I trust them to carry out the same core values that I live by, and to develop these athletes so they can get strong together, and compete together, and fight through this season.”