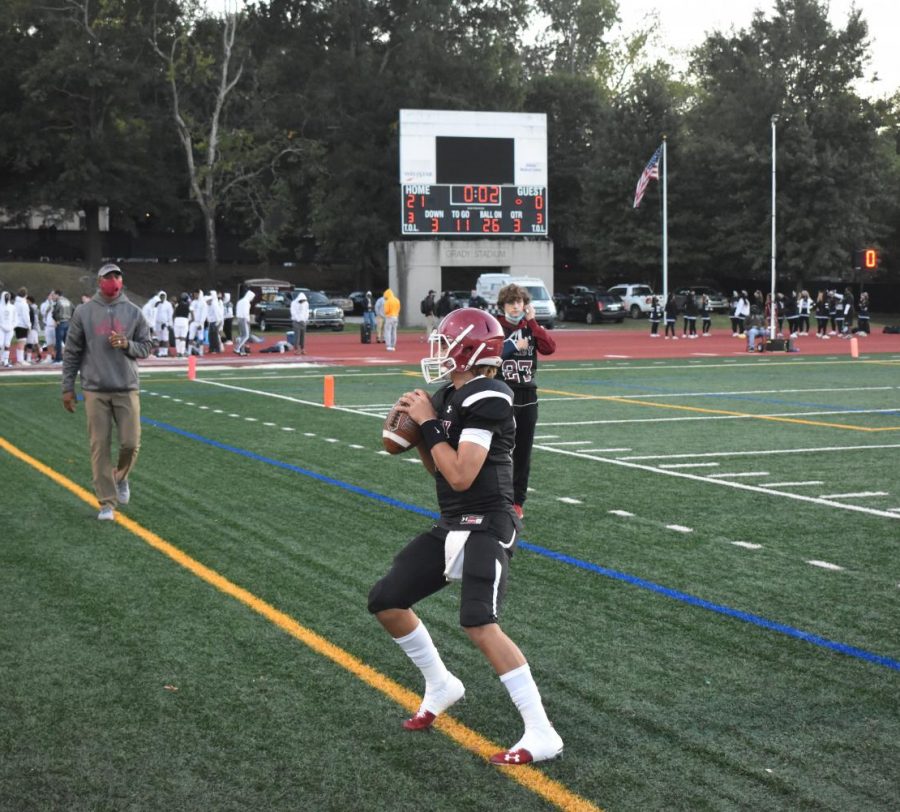 Sophomore quarterback Forrest Lietz warms up at half time of a game against North Springs on Oct. 16

Sophomore Forrest Lietz was thrown into the hardest position in football: the starting quarterback.

Lietz finished the season with 6 touchdowns, 438 passing yards and a 34.2 completion percentage.

Though he had played baseball in the past, Lietz had never played football up until this year. He was named the starter two games into the season.

“I decided I wanted to play just to give it a try and see how I did, and obviously now I’m the starter,” Lietz said.

Lietz getting the call up, however, was not in the original plan for the season.

“His first week of practice I thought to myself, ‘This kid probably won’t be able to touch the field until next year,’ because he was just that behind as far as his mechanics and having never actually played football,” offensive coordinator Shannon Williams said. “Forrest, as a student of the game with a really great work ethic, was able to bring himself up to speed and be able to perform in a high school varsity football game at a high level.”

He got the call up after a 30-6 loss to Mays by head coach Kevin Clark, who wanted Lietz starting against rival North Atlanta.

“Coach told me the Monday before the game,” Lietz said. “I had a feeling it was going to happen because of all the injuries we had, but it was still surprising to hear my name called as the starter.”

The Knights lost the game 35-0, but it was a learning experience,and as the starter, Lietz built chemistry with the players around him.

“The players began to put trust in Forrest even before our first win, and in the weeks leading up to that, I was starting to notice that his teammates were cheering for him more,” Williams said. “I started to see Forrest starting to lead the guys as far as running sprints after practice and being a guy that I felt like the team needed as a leader.”

As a younger member of the team, Lietz looked to upperclassmen to guide him.

“As a sophomore, I’m sort of in a weird position, but I’ve done my best to be a leader, and I’m definitely still trying to learn through others on the team,” Lietz said.

One of the people who mentored Lietz is senior receiver Marvin Wiley, one of the Knights’ three captains.

“I’ve been able to show Forrest how to lead effectively by telling him to take charge and to be in control of our offense,” Wiley said.

Lietz formed important relationships with coaches and players that helped his success.

“I didn’t know any of the coaches going into the season, but I definitely trust them because they know a lot more than me, and I feel like they trust me, as well, because of the fact that they chose me at quarterback, which obviously means a lot,” Lietz said.

As a result of his trust in Lietz, Williams added new schmes to the play book to open up the offense.

“With Forrest, we’ve been able to add the deep ball, and he’s sort of started to specialize in that,” Williams said. “Forrest has four touchdowns of 50 yards or more;so, that’s worked well for us.”

Wiley and teammates bonded with their quarterback as the season developed.

“Our relationship has grown a lot; I look at Forrest like a little brother,” Wiley said. “We talk on and off the football field all the time.”

One of the major turning points in the season was the Knights first win against regional rival North Springs 38-0. Lietz had his best game of the season, throwing for two 50-plus yard touchdowns.

“We were supposed to beat North Springs, but it definitely felt really good to win our first game and kind of fired everyone up to win more games and more games within our region,” Lietz said.

While the Knights finished 1-9 and the season didn’t garner as many wins as coaches and players wanted, the future holds promise.

“I feel like Forrest will have successful seasons for the rest of his time in high school,” Wiley said. “He’s a true student of the game and tries to understand the game mentally every chance he gets.”