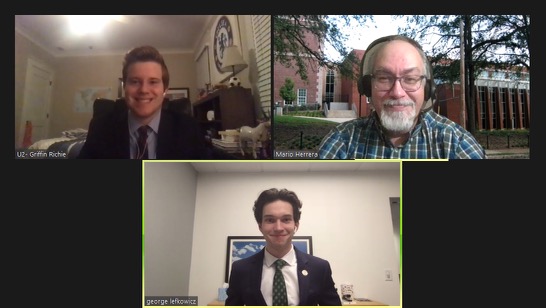 Seniors Griffin Richie (top left) and George Lefkowicz (bottom center) heard about the China Chengdu-U.S. Sister Cities Youth Debate Challenge from Grady Jesters debate coach Mario Herrera (top right). Richie and Lefkowicz represented one out of 14 teams from the United States. The pair made it to the quarterfinals and placed fifth.

While most students were taking a much needed Thanksgiving break, seniors Griffin Richie and George Lefkowicz competed in the China Chengdu-U.S. Sister Cities Youth Debate Challenge.

Richie and Lefkowicz advanced to the quarterfinals, placing 5th overall in the tournament. The tournament spanned two weekends: Nov. 20 to 21 and Nov. 27 to 28. Twenty eight teams of high school students, 14 based in Chengdu, China and 14 from the U.S., competed. The pair represented Grady and the Grady Jesters Speech and Debate Team. The tournament, started in 2016, is meant to promote Sino-American relations and educational development.

“American teams would travel to China, but this year, because of Covid, they made the tournament virtual,” Richie said. “So, we log in around seven at night, and for them [Chengdu debaters], it’s early in the morning.”

Because of the Covid-19 pandemic, the international debate operated differently than in the past. Students debated each other from halfway across the world, which presented timing challenges.

“The biggest logistical concern was just the time zone difference,” Lefkowicz said. “I think it’s either a 12 or an 11-hour time change from here. They were competing at eight in the morning when we were competing at nine at night or eight at night, so that was kind of a pain.”

Aside from time differences, Richie and Lefkowicz had to take into account cultural differences.

“We definitely had to think about more specifically, like, ‘Okay, how do we want to address the different norms they have?’” Richie said. “And also, ‘What arguments do you think would be socially and culturally acceptable?’”

These cross cultural differences were a factor to consider, but they weren’t a key driver in determining the outcome of the debate. American and Chinese debaters debated the same topic for each round: the pros and cons of Artificial Intelligence. Along with a common topic, everyone spoke a common language.

“The competition is entirely in English because debate is viewed as an American activity,” Richie said. “So, all of their debate events are in English, and their English is impeccable. That hasn’t been really an issue.”

To represent Grady and the U.S. in a field of tough competition, Richie and Lefkowicz found that their skills of speech and debate complimented each other well.

Teacher and Grady Jesters debate coach Mario Herrera nominated Richie and Lefkowicz based on their previous record and achievements in speech and debate and to provide them with a unique learning opportunity.

“George and Griffin are experiencing the exchange of ideas and voices in a unique manner, finding other students who enjoy speech and debate as much as they do in China,” Herrera said. “That experience will resonate with the team for years to come. When so much is focused on difference, it is gratifying to find common ground with those from other countries. Jesters will see through example that a search for truth through debate can be a satisfying international experience.”

This experience may not have been possible if not for the pandemic and the shift of virtual communication around the world.

“If there was no pandemic in a hypothetical world and they held the same tournament, I see it as a likely scenario that we didn’t even know that tournament existed,” Lefkowicz said. “This is the first time any team or competitor from Grady speech or debate has competed in an international setting.”

Richie, Lefkowicz and Herrera hope that this is an experience that more Grady Jesters will be able to share in the future.

“I think it’s a great way for Grady to expand our reputation as not only a national school but also an international school,” Richie said. “I’m really excited that we had this opportunity, and I hope we’re able to do this tournament in years to come, especially if it’s in person.”