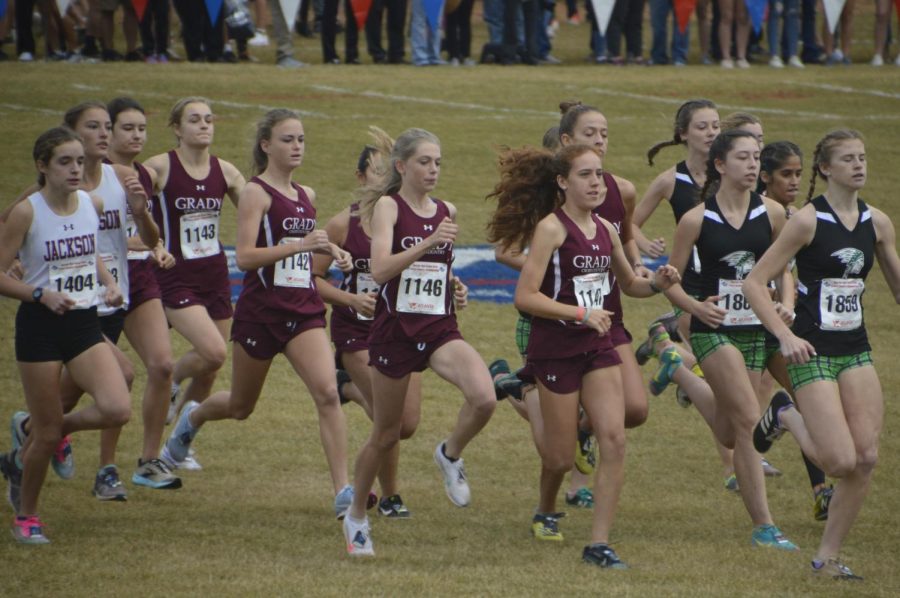 The girls cross country team finished 9th at the state meet this past Saturday, November 7th in Carrollton, Georgia. Five of their top 7 runners finished within the top 70 overall places, giving the girls a total score of 251 points competing in the 5k distance.

Sophomore Emilia Weinrobe finished 41st with a time of 21:52, and was Grady’s second-best runner. Weinrobe was optimistic about the outlook for the girls before the race because of the team’s improvement and depth.

“I think the girls will do well because we have a really solid, deep team this year,” said Weinrobe.  “All of us have worked so hard and gotten so good this season.”

Going into the meet, head Coach Jeff Cramer was similarly optimistic about the likelihood of finishing high in the meet.

“I’m hoping they’ll go at least sixth place,” Cramer said. “That’s what they are rated for right now. If they have a really good race, I think they could move up maybe one or even possibly two places. Sixth or better would honestly be really great, and hopefully doable.”

The team was led by sophomore runner Jamie Marlowe. Marlowe placed 24th, finishing the race in 20 minutes and 53 seconds.

“Last year, I had a bad season due to some medical issues, which was basically iron depletion, which was rough for my season,” Marlowe said. “I wanted to make a comeback this year, and I think being consistent and teamwork has really brought that all together.”

Despite consistent, fast times throughout the season and a strong showing by Marlowe, who missed her season best of 19:59 by less than a minute on the challenging state course, the team failed to meet their high expectations at the state meet. The girls were projected to be the sixth finisher overall when they entered the state meet, but their 9th place result was a disappointment.

“We didn’t come home with the results we had envisioned, but we had some really tough competition. We definitely gave it all we had.” Marlowe said after the race.

Despite this, the team hopes for a brighter future. The team consists mostly of younger athletes, with only one senior graduating this year. Younger athletes like eighth-grader Sierra Pape from Howard Middle School, who made the jump to high school cross country this season due to her impressive ability, leave the team with room to grow in the coming seasons.

“I think we’re really lucky that we’re a young team, as we’re only losing one senior, and we’ll get some good eighth-graders from Howard, so we’re just going to keep improving,” Marlowe said. “It only gets better from here.”