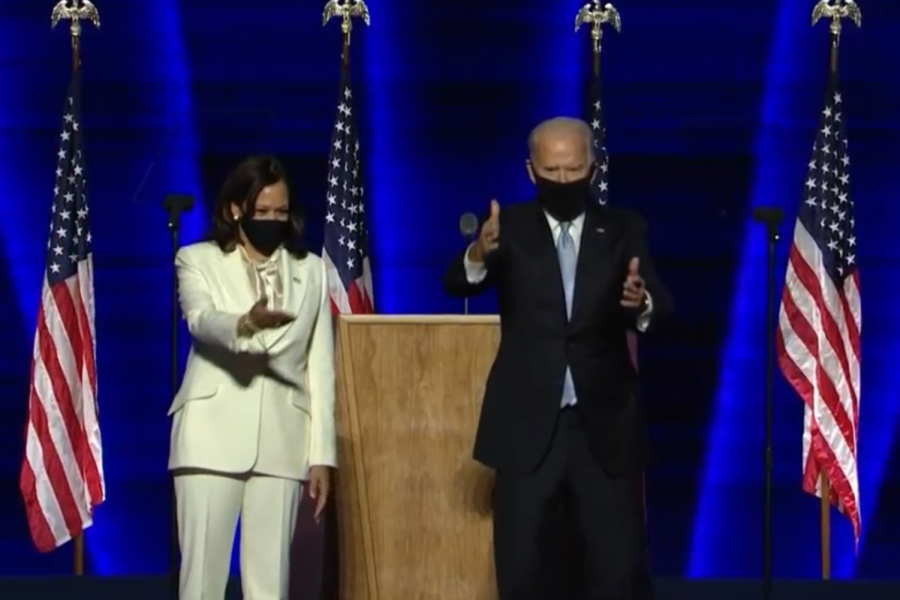 President-Elect Joe Biden and Vice President-Elect Kamala Harris greet the American people during their acceptance speech. This event drew a massive crowd to the the stage in Biden's hometown of Wilmington, Delaware.

Fueled by an increased early and absentee turnout in the crucial battleground states of Michigan, Wisconsin, Pennsylvania and Georgia, former Vice President Joseph R. Biden will be the 46th President of the United States, according to the Associated Press, which called the 2020 election today. President Donald Trump refused to concede, promising additional legal challenges.

Polls remain close in Nevada, North Carolina and Georgia. Still, with a projected victory in Pennsylvania, the former vice president and senator from Delaware has eclipsed the 270 vote Electoral College threshold needed to win the presidency. Biden will be the oldest US president elected to date and California Sen. Kamala Harris will be the first woman, Black person and Asian American elected Vice President.

However, the Trump campaign has already called for a recount in Wisconsin and Georgia and sued in several key battleground states. The Trump campaign lost injunctions in Georgia, Michigan and Nevada to stop counting votes but won an appeal in Pennsylvania to allow more observers into ballot counting rooms. After falsely claiming that he won Michigan, Wisconsin and Georgia, President Trump is now relying on legal action to potentially win a second term.

In all of the states where the Trump campaign has sued, the president led by double digits late Tuesday night but began to lose ground as states processed absentee ballots. Both the Trump and many of his supporters have characterized these absentee ballots as an attempt by Democrats to steal the election despite no reports of election tampering in any of these states.

Immediately following the projection of Biden’s victory, President Trump continued accusations of voter fraud despite no evidence to support it, tweeting: “I WON THIS ELECTION, BY A LOT!” In contrast, the Biden-Harris campaign lowered their social media presence until finally addressing the nation in dual victory speeches from Willmington Delaware.

The delay in election results, potential legal challenges and increased disinformation surrounding the election had increased anxiety for voters, as no victor was declared on election night.

“Unlike previous years where the results were typically called on election night, the prevalence of absentee ballots is drawing the results out significantly,” Grady senior Henry Gelber said. “I think this delay is causing greater stress and anxiety, especially in young voters.”

Biden currently leads in Georgia by roughly 7,000 votes and the margin will likely trigger a recount. Before any news organization called Georgia, many local democratic politicians predicted a Biden victory, including Atlanta City Councilman Matt Westmoreland who tweeted Wednesday night that he projected Georgia to go to the former vice president.

“I felt confident the morning after the Election Day looking at how the initial mail-in numbers went that it just seemed logical that the state would continue flipping,” Westmoreland said.

In addition to the presidency, Georgia has two Senate seats up for grabs in this election. Both the first race between incumbent David Purdue and challenger Jon Ossoff and the special election between incumbent Kelly Loeffler and Rev. Raphael Warnock are expected to advance to runoffs on Jan. 5.

Given Democratic stumbles in other Senate races, these two races will likely decide who controls the United States Senate for the first two years of a Biden presidency.

Grady graduate Avery Allen says he voted for Biden and Harris because they will protect the nation, as well as support his personal views.

Maggie Wells, a senior at Emory University majoring in political science, agrees that Biden is progressive and will make crucial changes for the country. She also believes that Biden will make necessary steps forward in terms of climate policy.

“Based on his policy agenda, I think that hopefully, he would start to make substantial changes in our climate policy,” Wells said. “Perhaps [Biden would] rejoin the Paris Accord which he could do without Congress if the Senate remains in Republican hands.”

While some citizens gave Biden their vote because of his progressive views, others voted for him due to their dissatisfaction with the Trump presidency and fear of a second Trump term.

“I voted for Joe Biden and Kamala Harris because we need a president who will restore decency, honesty, and democracy to our country,” Hallett said. “These are all things that I feel have been slipping away over the past four years.”

Even with a Biden victory projected, some supporters remain melancholy about persistent divisions in the United States following four years of President Trump.

“I was hoping for a larger number of voters to want a change in leadership,” Howard Middle School parent Catalina Sibilsky said. “We went into this election a divided country, and we are coming out as divided, and that worries me for our future.”