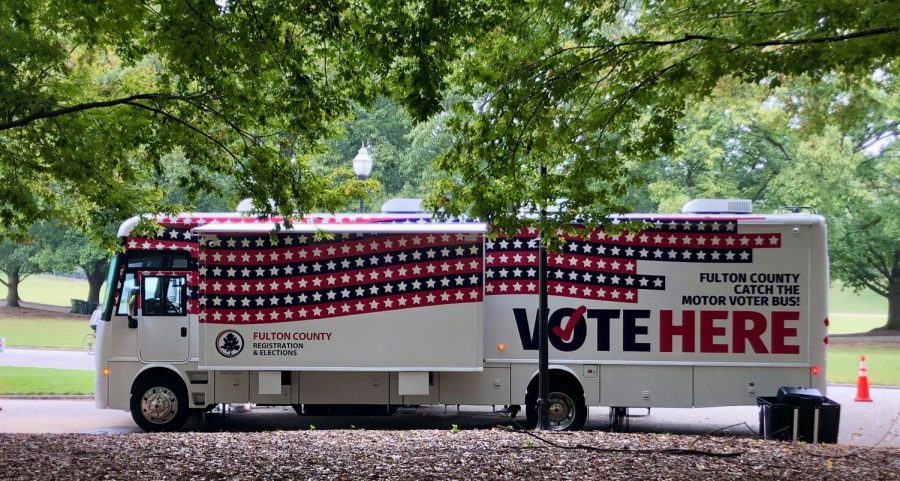 One of the two new Fulton County mobile voting units parked in Piedmont Park on October 27. Social-distancing markers lined the sidewalk and "vote here" signs marked with arrows guided voters toward the unit.

Fulton County’s new mobile voting precincts offered early voting in 24 different Fulton County locations, including Ponce City Market, the Atlanta History Center, and Piedmont Park. The units are large enough to hold eight to 10 voting stations and are the first of their kind in Georgia.

“On the outside, it looked like a trailer,” Grady parent Liz Lieberman said. “The inside was maybe 10 units. This didn’t bother me at all, but I’m not certain it was as private as I’m used to.”

Lieberman said that she felt people could have easily looked over her shoulder to read her ballot but doubted that anyone actually would. Despite the close conditions inside the mobile unit, Liberman was able to social distance.

“It seemed totally safe, and we have been pretty serious about Covid,” Lieberman said.

According to the Fulton County Voter Guide, all voters were asked to wear masks inside the vehicle and were provided with a sanitized stylus to use touch screen voting machines.

Former Grady parent Susie Lazega found it harder to social distance due to the number of people inside the unit at one time.

“There were at least four or five voters in there at once,” Lazega said. “Plus, there was one person standing in the back for scanning, and there was a gentleman in the front of the bus who was overseeing everything, and there was another guy inside who was handing out stickers.”

Lazega recognizes that she probably would have gone to a larger venue, like State Farm Arena, had she seriously considered how close she would be to other people.

“I feel like we are going into another dangerous time with Covid,” Lazega said. “But I have to say it was quite convenient, right there in the neighborhood.

The addition of the two mobile voting units was part of a larger effort by state officials to assure voters that the November general election would run more smoothly than the June primary election. The primary saw long lines and many issues with mail-in ballots.

“It was just a 15 minute wait, and it was super easy and it was great,” said Grady parent Leslie Moye.

Moye had not planned on voting in person, and had an absentee ballot. When she saw the unit outside St. Phillips Cathedral where she works, she thought it would be easier to go there instead and vote in person.

“I didn’t have my ballot on me because I didn’t know the bus would be there, and I asked the poll worker, and he said it was no problem,” Moye said. “He cancelled my absentee ballot and gave me a voter card. Once we were inside, you took out your card, voted, got your ballot and put it in the machine.”

Like Moye, Lezga had not planned on voting in the unit.

“It was the first day of early voting, instead of my brain tuning into the fact that it was early voting, which I’ve done in the past, I went to my new polling place, which is Morningside Baptist Church,” Lazega said. “And, lo and behold, there was the bus there.”

Lieberman also voted at Morningside Baptist Church on the first day of early voting in Georgia, October 12. Lieberman initially planned on voting at 8 a.m. but was delayed due to technical issues.

“We heard there was a really, really, long line [at eight],” Lieberman said. “It turns out it was because the technology wasn’t working, so people that got there at eight were still waiting when we arrived at ten.”

Despite the initial delay, Lieberman felt that the process was swift and convenient. She went to vote with her husband, and waited in line outside with a group of neighbors in lawn chairs.

“Truthfully, this process was great,” Liberman said. “If they do more of these units around the city, that would be great because it enables people in a much faster way. The whole process is streamlined. No big gymnasium or anything. It is all right there in front of you, which makes everything more convenient.”