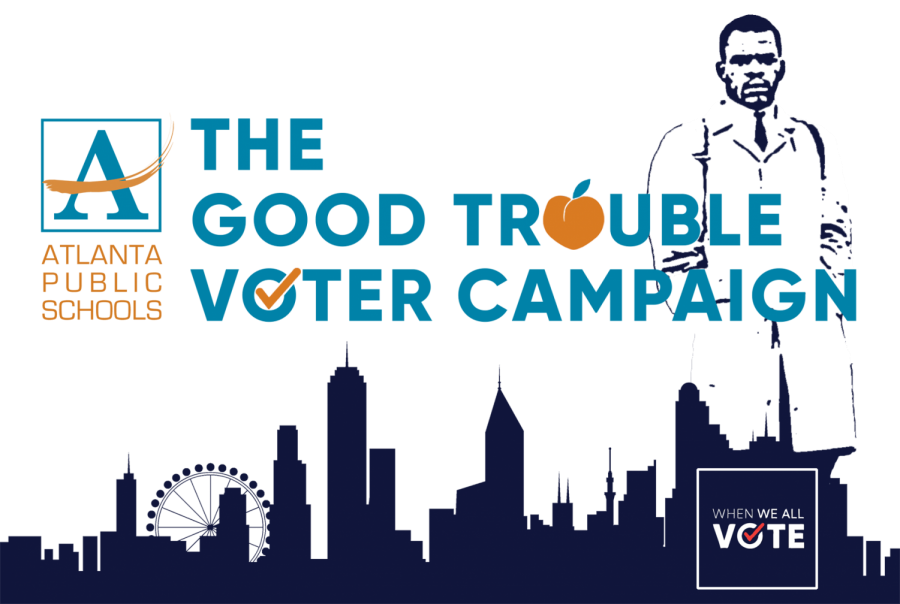 The Good Trouble Campaign is a voter registration and voting initiative new to the district in 2020. Cohorts of students and teachers and administrators in schools across the district worked to ensure that all eligible students were registered to vote and encouraged them to cast ballots.

In 2016, fewer than half of Americans ages 18 to 29 voted. A new district-wide voter registration campaign registered 572 new voters across Atlanta Public Schools.

This year, APS partnered with a national voting initiative, When We All Vote, to launch the Good Trouble Voter Campaign, which aimed to register all eligible age voters before Election Day.

Each APS high school had its own cohort of students and staff who worked on this campaign. Grady senior and first-time voter Forest Dynes joined because of his belief in the importance of the youth vote.

“I hope that we can get as many people to vote as possible because it’s not only for this election, it makes them a voter for the future as well,” said Dynes.

Grady has had voter registration drives in past years. Government teacher Christopher Rhodenbaugh worked on last year’s drive and was the Grady teacher involved with this year’s campaign. He said having an official partnership between APS and When We All Vote made the difference.

“When We All Vote wanted to officially partner with school districts so that student organizers could get actual data on how many eligible voters are in their school so that it’s not ‘let’s register as many people as we can,’ but it’s ‘let’s try to make sure that we reach out to every single eligible voter,’” Rhodenbaugh said.

Janean Lewis, the district Social Studies Coordinator for grades 6-12, was responsible for cementing this partnership. She also named the Good Trouble Trouble Campaign to honor the late Congressman John Lewis, who coined the phrase “Good Trouble,” and to “stir up energy around advocacy.” The campaign was broken up into three phases, the first phase aimed to register all eligible students to vote by the Oct. 5 deadline.

“We got the list from Dr. Bockman (Principal Dr. Betsy Bockman) of the students who are 17 and a half and eligible to be registered in Georgia,” said senior Andre Myette, a When We All Vote student ambassador. “Then we started with very pinpointed, targeted outreach, where we literally reached out to people one on one.”

Schools across APS had similar outreach. Rhodenbaugh and Lewis said that equity issues were a challenge. Lewis said she “took for granted that everyone would have a state-issued ID,” which some  students, who walk or ride MARTA as their primary transportation, don’t have.

“It’s not even an economic indicator; it’s just a matter of culture,” Lewis said. “Transportation is cultural. In those school zones, our staff had to print out the registration applications and take them door to door because there’s also a technology void.”

Myette said the biggest challenge was accountability, ensuring that students who were contacted actually followed through with registration.

“Especially, virtually, instead of face-to-face, it’s easy for people to just say, ‘Oh I just registered,’” said Myette. “You have to really stay on them and make sure that they verify their registration.”

Lewis said the accountability issue “is not an indication of ignorance; it’s an indication of interest” and that “getting young people to understand why voting is important for them and why and how it impacts them” was the biggest challenge.

Rhodenbaugh recognizes this challenge and thinks that as “the most important relationship between a young person and the state,” schools should institutionalize voting registration, whether as part of the overall school registration process or as a graduation requirement, for instance.

“Why wouldn’t the school be a place to facilitate a child being an active participant?” Rhodenbaugh said. “This stuff shouldn’t depend on an enthusiastic group. It should be systematic.”

Lewis said even if voter registration were institutionalized, it would not impact young people casting ballots as much as education around the importance of voting would.

“You can register as many people as you want, but you’re going to have to influence them to actually vote,” said Lewis. “So I think a districtwide voter registration mandate will not land as well in influencing people to actually vote, then if you educate them … if voting becomes a part of our culture, as a school district, then I think that that will probably be more impactful.”

Additionally, Lewis does not think the current Social Studies curriculum educated students well enough on the significance of voting and their role in the voting process.

“I definitely don’t think that we do enough with civic education,” Lewis said.  “As I’m engaging with adults online and watching our news stories and even seeing our national leadership, it’s quite apparent that we need to ramp up our civics education so that as [students] become adults, [they] understand how this works.”

She explains that Social Studies does not have the kind of funding that other subjects do, and so, programming for teachers and students often relies on organizations that provide resources for free. Lewis believes APS can do better as a district, but because guidelines come from the state, getting the Social Studies curriculum to where it needs to be will take “an infusion of support.”

However, Lewis is working to integrate education into her work with the Good Trouble Voting Campaign. Some of the students on the campaign read children’s books about democracy to elementary school children over Zoom. This project is part of Phase Two of the campaign to encourage youth voting, spreading the word through peer engagement that “voting is the best thing to do” and that people should vote early.

As a result of the district’s work with voter registration through this campaign, Teaching Tolerance, an organization that provides resources to educate young people to be “active participants in a diverse democracy,” awarded APS a $10,000 grant. The district will use the grant to encourage people to vote by purchasing virtual photo booths, which will be used for photo ops at the polls, and “activate” polling locations by purchasing food and beverages, chairs, ponchos and possibly transportation to help students who need to get to the polls.

Rhodenbaugh hopes that the partnership with When We All Vote and the Good Trouble Voting Campaign is the first step in pushing voting to the forefront of the district’s focus.