The Deterioration of Political Discourse 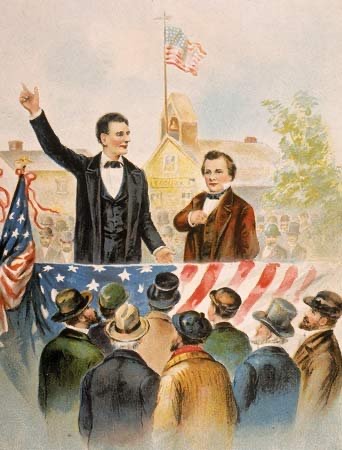 President Abraham Lincoln (left) and Senator Stephen Douglas (right) are illustrated in a depiction of the 1858 Lincoln-Douglas debates. The debates were highly publicized and are regarded as one of the greatest American political debates.

In today’s chaotic world, many Americans seem to be holding onto their past. They glorify the days before divisive rhetoric and mudslinging. However, conflict has always been a part of political discourse.

Even in the beginnings of democracy in Ancient Greece and Rome, dirty campaigning was common. Roman politicians often gave speeches aimed at portraying their opponents unfavorably and to discredit them.

“We have a lot of speeches from Cicero, and he’s very mean to his political opponent’s character,” AP Latin Teacher Amy Leonard said. “It’s very much evident that ad hominem attacks, these character attacks, are incredibly common. They’re vicious, maybe not entirely based in truth, but exaggeration, to call into question the character of your opponent.”

Although we often uphold the founding fathers as model politicians, elections in the early American public often contained character assassinations.

“Right in that first campaign, we started getting some mudslinging,” U.S. History and Civics teacher James Sullivan said. “There were really some very nasty insults thrown back and forth between Adams’s people and Jefferson’s people. There was some nasty campaigning, even going so far as to claim that there were not only extramarital affairs and hinting at Jefferson’s relationship with Sally Hemmings, who was one of the enslaved people that he owned but claiming that one of the candidates had died.”

Conflicts escalated even further during conversations about slavery, which was a major point of contention between Northern and Southern politicians.

“We have situations where a fervent abolitionist on the side of the North would make a speech about slavery and carry it into very personal terms,” Sullivan said. “In one case, the nephew of the senator who felt he had been slurred came in and beat one representative over the head with a club within an inch of his life.”

Tensions were high over slavery throughout the United States but especially in the Western states where there was no clear position.

“Because of the passions on the issues, Douglas and Lincoln decided the best way to do this is to face off against each in hours-long debates about the issues of slavery,” Sullivan said. “The first debates were these senatorial debates between Lincoln and Douglas, the form of which we still call Lincoln-Douglas debates.”

For a time, these political debates seemed to allow peaceful political discussions, where candidates could present their stances to the American people. As technology has continued to develop, however, so have the debates.

“When I was in high school, the 24-hour news cycle was really just starting,” English teacher and Public Forum debate coach, Susan Ramsey said. “The information that amount of time let people have access to was a game-changer as far as what people could know about a presidential candidate, about their personal lives, about their stances on issues. That is probably when there was a significant shift in the way presidential debates were handled because the public was better informed.”

In recent times, debates have become more about politicians’ images and less about their political beliefs and policies.

Additionally, increasing availability has led to an influx of information that can overwhelm people. Global interconnectivity has enabled the spread of misinformation, further distorting facts and mixing them with opinions.

“It’s created the ability for people to become extremely confused, this idea of alternate facts or fake news,” Ramsey said. “There are a large number of people in the United States that have no idea what they should believe as the truth.”

Although political speeches and debates have always been divisive, today, they seem to be straying from their goal of informing people.

“There was some nasty stuff going on in those debates, too, even if they weren’t formal debates,” Sullivan said. “There was definitely a lot of name calling and back and forth going on at the time of this political discourse. We can’t say, ‘we’re the bad guys, they were the good guys.’ There were definitely bad guys back then, people pulling out guns on the Senate floor. We may just be human beings, and we may all want these kinds of chaotic frantic moments but, sadly, people tune in now to see those moments, rather than to hear a clear position from candidates.”