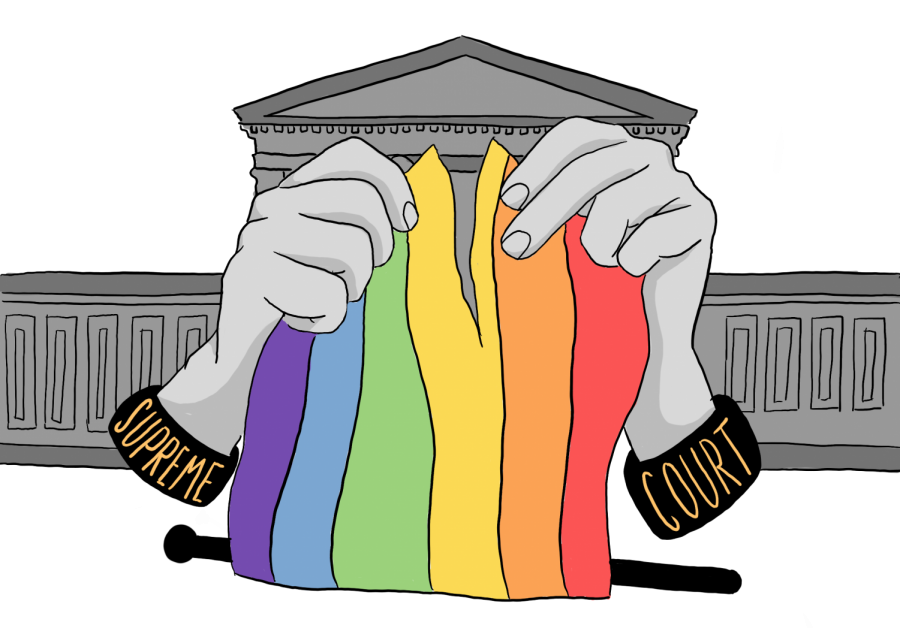 Through explicit opinions of individual justices, the newly configured Supreme Court has inserted partisan values into the issue of marriage equality.

It is undeniable that the Supreme Court has been wrapped up in political polarization, which can be traced back to the United States Senate. Be it Harry Reid’s 2013 decision to end the 60-vote filibuster rule on judicial nominations or Mitch McConnell’s decision not to consider Merrick Garland in 2016, the highest court in the land has become tarnished by party politics.

Party politics directly undermine the independence of the judiciary because the Supreme Court cannot be the final check on partisan decisions if the court is controlled by partisan motivations. While the Supreme Court routinely hears political arguments, it has been known to rule without political intentions. Recently, it wasn’t the Senate that undermined the courts’ integrity but the actions of two sitting Supreme Court justices.

On Oct.5, the Court declined to hear arguments in Davis V. Ermold, a case in which former Kentucky clerk Kim Davis refused to give marriage licenses to same-sex couples. In 2015, the Court ruled in Obergefell V. Hodges that same-sex couples in the U.S. had the fundamental right to marry. Following custom, the court did not give a reason why it declined to hear the case. This process, known as “denying a writ of certiorari,” only says that the court will not hear arguments, not if the court agrees with a lower court’s decision.  What was not customary was the statement of Justices Clarence Thomas and Samuel Alito regarding established precedent in Obergefell V. Hodges.

On paper, both justices Thomas and Alito agreed with the Court as a whole in denying Davis’s appeal. The issue comes with what the two justices decided to do after denying the appeal. Thomas and Alito took a typically mundane process and unnecessarily inserted their political beliefs.

The three-page statement authored by Justice Thomas and joined by Justice Alito ripped into the Obergefell decision five years after they dissented when the case was first argued. Thomas and Alito describe the 2015 decision as an infringement of the “novel constitutional right over the religious liberty interests explicitly protected in the First Amendment.” The statement continues to describe the Obergefell decision as a “problem that only it can fix” and effectively argues for religious liberty protections to be put into place through legislation.

The statement from the two justices could not be more telling of the political nature of the Supreme Court. The notion that Obergefell is a problem that needs to be fixed and the insinuation that there should be religious liberty on the books, in addition to the First Amendment, lines up directly with the official 2020 platform of the Republican Party. This goes against the entire premise that the court should be a non-partisan institution.

The partisanship within this statement is so clear that both Chief Justice John Roberts who wrote a blistering dissent in 2015 and Associate Justice Neil Gorsuch refused to join Justices Thomas and Alito’s statement. Associate Justice Gorsuch stated in his 2017 confirmation hearing that Obergefell has been wrongly decided. Even if they may agree, Roberts and Thomas understand that the court should not be used to push a party agenda.

The main question asked following this statement was: why now? Why after five years, over 300,000 same-sex marriage licenses and a separate case reaffirming Obergefell have justices Thomas and Alito decided to renew their standing on marriage equality.

The answer is clear: the nomination of Judge Amy Coney Barrett. Following the death of Justice Ruth Bader Ginsberg, there are now only three justices on the court who voted for Obergefell. With the confirmation of Judge Barrett by a Republican-controlled Senate, the Supreme Court now tilts 6-3 towards conservative justices.

This majority would allow the Court to tear holes in marriage equality or throw the Obergefell decision out altogether when cases come to the court. The Court is already set to hear arguments on a religious liberty case, and a 6-3 majority would give Thomas and Alito the judicial cover to accomplish their largely partisan goal.

Both Justice’s Thomas and Alito are well within their bounds to concur or dissent on any case that comes before them based on legal measures, but that is not what the Justices did in writing their decision. These clear political and partisan motivations undermine the integrity of the entire American judiciary by pulling into question the motivations of every judge in the country. Instead of making decisions based on individual cases, Thomas and Alito publicly announced their decision on future cases without hearing one oral argument, something that cannot be accepted.