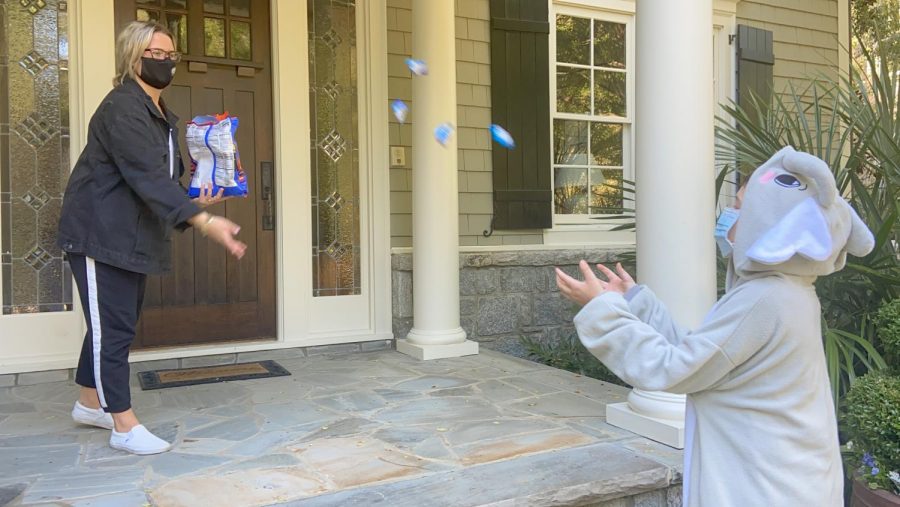 Noble Park resident tosses candy to a trick-or-treater, a method called "Yeet the Treat," to try and stop the spread of COVID-19.

Neighborhoods throughout Atlanta have new ways to celebrate Halloween this year while staying safe and socially distant.

Halloween parades across the city have been cancelled due to a state ban on gatherings larger than 50 people. Despite this, residents have developed creative ways to adapt trick-or-treating, haunted houses and other spooky events to the Covid-19 pandemic.

Noble Park and other nearby neighborhoods created methods for kids to safely trick-or-treat. Hunter Angove, resident of Noble Park, typically works with the Grady Knights of Sound marching band for the annual neighborhood parade.

“Instead of the parade, we are going to encourage people to safely trick-or-treat and to put a white sheet of paper on their doors if they do not want to participate in trick-or-treating,” Angove said. “This is to help the little kids identify which houses not to knock on.”

“We figured that if we cancelled trick-or-treating, some people would just do it in a not Covid-19 safe way,” Angove said. “We knew we couldn’t force hundreds of homes to agree on the same method when it comes to something as endeared to them as trick-or-treating. The best we could do is create some guidelines to try and help people.”

In September, Andrew Beattie, a dad from Cincinnati, Ohio invented the Candy Chute, where candy slides down a chute to kids trick-or-treating. Some Atlanta neighborhoods plan to adopt this method and will implement it into their Halloween routines.

“Some of the parents around us have built candy chutes to safely distribute candy,” said junior Jovian Krey-Patel, a Midtown resident. “I think it’s a really creative way for kids to have fun and get candy while staying socially distant.”

Morningside Elementary School annually hosts a Halloween carnival, which has been cancelled this year. The carnival usually includes rides, food and a haunted house run by fifth-graders.

The cancellation motivated Morningside parent Candice Navarro to put her own spin on this tradition.

“My daughter has gone to the festival every year and has seen the fifth graders have a chance to dress up and be in the haunted house,” Navarro said. “She always looked forward to being old enough to do it, but now, here she is in fifth grade and not able to do it.”

Navarro decided to host a socially-distant haunted trail in her backyard to give Morningside students a sense of normalcy. Families can sign up for time slots to enter the trail to avoid overcrowding.

“I really want the kids to dress up and have a fun time and to have something to look forward to because there’s not much we can do during this crazy time,” Navarro said.

Other residents will host smaller events to replace their usual, large celebrations. Gail Wilson, a resident of the Virginia-Highland neighborhood, is organizing a Halloween basketball match with a small group of kids.

“Halloween is such an important tradition at our house,” Wilson said. “We normally host a giant party for our street. This is our one big party each year that everyone always looks forward to. I wanted to do something for them and celebrate and have fun in a safe way.”

The Candler Park neighborhood doesn’t have major Halloween plans, so residents created their own creative ways to celebrate.

“My friends and I will be having a socially-distant Halloween movie watching party,” junior Zephy Schroeder said. “Halloween is one of my favorite times of year, so I still wanted to figure out how to celebrate and have fun while still being safe.”