Forster stretches for new opportunities as a yoga instructor 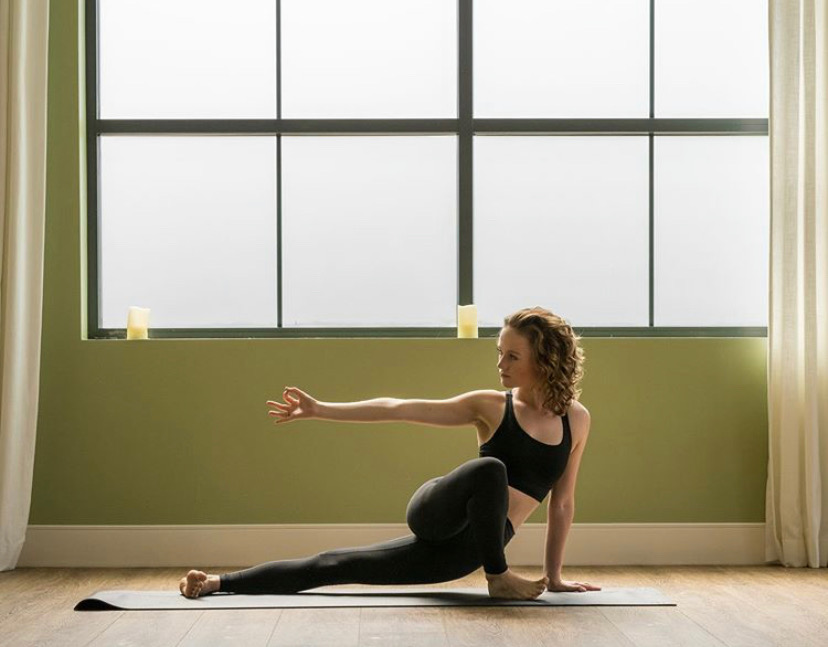 Senior Avery Forster holds the Horizons pose at Highland Yoga, a pose meant to open the hips and to strengthen the legs, arms, and spine.

Senior Avery Forster discovered yoga when she was 16 as a way to relieve stress while building strength.

Forster recently became a yoga teacher at Highland Yoga, which has locations in Buckhead, Decatur, Reynoldstown and Virginia-Highland. She is one of the youngest to ever complete a teacher training at the studio.

“I’ve been off and on with yoga for my whole life, and then a friend of mine took me to a yoga class,” Forster said. “From there, I’ve just fallen in love with that studio and yoga in general.”

“One of the first things I read about the studio’s teacher training was that you had to be 18, and I was devastated that I wasn’t old enough,” Forster said. “I kept talking to the people that worked there that I was really interested in teaching yoga, and they finally let me do it because they all knew how badly I wanted it.”

Employees at Highland Yoga noted Forster’s strong determination to pursue training. The staff believed Forster was meant to teach yoga, despite her age.

“Avery told the studio owner and the other managers that she was really committed to this and that she was ready,” studio manager Sarah Smith said. “I think they knew enough of her that they would trust her and bring her into the program.”

“Before you even start getting into the poses, you have to learn the philosophy that goes into yoga,” Forster said. “After all that, you learn every single pose that could be used in a class. You have this huge book and learn anatomy, which poses help which parts of your body.”

As the youngest in the training group, Forster was anxious about the process. Having other people along her side supporting her helped motivate Forster as she often questioned herself: “How do I become a yoga teacher at just 16?”

She adapted and gained confidence.

“The more time that went on and the more time I got to know the other people I was training with, I just felt so much happier,” Forster said. “Every Tuesday and Thursday during my training, I got to see some of my now-best friends, which helped ease my anxiety tremendously. They all knew that I was there for a reason.”

Now 17, Forster teaches Vinyasa yoga, which focuses on changing poses after each breath. The fast-paced form of yoga was calming to Forster and motivated her to share that feeling with others.

“You don’t have the time in Vinyasa yoga to stop and start worrying about other things,” Forster said. “You’re there, and you’re moving really fast, and your mind goes to a place of complete focus, not thinking about anything else. It is an amazing feeling, and I wanted to share my experience with others. I want these people to leave feeling refreshed, both mentally and physically.”

While teaching nine classes a week anytime from 6 a.m.can be difficult for Forster to balance in her schedule, she has found the little parts of her job that bring joy and remind her why she is passionate about teaching yoga.

“Every single Thursday at six in the morning, I have one student that shows up every time,” Forster said. “Her consistency and a lot of other students’ consistency is what reminds me about what I am doing this for. Teaching can be really hard sometimes, but then I remember the joy I feel when I’m teaching and the students’ positive reactions after each class.”

Before taking up yoga, Forster played lacrosse from sixth to eleventh grade. She struggled with an eating disorder during her junior year, and realized her relationship with lacrosse was only to burn calories. Forster knew the physically demanding sport was not satisfying her anymore.

“I just wasn’t happy with lacrosse anymore,” Forster said. “I thought to myself: do I want to keep pushing myself to my edge every single day, where I feel horrible at the end of practice, or do I want to value my mental health? Now, I have a lot of muscle, and I just feel so much better, and I can totally see a difference in my body.”

Not only has yoga benefitted Forster physically, it has also improved her mental health, from comforting her anxiety to helping her overcome an eating disorder.

“Being able to go and have that hour to myself and not have to worry about anything, is so relieving, especially during my stressful junior year last year,” Forster said. “Now, I’m able to manage my stress better and I’m not as anxious as I used to be, and I’m even sleeping better.”

Teaching yoga has also served as a social outlet. The ability to be around people of all ages helped push Forster to be more successful, she said.

“The friendships I have made haven’t been weird or awkward because of the age difference,” Forster said. “It’s the central connection we all have through yoga that has been really special. I have met some of the coolest people of all different backgrounds and all different races and genders.”

Forster finds that elements of her leadership experience in yoga can be applied to other aspects of her life.

“I take a lot from what we learned in teacher training, like the philosophy part, and apply that to parts of my life,” Forster said. “I think that yoga is something that everyone should try at least once, whether it’s a beginner’s class or more advanced.”