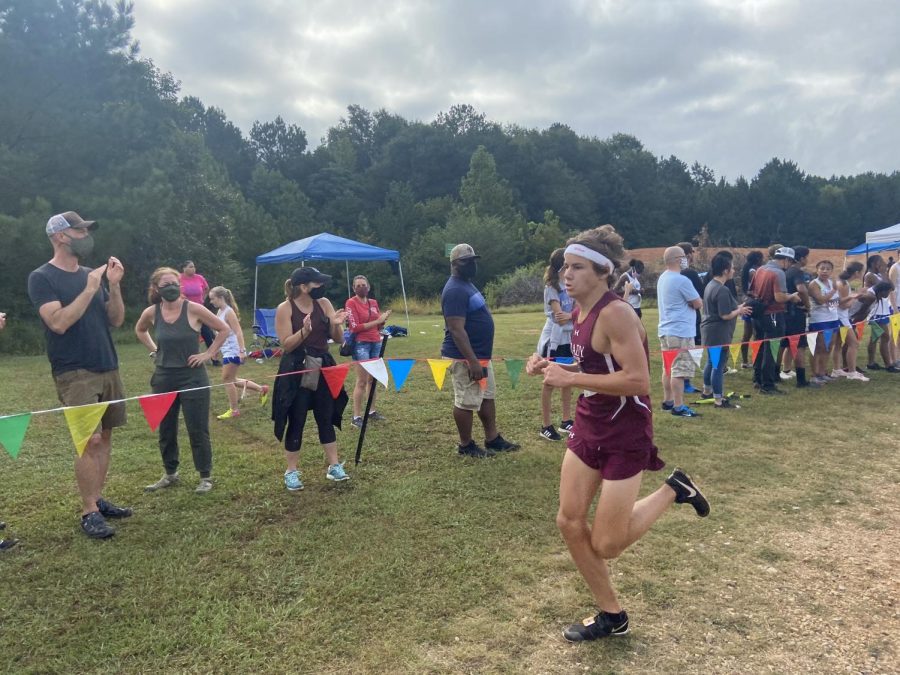 Everett strides to finish the race.

With three meets in the book after the Wire2Wire Invitational on Sept. 26, the varsity boys cross country team has  two top five finishes on the season.

The Knights’ best result came in their second race of the season at the Lions Invitational on Sept. 11th, in which they placed fourth.

“We raced well and raced as a team,” sophomore Zach Spangler said. “We got a good placement at fourth, even with two of our other top runners, Sam Rose and William Palmer, being injured.”

The top finisher for the Knights  was junior Everett Schroeder, who placed fifth runner overall with a 17:22 time.

With five out of six of their best runners being 2020 graduates, the team looks to fill those roles with new runners and, hopefully, qualify for the state championships again.

“We lost a lot of talent, but we have good talent growing up and recovering up,” senior captain Brody Dowling said. “Everett is placing in the top five as a junior and Zach is a great runner. We also have Palmer who is currently hurt, but [he] has been putting in the work.”

As the new top runners for Grady emerge, COVID-19 and the concerns surrounding it have begun to diminish for the runners. Because of how breathing intensive running is, most runners don’t wear masks while racing.

“Most people don’t wear masks while running,” Schroeder said. “A lot of the schools we race against don’t really care about masks. It doesn’t bother me too much personally, and no one I know has gotten sick yet, but it’s something to look out for I guess.”

Runners are permitted to wear a mask at the beginning of a race, but are heavily encouraged to take them off as the race goes on, as running with a mask on can cause a runner to pass out.

“We started up morning practices and practices in general later because of Covid,” Dowling said. “So yeah, we had a little late of a start to the season, but we are going now and times will be improving.

As the date approaches closer and closer to the state championship the team looks to get better and better.

“We are all here to improve,” Schroeder said.