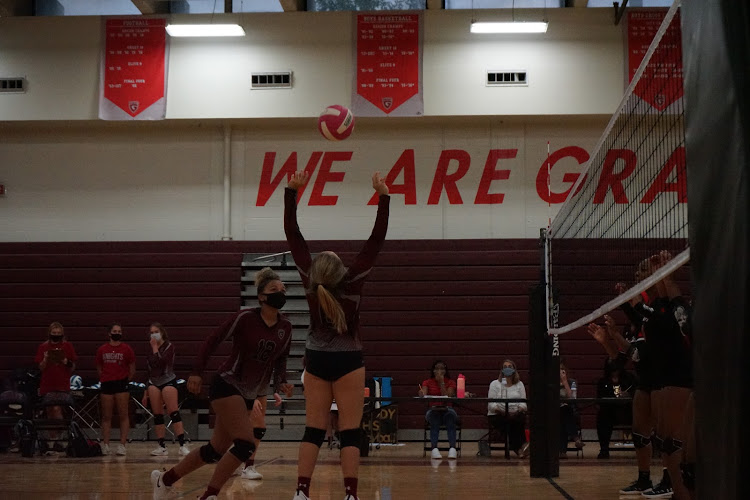 Senior Carson Gray sets junior Jade Lewis up for a spike against Tri Cities High School. The Knights won by a score of 2-1.

Coming off a playoff season in 2019, the volleyball team has started 4-6 through its first ten matches.

“I think as a team we need to work on communication, and our team chemistry could also use some work,” said junior Jade Lewis.

Players said the team has struggled with chemistry, and senior captain Jillian Serfozo added that the ongoing COVID-19 pandemic has presented challenges.

“Our biggest weakness is communication on the court,” Serfozo said. “In past years, we’ve been able to have bonding trips outside of Grady, and we did things like community service, but this year we are only able to see each other in the gym with masks.”

The team plays games wearing masks despite no requirement to do so.

“We have to do check-ins with our temperatures,” Lewis said. “We also have to answer certain questions like have we experienced any symptoms.”

Head coach, Sandi Stein, who has been coaching volleyball for over 35 years, recently joined the team. According to her, the trickiest part of coaching during a pandemic is overall player safety.

“[the most difficult part] is just keeping our players protected,” Stein said. “It’s really just about keeping them safe whilst following the safety protocols.”

With the ongoing COVID safety guidelines, the season has felt different according to senior and captain Kiara Blackman, who is the right hitter.

“Last season there were spectators; you had that support; you were able to bring pregame meals,” Blackman said. “This year you can’t do any of that.”

Despite all the things happening outside the gym, the girls are locked in at practice.

“We’ve also been focusing on fast-paced drills,” said Lewis. “So when we get in a game, we won’t be caught off guard because we’ve played fast-paced teams already.”

Stein relies on countless players on the team, each for very different reasons.

“Kiala Blackman leads a lot by example, she’s a very shy person but when she’s on the court, she’s a beast,” Stein said. “Carson Gray has done a great job for us, she’s our defensive specialist.”

The seniors and captains have embraced their leadership roles.

“As seniors, we try to stay as positive as possible, even when we’re facing a really tough team,” setter Carson Gray said.“We’ve noticed that when one of us gets down, it impacts the whole team, so we really try to remind players not to get frustrated while playing.”

“This year we’ve really tried to enforce this seniority type aspect to the game,” Lewis said. “Like whenever we stretch, they’re always in the front, counting, and they are our leaders.”

Serfozo broke her hand on August 20th. She fell onto it whilst practicing. Despite this, she comes to every game to show support for the team.

“Since I broke my hand, I’m not able to play the rest of the season, but I’m still able to encourage and cheer on my teammates from the side of the court,” Serfozo said.

Stein has appreciated the work Serfzo has done despite the injury.

“She’s taken on the role of student coach,” Stein said. “She’s my predecessor.”

The team shares the same goal for season; however, there are still things to work on if the team wants to advance farther in the playoffs than a year ago.

“It depends on how well our chemistry grows,” Lewis said. We can go all the way to state, and I think we have a better team.”

Steins goals lineup with the rest of the team.

“Our team wants to be in the top 4 of the region,” Stein said. “We also want to make it through the first and second rounds of state.”