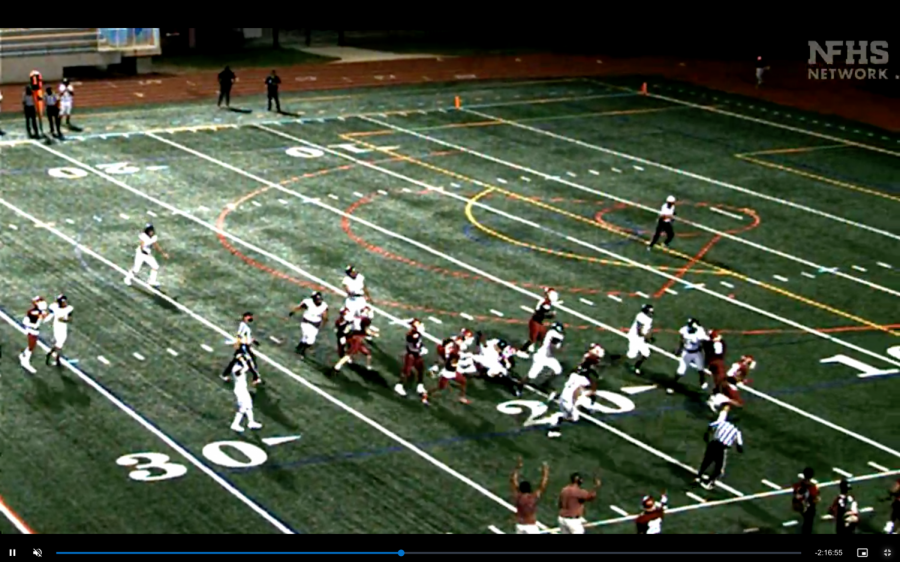 Grady's defense recovers a fumble and runs it into the endzone against Fayette County, seen virtually.

In past years, on an average fall Friday night, the stands at Grady Stadium are packed with fans coming to watch the Knights play football.  Students can be seen wearing red, black or bright neon green clothing in a coordinated effort to show school spirit. Loud chants rise from the student section, as fans excitedly express their contempt for the opposition.

This season the football viewing experience will be very different, to say the least.

Due to COVID-19 concerns, Atlanta Public Schools has restricted fans from attending any sports competitions hosted by APS schools. The alternative for fans is a live-streamed video of the game recorded from unmanned camera atop the football stadium press box. The National Federation of High Schools’ livestream service costs $10.99 a month. Over the course of a three-month season, this will be hardly less expensive than attending every home game at the average ticket price of $7.00, but for a far more disappointing experience.

For the first 15 minutes of Grady’s  virtual game against Fayette County on Sept. 4, players, coaches, trainers and officials meandered across the field, conducting their usual pregame routines. A few cheerleaders were occasionally visible in the corner of the screen, encouraging an empty stadium as the teams warmed up and huddled together to discuss tactics and game plans. Keep in mind, all of this occurred in silence.

At kickoff, there is an appreciable increase in the allure of the video feed as action begins, although there is still no commentary, nor any discernible sound at all. In addition to the audible shortcomings, the visuals also leave much to be desired. The picture is hazy, at best, and there is often nothing to see at all when the camera strays from the actual play and focuses on an empty goalpost upright or section of the field.

Now, it’s easy to complain about such issues when we’re all spoiled by the excitement and intensity of being in a crowded stadium cheering on our team. It is football, something we enjoy and appreciate, and the ability to watch it from home these days is certainly worth something. However, the game, which lasted almost three hours, was so monotonous and boring, with the substandard footage and lack of sound to accompany it, that you’d be hard-pressed to find any decent reason to occupy your time with it.

The boredom of watching the games live just goes to show how much the atmosphere at a football game contributes to the overall experience. As I watched, I felt my attention slip further away from the content of the footage, a particularly bad thing to do when following a game in which there is no scoreboard visible and the plays are often difficult to ascertain an outcome from. Following every play can be especially difficult because often the uprights or end zone are out of the frame due to poor camerawork, and penalties are impossible to discern.

The longer intermittent periods, like timeouts, referee discussions, halftime and quarter breaks, are so empty of entertainment that they leave you wishing for the often irritating ads we see on TV when we watch higher levels of sports just to fill the time.

At $11 dollars a month for an extremely disappointing experience, I feel justified in saying that the usefulness of the virtual viewing of football games this year is slim to none. Now, the alternative is to not have a way to watch games at all; at least the livestream allows interested parents, college scouts and journalists to view games safely. So, it’s not all bad, but any viewer is likely to lose interest quickly, and as a fan, the overall experience of virtual football game viewing is pathetically dismal.