A football season without fans 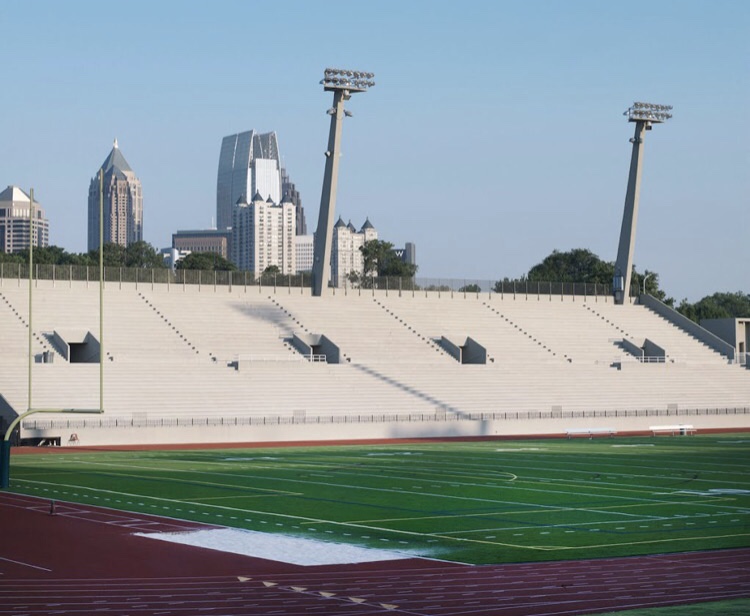 The Grady Stadium is seen empty, as sports have been disrupted due to COVID-19.

Attending a football game is an incredible experience for coaches, fans, parents and players alike. The presence of the crowd, cheers from both teams’ student sections, parents, supporters and players on the field and sidelines contribute to the electric atmosphere underneath the bright stadium lights on any given fall Friday evening.

This year, however, due to precautions combating the spread of COVID-19, football games and their surrounding environment will look extremely different.

“The APS policy, and by extension, the Grady policy, is that no spectators are being allowed at any athletic events hosted by APS,” Grady Athletic Director Patrick Johnson said.

With no parents, college scouts, friends or classmates to fill the stands, this season is certain to be an entirely unique experience for athletes.

“I definitely think that having fans can help boost players’ energy and their motivation,” junior running back and slot receiver Dakota Almazan said. “I think that it might cause some people’s energy levels to be lower.”

With many athletes accustomed to the energy fans bring, players like Almazan have been left unsettled on nearly every play due to the empty stands this season.

“I’ve done camps and stuff before without people cheering but nothing like this ever before,” Almazan said.

Others, like sophomore defensive end Max Ledbetter, are more familiar with playing in a desolate stadium.

“I played on JV before, and there was nobody there. Nobody.” Ledbetter said. “So yeah, I’m used to it.”

Despite his experience with playing in an empty stadium, Ledbetter still appreciates the benefits of fans. He realizes the value of a crowd backing the team through its highs and lows during gametime.

“The crowds — they add a lot of momentum for us,” Ledbetter said. “If we start doing well and we can hear the people in the stands cheering us on, it just gives us some support and some confidence.”

“The fans can really bring an energy to the team, and we get hyped up from that. It makes us play better,” Grant said. “I think even without the fans though, it’ll be quieter. We’ll be able to focus and be able to hear the play calls better.”

The fans bring excitement, but the absence of their sometimes distracting antics can, to some extent, prove to benefit the team.

“It’s definitely going to be easier to focus on the game itself,” Johnson said. “Sometimes, you get caught looking up in the stands or distracted by other things going on in the stadium. Now there’s nothing else to distract you other than what’s going on on the field.”

Despite the strange conditions the Knights face this season, they are still hopeful and confident in their ability to succeed.

“It’s going to help us focus on the game and zone in to make plays,” Almazan said. “I don’t mind it at all, really.”

The players plan to keep their chins up and remain optimistic about the outlook of the season. Missing fans will be a new experience, but at the end of the day, players are thankful that they are able to play the game at all.

“A good part of sports is performing in front of people. I think that’s always been a part of sports,” Johnson said. “There’s obviously a lot going on with the situation, and given the circumstances, making the seasons happen will require some sacrifice. But if you gave me the choice to compete without people in the stands or not compete, I know which one I’d choose.” s