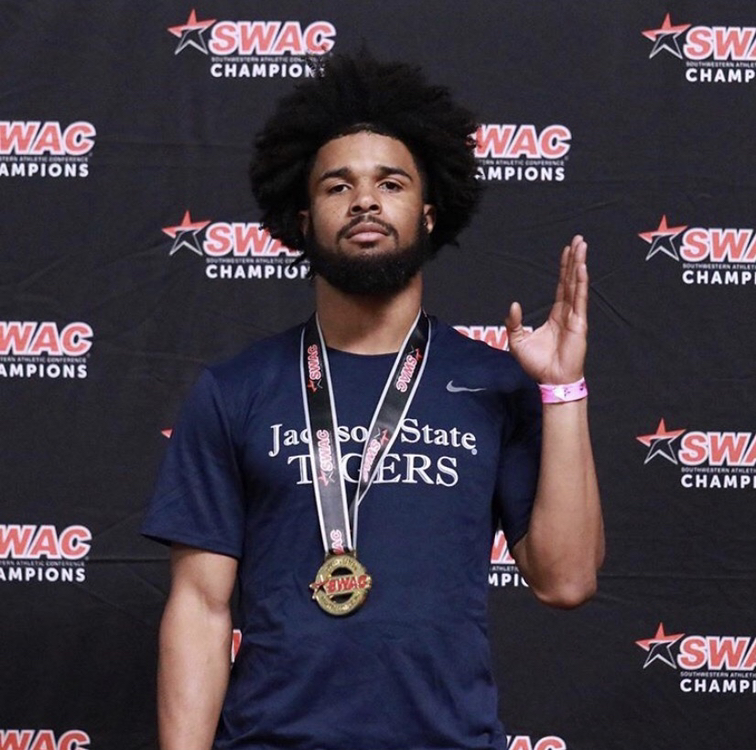 In a virtual tournament created by MileSplit Georgia, 2017 Grady alumnus Christian McNair-Jones was voted the top Georgia boys hurdler in the last decade.

Going into the tournament, McNair-Jones was the 12th seed. As a result, many were surprised when he won nearly every poll matchup by a landslide. It was only in the finals against 2018 Westlake alumnus Rainey Anderson that McNair-Jones’ competition came somewhat close to beating him, receiving 44.58 percent — or 8,213 — of the 18,423 votes.

“I was surprised [when I won] because of all the great athletes I was competing against in the bracket,” McNair-Jones said. “I didn’t expect to get past the second round.”

McNair-Jones joined the Grady track and field team in 2014. After working with him for only a short amount of time, head boys track coach Delbert Ellerton realized McNair-Jones was special.

“We would run together, and one thing that I noticed about him early on was that he had this desire to win that you can’t just put into an athlete,” Ellerton said.

During McNair-Jones’ three years of competing in middle school track, he was strictly a 400 meter runner. When he joined the Grady track team, however, he switched to predominantly running shorter sprints.

“I switched to sprints because I had something to prove to myself and everybody else, and I just wanted to switch up what I was doing,” McNair-Jones said.

In March of McNair-Jones’ freshman year at Grady, he experienced an injury in his right quad that put him out for the rest of the season.

“I was the second leg on the 4 x 100 meter relay, and once I got the baton and started sprinting, my right hip gave out,” McNair-Jones said. “It was feeling really weak on me, and I guess I was pushing it too hard. A ligament ripped the tip of my hip bone, and I had to sit out for six months.”

After McNair-Jones recovered from his injury and returned to the team the next season, Ellerton suggested that he run hurdles. At first, McNair-Jones was reluctant.

“My initial reaction was, ‘This man is crazy!’” McNair-Jones said. “All I wanted to do was sprint; I never saw myself doing hurdles.”

Ellerton believed that McNair-Jones would have a leg up on his opponents if he ran hurdles.

“He was really fast; he was really explosive, and he was really competitive,” Ellerton said. “When putting together a track team, if you have a really good hurdler, that’s pretty much like 20 points every time they step on the track. Most coaches put kids in there because they don’t have anywhere else to put them. If your stronger athletes run hurdles, they are always going to do well. All they have to do is learn the technique of the event.”

“We came to see eye to eye on it,” McNair-Jones said. “He saw the talent that I had, and I realized that I wasn’t bad at hurdling. I already had natural form, and I had the speed.”

For his first year running the 300 meter hurdles, McNair-Jones was the city and region runner-up. At the state meet, McNair-Jones made it to the finals and was slated for second place until he stumbled over the last hurdle, which was 10 meters away from the finish line. He ended up finishing seventh.

“When I look back at it, I am pretty happy with what I accomplished my first year,” McNair-Jones said.

According to Ellerton, McNair-Jones is the optimal athlete.

“He’s just one of those athletes that you like to have on your team because they raise up everybody else. They are not going to make excuses, and they are always going to be ready to go,” Ellerton said. “He has a way of pulling this competitive instinct out of himself, and that is what I always will remember about him.”

Several of McNair-Jones’ personal bests are highly ranked in the Grady track records. He is first in two events — the 110 meter hurdles and 300 meter hurdles. He is third in both the long jump and 100 meter dash.

Currently, McNair-Jones is a rising senior at Jackson State University. At his last track meet, the 2020 Southwestern Athletic Conference Indoor Track and Field Championships, he finished first in the 60 meter hurdles.

“I was able to win conference this year by truly dedicating myself to staying healthy,” McNair-Jones said. “I have faced injuries throughout my whole athletic career. I knew if I was healthy, I would run fast, and I would run good.”

Adjusting to the demands of collegiate track was, at first, difficult for McNair-Jones.

“One of the biggest challenges I faced coming into college was being mentally strong,” McNair-Jones said. “My athletic ability was there, but in order to be a great athlete, you have to have a strong mindset. My mindset was killing me my freshman year because of the simple fact that I knew I was racing against collegiate athletes. I automatically thought that because they were ahead of me, they were better than me, which was not the case.”

McNair-Jones’ dedication to track has stood the test of time.

“He has this drive and desire to be the best,” JSU head men’s track coach Mark Thorne said. “He always says, ‘Coach, I got you.’ He works hard in practice even when a workout is difficult. When it comes to competition, he’s always ready to do whatever it takes to be successful.”

In the end, McNair-Jones is grateful for being recognized as a top Georgia athlete.

“Winning the title ‘hurdler of the decade’ is truly a humbling experience and also a blessing because I’ve witnessed a majority of those hurdlers do amazing things,” McNair-Jones said.