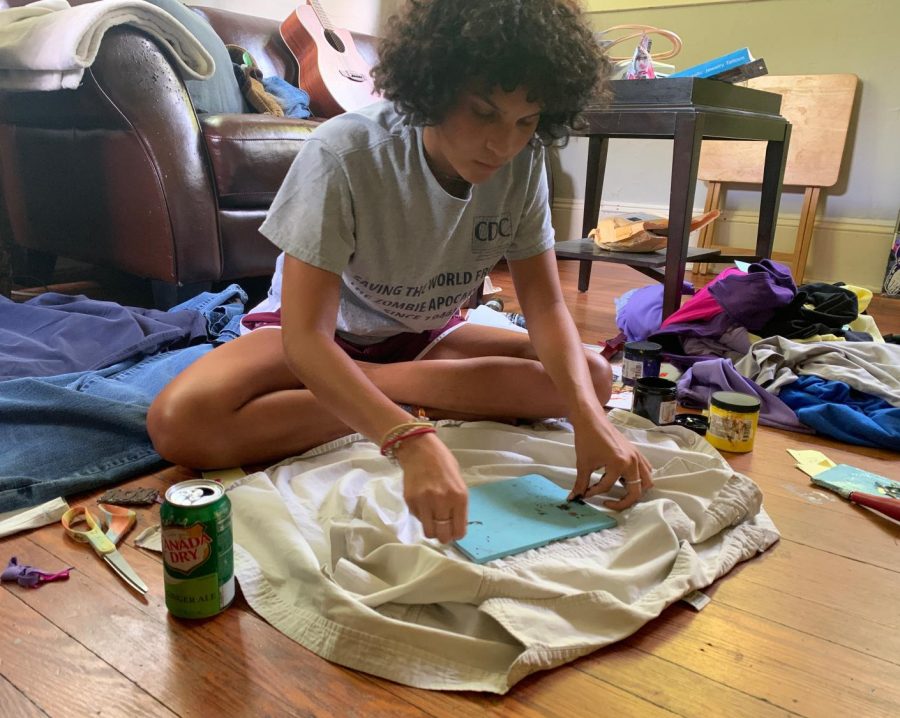 Senior Zola Sullivan embellishes a t-shirt with a hand-carved stamp. She will later list it on her Instagram account and will donate all of the proceeds to the Black Visions Collective and the Center for Black Equality. Sullivan has posted over 70 items for sale on her Instagram page @w4terforwings.

The plea heard around the world, uttered by George Floyd on May 25 while Minneapolis police officer Derek Chauvin  kneeled on his neck on, killing him, has resonated with many. For some proactive Grady students, Floyd’s cry has served as a catalyst for their art activism.

Student artists have taken to their brushes, embroidery needles and stamps to take a stand against injustice and support the Black Lives Matter (BLM) movement. With all of their proceeds being donated to organizations related to BLM, they have raised over  $1901.

Senior Zola Sullivan uses her Instagram page @w4terinmywings to sell clothing, prints, coin purses and jewelry emblazoned with acronyms related to the movement like BLM. She explained her vision as, “helping something bigger than me.”

“Art has always been a really important outlet for me, especially in times like these,” Sullivan said. “So, I felt like it was kind of a no-brainer for me to create art that helped me get out my emotions while simultaneously helping other people and helping the cause.”

With over 70 items listed on her Instagram account, Sullivan is also fulfilling custom orders in her effort to support the fight against social injustice. She has raised over $960 for the Black Visions Collective and the Center for Black Equity, with $40 of the proceeds also going to help a housing insecure queer black woman whose needs were brought to light on an Instagram account that Sullivan follows.

Sullivan’s favorite piece is a painting entitled, “In the Dark of Night, In the Light of Day.” Describing it as “a protest piece to get my emotions out,” Sullivan depicted a figure’s back profile with a noose around its neck against a split black and white background with the title phrase.

“I feel like it’s a really important message to show that honestly they’re ruthless; the police and the government are ruthless,” Sullivan said. “They don’t care. Even people don’t care. They’ll do it no matter what. It can be as simple as being in daylight. People can see you; people can report it, and it might still not even matter.”

In addition to the acronym “BLM,” Sullivan also features “ACAB” (All Cops Are Bastards) in her artwork. Sullivan believes that the meaning of the phrase has been convoluted at times, with people voicing many definitions of it.

“It [ACAB] derives from the word “bastardize,” which is to be corrupted or to be corrupt, which is what the police system is right now,” Sullivan said. “And, it’s always been that way.”

Sullivan says senior Joanna Baker was an inspiration for selling her art to benefit BLM-related organizations.

Senior Joanna Baker drew a portrait of George Floyd using colored pencils on blue toned paper in order to “make a real piece of art in and of itself to memorialize him.” Through the website Redbubble, Baker sells shirts, masks, buttons and other merchandise with his portrait in order to raise money for the Atlanta Solidarity Fund.

Baker has been unable to attend protests due to COVID-19 and their sometimes violent nature. However, she uses her art as a way to participate in the movement. So far, Baker has raised over $120 from her Redbubble sales.

Like Baker, sophomore Haven Li has used her art as her own form of activism in lieu of participating in the protests. She raffled two drawings to support the Black Lives Matter organization.

“At first, I was going to sell those pieces, and I had a couple of offers on them, but then I realized that I wasn’t doing enough to actively support the cause,” Li said. “So, I decided that a raffle was a good way because it’s not just selling the art and donating the proceeds, it’s having people donate instead of you.”

Li instructed those wishing to enter the raffle to send her proof that they or a family member donated $10 to Black Lives Matter and signed a change.org petition entitled “Justice for George Floyd.” When the raffle ended on June 14, Li raised $215.

Also donating their sales to charity, Class of 2020 alums Nadia McGlynn and Mia Prausnitz-Weinbaum created “Craftin’ A Difference,” an Etsy store where they sell handmade earrings and scrunchies. Eighty percent of sales are donated to Black Lives Matter while the other 20 percent are donated to Direct Relief, a coronavirus fund.

“It’s a way for me to feel like I’m actively doing something whenever I’m making some earrings or knitting a blanket,” McGlynn said. “I’m doing something for a good cause, and it’s fun.”

McGlynn feels encouraged that students and the community are making an effort to support Black Lives Matter.

“I’m so glad that people at our school and people our age around the world and country are taking this into our own hands because we are going to be the people living in America for the next however many years,” McGlynn said. “And, I think it’s great that we are trying to change our future.”

Craftin’ a Difference has raised a total of $246.

Senior Inaya Abdul-Haqq, also inspired by Baker, sells merchandise relating to the BLM movement that feature her own graphic designs on Redbubble and donates all of the proceeds to the Atlanta Solidarity Fund. Her designs feature the phrases “Celebrate Color Rather Than Ignoring It,” “You Advocate for the Aesthetic, I Advocate for My Life” and “Embrace Color, We Are All Beautiful.”

Similarly to Baker and Li, Abdul-Haqq is unable to attend protests, due to coronavirus risks and her immunocompromised mother, so she turned to making art.

Abdul-Haqq’s design featuring the  phrase “You Advocate for the Aesthetic, I Advocate for My Life” was in response to the social media culture that has arisen in the wake of large-scale events such as George Floyd’s death, due to police brutality.

Abdul-Haqq’s sales amount to over $400, with her profits available for donation being over $60.

Junior Della Goines, along with her sister and Class of 2020 alum, Maddie Goines, and Class of 2020 alum Olivia Bransford, founded “OMD (Olivia, Maddie and Della) for a Change” as a “project to raise money to fight racial injustice.” Donating 100 percent of the funds to the Black Visions Collective, Campaign Zero and the Atlanta Solidarity Fund, they sell handmade jewelry and accessories such as bucket hats and keychains.

They accommodate customers with various socioeconomic statuses in a unique way.

“We do a pricing scale, so you’re able to pay what you can contribute,” Della Goines said.

OMD for a Change has raised over $300 for their beneficiary organizations.