the Southerner Online • May 30, 2020 • https://thesoutherneronline.com/76324/comment/my-observations-a-peaceful-protest-turned-violent/ 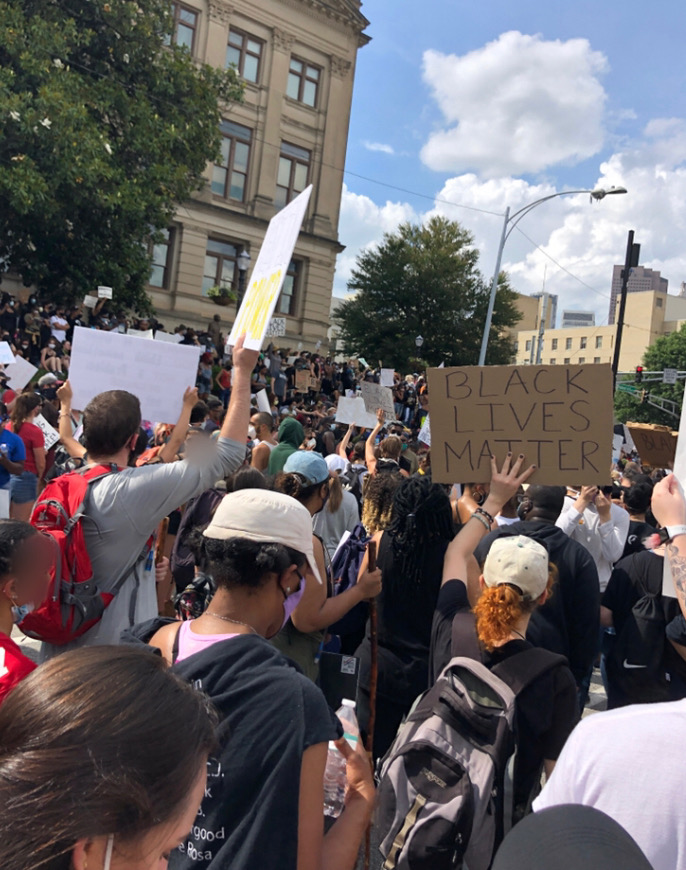 Nonviolent protesters marched to the Georgia State Capitol and gathered to protest police brutality on May 29, 2020 in downtown Atlanta. Some raise their fists as a symbol of solidarity.

The video of police officer Derek Chauvin kneeling on George Floyd’s neck is unbearable and outrageous for anyone to watch, but this incident was a tipping point for me and our city. I don’t know if it was the expression on Chauvin’s face or the bystander’s unsuccessful pleas that made my blood boil the most, but it seemed clear to me that I couldn’t be silent anymore. I decided that participating in the Justice For Us march on Friday May 29 would be the most active way for me to show my allegiance to the grieving black community.

Other than protesters wearing masks and attempting to follow social distancing guidelines, the initial energy of the protest was similar to protests I’d previously attended. Protesters gathered in Centennial Park where volunteers passed out stickers and water. The crowd was buzzing with passion; everyone could feel it in the air. I noticed jugs of milk on the ground, but at the time I didn’t think anything of it. I knew milk was used to wash away pepper spray, but at that point, I was naively optimistic that Atlanta’s protest would be different.

The protest was completely peaceful as we marched to and from the Georgia State Capitol. We shouted “No Justice, No Peace” and other emboldened chants. I didn’t realize how many people were participating until I turned around and saw the sea of protesters that stretched as far as I could see. There were protesters of all ages and races fighting for the same thing. At that moment, I felt the power of numbers and the strength in gathering. It was beautiful. I know I’m painting a picturesque scene, but it truly seemed surreal. There were definitely some protesters who preferred more vulgar chants, but they had every right to: they were simply exercising their First Amendment right. However, on the way back to the Cable News Network (CNN) Center, the tone of the overall protest began to shift. Instead of chanting how we needed justice, protesters focused their attention toward law enforcement officials, chanting “[email protected]#$ the Police.”

I didn’t think that violence would be imminent, but I figured it was inevitable. The news of violent Minnesota protests foreshadowed what could happen here. I was afraid to be tear gassed in a crowd and unsure of how I would handle the violence. I decided to go home before I could possibly get hurt, a decision I’m still conflicted about.

Once home, I turned on the news, eager to show my mom what I had just participated in. When I turned on the television, I didn’t see the protest I had just been part of. I saw a Special Weapons and Tactics (SWAT) vehicle arrive on the scene and protesters starting to deface the CNN sign. I was stunned. After 8 pm, things escalated quickly, and I worried about how the events would end. Quite frankly, I didn’t know what to think or how to feel.

I’ve always considered myself a proponent of nonviolence: I’m anti-war and against gun usage unless completely necessary. However, I do recognize the allure of violence in a situation like this. Some define justice as revenge: properly punishing someone for their actions. How do you punish an entire system? How do you punish those in charge of the punishing? These are the difficult questions my fellow protesters had the burden of answering. Some felt that, as nonviolence hadn’t worked in the past, violence is their only choice. Maybe they’re right. No matter how many marches Black people hold, they will continue to be oppressed in America. That’s the nature of our system. Change seems impossible, and therefore, they are justified in their rage and desire to fight back. I don’t think violence will necessarily accomplish the goal these protesters set out to achieve.

As I watched the protesters burn down cop cars, smash windows and deface buildings, I couldn’t help but feel that our nation has fallen into shambles. Was this anarchy or passion? I still can’t decide. I was angry that the narrative shifted from the protest I was a part of to a dangerous riot, but I understood why it did.

The black community is tired of grieving their lost sons and daughters.

As the coverage continued late into the night, reporters stopped mentioning the fact that the protest was originally peaceful. That seems like a minor detail, but it’s crucial to me. Not mentioning the origin of the riot erases the work of the nonviolent protest.

I’m confused and uncertain, just like our nation right now. I don’t know if the riots will continue or what the long term effects will be. Regardless, this riot, along with similar riots across the nation, made it clear that now is the time for large-scale change in our race relations.

When it comes to the looting and burning, I have mixed opinions. One of my friends recently reminded me that Dr. Martin Luther King Jr said “rioting is the language of the unheard,” and I think that’s true. Violence, in this situation, was used as a last resort. However, that doesn’t justify the destruction of local businesses who had nothing to do with the police violence. What did the small, family-owned Korean restaurant across from Centennial Park do? The family with their small child spent Saturday morning sweeping up glass outside of their restaurant. How does stealing guitars from Maple Street Guitar stop police brutality? The owners must now replace eleven missing guitars and a bashed door amidst an already tough economic situation. What about all of the people who support the cause but now don’t have a job because their workplace was destroyed? I realize that some people found the destruction necessary, but now what?

The same people who threw chairs through windows need to show up at the polls. The same people who spray painted anti-cop messages on the CNN sign need to fill out their census forms. Protesters might have given up on nonviolent means, but our government runs on legislation and accountability. That’s how we create real change. As of right now, Georgia is one of four states that doesn’t have hate crime legislation. Georgia’s hate crime bill (House Bill 426) passed the House and awaits a decision in the Senate. While looting the city might raise awareness about hate, that legislation will only be passed if we hold our lawmakers accountable for our safety. I understand that mistrust in the government and law enforcement is at the core of this issue, but if everyone participates in government, we can change the system to protect the people who are currently under attack. There’s still a long way to go: that’s undeniable. Progress is made in the streets but also at the polls.