the Southerner Online • May 30, 2020 • https://thesoutherneronline.com/76293/comment/students-open-letter-to-police-and-lawmakers/

“We demand change immediately”: A student’s open letter to police and lawmakers 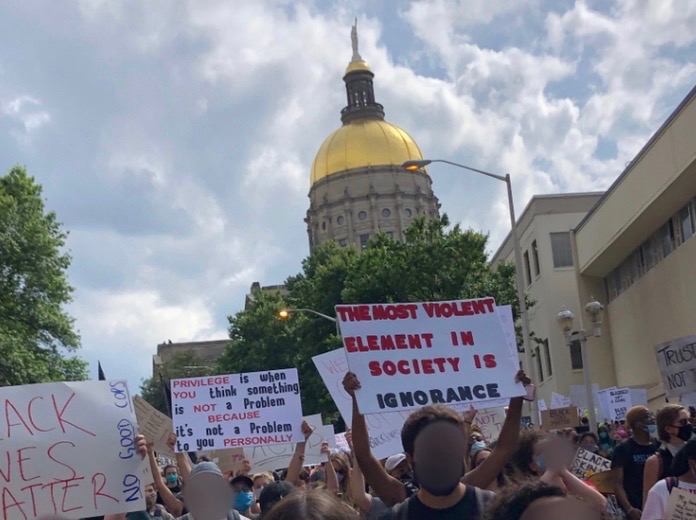 On March 29, 2020, protestors marched from Centennial Park to the Georgia Capitol to the CNN center to nonviolently protest police brutality. Those protests later turned violent.

George Floyd, an innocent black man, was murdered by Derek Chauvin using an illegal and deadly restraint for eight minutes as three other officers watched and did nothing. The restraint was done with the intent to kill, by an officer who had many prior incidences of brutality, as well as a long history of racism as described by his former classmates. Despite the incident being captured on video for millions of people to see, it took four days for Chauvin to be served justice.

The police corruption that enabled the violent and unlawful murders of George Floyd, Ahmaud Arbery, Breonna Taylor and hundreds of other black Americans to occur is present in every police department in America and is in fact a gaping flaw in the system itself. We demand change immediately. The use of violent tactics against nonviolent citizens must be met with swift and harsh consequences, with no exceptions or second chances. De-escalation training and implicit bias training must be expanded like never before along with the immediate dismissal of all officers who fail to apply this training. Additionally, police officers must have thorough knowledge of the law comparable to that of criminal lawyers before they are able to enforce it at the expense of others’ lives.

Each of the three people mentioned — Floyd, Arbery, Taylor — posed no danger to the officers who murdered them, and this is not just a recent pattern: we saw this in 2014 with Tamir Rice, a child playing with a toy gun, Eric Garner, who was selling cigarettes, and dozens upon dozens of others. Even in cases where the victims were armed, such as the murders of Freddie Gray and Philando Castile, they again posed no imminent threat to their killers, who acted purely out of fear, suspicion and racism, rather than “self-defense” as they routinely claimed. None of these victims deserved cold-blooded murder, and many did not deserve police intervention at all. Those complicit in the system tried to justify some of these murders by claiming that the victims resisted arrest, but untrained citizens should not be expected to remain calm and compliant in the face of death while trained officers continue to get away with declaring “fear” as an excuse for violently taking the life of another.

In order to see true change, chokeholds, knee-to-neck restraints and all other forms of excessive force by police need to be banned immediately, and the police who use these methods when their lives are not in immediate danger must be held accountable. Violence should only be the very last resort for officers, yet their position allows them to use it at their own discretion. Therefore, many use it as their first line of action. If their fellow officers do not receive every shred of punishment they deserve for wielding their authority to inflict violence, it is an implied green light to every other officer that such tactics are acceptable. Locally and federally, the police establishment must prove that they are brave enough to change the status quo by drastically curtailing their use of violence and excessive force. Lawmakers must uphold their promise to serve their constituents by pushing for these regulations on a legislative level.

In addition to banning excessive force outright, it is imperative that police departments everywhere evaluate the true effectiveness of their current de-escalation and implicit bias training, bring in expert opinions to improve it and implement more influential programs on a broader scale. When police are not able to demonstrate these skills — as exemplified in nearly every case of police brutality — it is a clear example of gross incompetence that warrants nothing short of firing, in addition to all applicable criminal charges. Any officer who cannot apply the basic self-control needed to de-escalate a nonviolent altercation is not fit to be an officer, and neither is any officer who cannot apply the law fairly and equitably because of personal biases. Sadly, little action has been taken because such an enormous percentage of officers fall into one or both of those categories. However, every single one of those officers is a danger to public safety, and we cannot even begin to have a just law enforcement until all of them are removed from public service. This is a dire situation caused by a systematic flaw that warrants drastic action, and all police institutions not willing to take such action are proving themselves to be complacent in this injustice and therefore guilty of upholding it.

In Georgia, my home state, the time allocated for police officers to be trained in the law and entrusted to enforce it is 11 weeks, according to the Georgia Public Safety Training Center. By comparison, it takes four years of college education and three years of graduate school to earn a law degree. To practice, lawyers must then complete the bar examination, an incredibly rigorous and competitive test on the law and its applications, and these requirements are just the tip of the iceberg. Our country has decided that it takes at least seven years, often more, to have a comprehensive understanding of our law code — yet the police, whose very job is to enforce that law code, supposedly learn it in less than three months. No matter how much legislation we pass to try to achieve justice, or how intensive our bias and de-escalation training is, our system will always be broken to the core if those meant to enforce the law don’t even have a comprehensive understanding of it. There is no excuse. Police officers must be held to the same standards as criminal lawyers, or greater, and should in no circumstances be able to wield as much power as they do based upon only a surface-level interpretation of the law.

The explicit racism involved in each case of police brutality is especially apparent when considering the double standard between white and black police confrontations. For example, Dylann Roof, who murdered nine black Americans in a church, was peacefully arrested and given Burger King by police. There is simply no way to say that the violent, cold-blooded murders of innocent black citizens or black nonviolent offenders are “not about race” when white, armed mass murderers can be taken into custody unscathed. Every state, city and police station in this country is guilty of this double standard, regardless of whether they were directly involved in a recent incident of police brutality. By being complicit in the actions of other officers and not fighting for reform as fiercely as possible, they are bystanders who are not absolved of responsibility any more than the murderers themselves are. Every single police officer who continues to support the status quo following these murders is accountable for upholding this racist and unjust system.

Anyone who claims to respect our Constitution, including every public servant in this country, should be infuriated right now because police brutality is at direct odds with the natural rights enumerated in the Constitution. Both the Fifth and Fourteenth Amendments bestow all citizens with the right to due process: fair treatment and normal progression through the judicial system. Each and every victim of police brutality has been denied this most fundamental right. Whether the victim committed a crime or not, in every single incident a police officer decided that they deserved the death penalty for their actions — execution by a trial of one. They never saw a shred of the judicial system before they paid the ultimate price. The police establishment is entirely antithetical to the principles outlined in the Constitution. Complete reform and replacement is not optional, it is necessary.

The corruption that runs through our police system has plagued minorities for centuries, yet it still remains one of the biggest dangers to public safety and democracy that we face. It is the responsibility of every police officer and lawmaker to exercise their influence to the fullest extent to make sure that no black person ever dies at the hands of a police officer again.