the Southerner Online • May 18, 2020 • https://thesoutherneronline.com/76090/comment/critters-and-construction-abound-on-campus-during-distance-learning/

Critters and construction abound on campus during distance learning 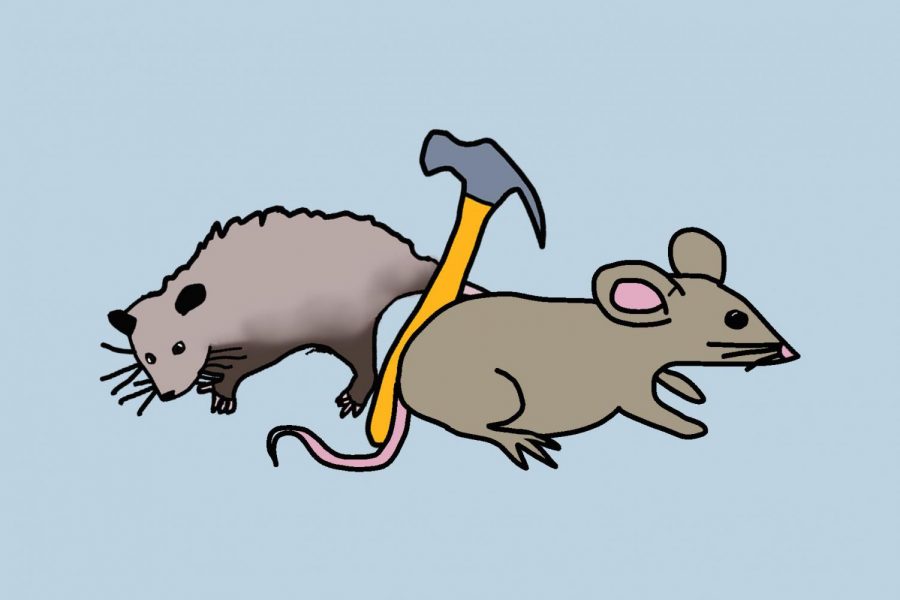 While students and teachers are working from home, the campus is still bustling with construction and critters.

If one was to enter Grady’s campus right now, it would look a little different than normal. Grady and other schools around the globe are currently distance learning due to the coronavirus outbreak, meaning teachers, students and staff are working from home. However, that doesn’t mean campus is deserted.

Construction on a new building at Grady started when school closed in mid-March, and the fewer people on campus has caused an unprecedented rise in productivity.

“We’re done. The building’s finished,” project lead Mitchell Davidson said. “It was supposed to take around two years, but we’re done. Apparently having no students around made our crews much more productive. We had extra time and money in the budget too, so we built a parking deck with enough room for every single student to park their car and an Olympic-sized swimming pool.”

Even though parts of the school have been updated, others have been overrun by Grady’s ever-present animal population. Due to decreased foot traffic, the critters can finally scurry out from under the building without getting trampled and have claimed a large amount of the currently empty school as their territory.

“Even though we did make a lot of progress, other parts of the school have been completely destroyed,” construction worker Matt Roper said. “The theater is pretty much an exact replica of the rats’ home in Ratatouille. The entire C-wing is completely overrun by possums — we sent a guy in there to check it out. He didn’t come back. The E-wing belongs to the hawks though — they nested in all the old papers in the journalism room. You should see the two groups fight over the C-200 intersection. It’s pretty brutal.”

Even though animals have taken over the entire school, administrators and teachers have had to return to pick up left-behind materials.

“Yeah, when I came back, I had to Heely down the hallways to make sure the animals didn’t catch me,” civics teacher Cathy Browall said. “You have to go down the hallways really quickly to make sure you aren’t eaten or get too close to any other staff member out of risk of infection. The animals got into the unused chemicals from the chemistry labs, so there’ve been some spontaneous mutations, making them gigantic and rabid. Everyone’s bringing in their own transportation — scooters, hoverboards. It would be pretty fun if we weren’t worried about being dragged into the Black Box Theater and eaten.”

“It’s been so relaxing,” Browall said over a Zoom call, where she was sitting poolside playing Animal Crossing: New Horizons. “Even though I’ve been teaching for a while, there are still problems here and there, and through this whole experience, I’ve figured out what the one obstacle to optimal teaching is: students.”

Browall and other teachers, such as music teacher Yolanda Price, are enjoying the “corona-cation”, as Browall put it, a little too much.

“Turns out it’s way easier to teach music when you don’t have to listen to students,” Price said. “I can focus purely on teaching and not be distracted by the distinct lack of talent among my students.”

While teachers such as Price and Browall are thriving, students don’t seem to be doing so well.

“I don’t know what day it is. I don’t know what time it is,” junior Nick Douglas said. “Before this, my only source of direction was the sweet, calming sounds of the Grady bell schedule. Without that, I’m lost. All I can do is scroll through TikTok and cry.”